I first ran into F Anstey's comic recitations Burglar Bill and The Conscience-Curst! out of context in A Century of Humorous Verse, so it was a pleasure to find the full set in the Internet Archive: Burglar Bill, and other pieces for the use of the young reciter. With introduction, remarks, and stage-directions (1888, London : Bradbury, Agnew, & Co. - burglarbillother00anst). Originally published in Punch, they are do-able as recitations, but are actually a satire on the whole recitation format.

The title recitation, Burglar Bill - annotated with helpful directions to the reader - tells the maudlin story of a hardened burglar whose heart is touched by a meeting with a twee child. 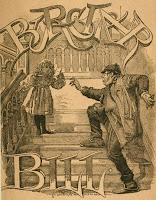 Can it be his guardian angel,
Sent to stay his hand from crime?
[In a tone of awe]
He could wish she had selected
Some more seasonable time!
[Touch of peevish discontent here]

"Go away!" he whispers hoarsely,
"Burglars hev their bread ter earn.
I don't need no Gordian angel
Givin' of me sech a turn!"
[Shudder here, and retreat, shielding eyes with hand]
[Now change your manner to a naive surprise; this, in spite of anything we may have said previously, is in this particular instance NOT best indicated by a shrill falsetto]

But the blue eyes open wider,
Ruby lips reveal their pearl:
[This must not be taken to refer to the Burglar]
"I is not a Garden anzel,
Only — dust a yickle dirl!"
[Be particularly artless here and through next stanza]

All turns out well, when he helps the yickle dirl, Bella, by using his burglaring tools to open the stuck door of her doll's house. Declining the offer of meeting her family, he returns home a sadder and wiser man.


In a garret, worn and weary,
Burglar Bill has sunk to rest,
Clasping tenderly a crumpled
Cheesecake to his burly breast.
[Dwell lovingly upon the word "cheesecake," which you should press home upon every one of your hearers, remembering to fold your hands lightly over your heart as you conclude. If you do not find that several susceptible and eligible bachelors have been knocked completely out of time by this little recitation, you will have made less progress in your Art than may be confidently anticipated]

The other recitation I'd seen before is comic horror: The Conscience-Curst! tells of a stranger who confesses to a village policeman to the serial murder of various uncles.

As before, you should devote special attention to your title, which may be announced after this fashion. Stalk into the middle of the room or platform, with one hand in your bosom and your eyes staring as in a trance. Then, in a hollow voice, hurl the name of the poem at the nearest old lady:

THE CONSCIENCE-CURST!
[And, if you do it properly, she will jump like anything]

The night-owl shrieked: a gibbous moon peered pallid o'er the yew;
The clammy tombstones each distilled a dank unwholesome dew;
[Shudder here with your shoulders]
As through the sleeping village passed a wight of aspect weird,
Whose haggard face was half obscured by a long neglected beard.
[In order that the audience should grasp this idea, you should pass your hand lightly over your chin]

His convex spectacles gave back the gleaming of the moon,
He wore a pair of overcoats, although the time was June.
[Give a dark significance to this piece of apparent eccentricity]
Two slippers wrought in faded wools hid his ungainly feet,
And he danced a grisly polka-step all down the silent street.
[You might just indicate this, if you think you can do so in a sufficiently ghastly and impressive manner; otherwise — don't]

"My Uncle Joseph sold ('purvey,' I think, he termed it) meat,
His veins with vital fluid were abnormally replete!
[Close your eyes, and shiver here, as if at some unpleasing reminiscence]
Who would have thought so old a man ——?... [with a dazed abruptness]
Enough! — Within the tank
I flung the still unconscious corpse of my favourite Uncle Frank!
[Here you should strike the attitude of a man who is hurling a favourite uncle to his doom]

Burglar Bill, and other pieces for the use of the young reciter satirises various styles: "Sympathetic Artless"; "Sporting Sensational"; "Tear-Laden Domestic"; "Melodramatic Weird"; "Low-Life Realistic"; "Transatlantic Familiar"; "Sensually Harrowing"; "Marine Emotional"; "Bucolic Buttonholing"; "Triumphant Tragic"; "Voluptuously Melancholic"; and "Homely Pathetic". They're very worth reading, taking a dig not only at recitation but at late-Victorian poetry genres in general. Gaslight (a nice resource of Victorian weirdness) has a sampler here; and as I said, the full batch is here.

F Anstey - Thomas Anstey Guthrie - isn't much remembered these days, but as a late-Victorian / early 20th century writer he left a surprising trail of adaptations. It seems likely - though I've not seen direct confirmation - that Janet and Allan Ahlberg's Burglar Bill is loosely based on the Anstey character; his novella The Tinted Venus as adapted into the Broadway musical and film One Touch of Venus; The Brass Bottle became a movie more than once (e.g. The Brass Bottle); and the story Vice Versa: A Lesson to Fathers (a comedy in which a father and son magically switch bodies - see Gutenberg EBook-No. 26853) has been multiply filmed - see Wikipedia).

Check out F Anstey works online: Project Gutenberg / Internet Archive; they're variable but interesting.  His Baboo Jabberjee and A Bayard from Bengal comes across as a bit racist by modern standards, but are nevertheless socially well-observed 'outsider commentary' comedies about an educated-but-naive Indian character struggling with the foibles of English society.  Ones particularly worth checking out those - commercially unsuccessful, which is a pity - are those where Guthrie broke away from his Punch typecasting as a comic writer. The Statement of Stella Mabberly, for instance, is a pretty good psychological horror novel; and the 1891 Tourmalin's Time Cheques (1891) is in SF/fantasy territory. It tells of Peter Tourmalin, bored on a long ship journey who makes a deal with a 'time bank' enabling him to draw 'time cheques' that revisit previously deposited hours if he wants to take a break from routine.  He deposits the rest of the journey, and instantly finds himself at home in the middle of planning arrangements for his marriage. When he draws the cheques, however, they drop him into increasingly fraught out-of-sequence segments of the timeline aboard the ship, and complications increase as the interest accrued on the time deposit adds extra time where he revisits segments already experienced.

See Brian M. Stableford Yesterday's bestsellers: a journey through literary history, pages 69-, for a good overview of Anstey and his works; it mention's Anstey's largely unexplored talent for darker fantasy. Despite his success as a humorist, he expressed in his autobiography, A Long Retrospect (sampled here at Gaslight), his regret at the lack of success of his serious works.
- Ray
at 09:07