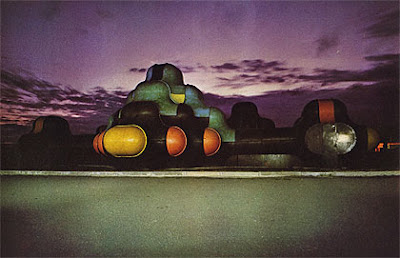 Something that just surfaced from the sludge of memory while I was browsing an article on minimal surfaces: Fifth Dimension, also called the Girvan Fun Palace, which I visited on a family holiday in the early 1970s during what must have been its very short life. It was an extremely odd development for Girvan, what was then a very staid small-town Scottish seaside resort: Keith Albarn's sub-psychedelic installation of modular coloured fibreglass units ("Ekistikit") where you walked through various womb-like rooms containing sensory experiences: sounds, lights, hanging plastic objects to push through, and so on.

VADS (the Visual Arts Data Service - worth browsing in general) has an article online with more images: see Funny business at the seaside, Alastair Best, pp 58-61, Design Journal, 251, 1969. As it says, initially the futuristic experience was somewhat diminished by the central dome's incongruous rock garden full of plastic potted plants; a problem explained by a letter in Design Journal 255:

Sir: In "Funny business at the seaside" (DESIGN 251/58-61) Alastair Best made some scathing references to design failures in Keith Albarn's Fifth Dimension Fun Palace on the Girvan foreshore which caused the Fun Palace to fall somewhat below Albarn's fondest hopes.

We should like to point out, however, that Girvan Town Council was not insensitive to the incongruity of plastic rock gardens and revolving daleks amongst feeble strobes, electronic music and easily detected soft floors. These crept into the design when it became obvious that a complete "psychedelic" experience would not be ready in time for the 1969 summer season.

Girvan Town Council has engaged our company to renovate the interior of the Fun Palace. To do this we have rethought the entire interior, including the transparent sides of the building - which have now been made opaque. The result is a stimulating audio-visual and sensual experience throughout.

... the interior has been recast from start to finish by two young men calling themselves "Electroscope.'' For Denis Barns, painter (Glasgow School of Art) and John Ballantyne, scientist (Strathclyde University) this is their first big commission. Strobe lights and hanging objects in the dark, hectic colours in patterns and shapes that fight the form, sudden spatial contrasts, eerie lights and an assortment of noises from murmurings to mindmelting screechings are old tricks - but they still work when used with all-round intelligence, as here. The warren of cells and tunnels and sudden loftier chambers presents at least half-a-dozen respectable visual excitements, as, for instance, when the almost subliminal strobe light (black and silver) of one cell slows down and takes on colour in the next.

The ''feelie" element is nowhere as sophisticated as this (near the entrance, for example, you find yourself bound to struggle - and it is a struggle - through a dense forest of heavy hanging objects) although further in there is a pitch-black vault with a teetering floor, where the barrel walls' all repetitive domes and angles like a Camargo relief, invite finger exploration for just as long as the ears will stand a hideous electronic crescendo.

The loftiest chamber, white and luminous, might have come straight from the set of Doctor Who with its do-it-yourself switchboard to alter lights and sounds. Finally another dark tunnel with fairy lights snaking endlessly away to the right (mirrors) leads you through a structure of translucent cubic boxes of coloured plastics sheets, ambigious and rather beautiful in a fairy castle kind of way. Then the boxes solidify, become white and gleaming in what you realise is not electricity now, but sunshine.

A good two shillings worth (children half price) of anyone's money, wet day or fine.