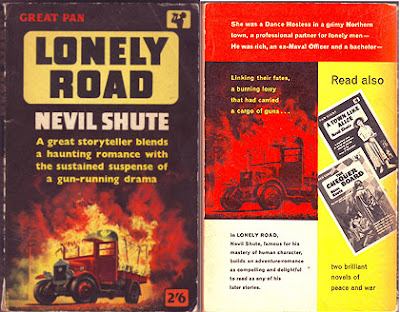 I suppose this comes under the lurid cover category: the rather vigorous Pan Books cover for Nevil Shute's 1932 Lonely Road, one of his early novels. It's somewhat cross-genre - a thriller, with elements of tragic romance, set against the discovery of a conspiracy:


She was a dance Hostess in a grimy Northern town, a professional partner for lonely men—
He was rich, an ex-Naval Officer and a bachelor—
Linking their fates, a burning lorry that had carried a cargo of guns...

Malcolm Stevenson is a ex-naval officer, a loner haunted by his experiences during the sinking of his Q Ship in World War 1, who runs a small fleet of schooners out of Dartmouth. On a drunken night drive, he stops to stroll down to the seashore near Slapton, and sees a boat being unloaded. He speaks briefly to a young woman, who evidently thinks he's someone else, but is then knocked on the head, and wakes up in hospital to be told he had a motor accident. Pursuing the incident via family and Intelligence contacts, he learns of other associated incidents - particularly the find of a burnt-out lorry containing unbadged guns - that suggest he ran into a gun-running plot. By extreme coincidence, on a visit to Leeds, he befriends Molly Gordon, a young dance hall hostess nicknamed "Sixpence", whose lorry-driver brother has been involved in some shady dealings, and he suspects a connection. He takes her to Devon, initially as a possible information source, but as his investigations proceed, he falls in love with her, while realising that an even deeper conspiracy exists, apparently to land agents in Britain. This leads to an attempt on his life by shooting, which leaves him unscathed but injures Molly and one of his colleagues. Stevenson pursues the perpetrators by boat under worsening sea conditions, and deliberately manoeuvres them into a position where they are wrecked. Returning, he finds Molly severely ill, and she dies of an infection. Later, he confronts the mastermind of the plot - a Professor Ormsby at Cambridge who wishes to rig the British election in favour of the Conservatives - and offers him the choice of exposure or suicide. Ormsby chooses the latter. Stevenson, content with the political outcome at least, returns to work; but, the framing device tells us, goes on to die prematurely at 39 ... perhaps of his war injuries, but (it's implied) more likely of a broken heart.

Shute attempts some innovative writing quite successfully, when in the first chapter Stevenson, on the drunken evening out that leads to his encounter with the smugglers, goes through stream-of-consciousness scene shifts between present and past. In the preface he writes:


The first chapter was quite frankly an experiment, and one which pleases me still. It was a dangerous experiment, however, for a young writer to make in the first pages of a book, for it defeated a good many readers who might have enjoyed the story if they had been able to read on. In spite of this the book did moderately well in this country and in America. In 1936 a film was made from it at the Ealing Studies, starring Clive Brook and Victoria Hopper.

It's also, for location spotters, a novel of Devon interest, especially if you like maritime matters. Unfortunately I've lost the correspondence, but a few years back I discussed with a Nevil Shute enthusiast possible locations for the incident in the first chapter: a bend in the Dartmouth to Slapton Road where pasture leads down to sandhills and the sea. The road and beach profile has almost certainly changed from the time Shute wrote it - pre-WW2 - but somewhere near Strete Gate looks plausible.