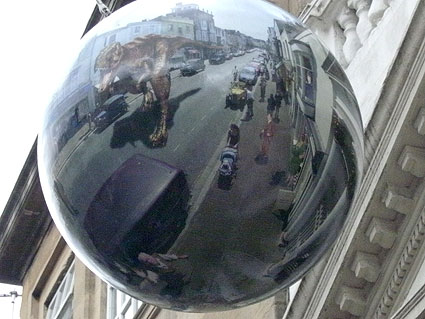 Ryde, Isle of Wight (mentioned in passing, previously) is a place I normally never see except in transit; it being the FastCat terminus for Portsmouth, we're usually in a hurry, carrying luggage, en route to or from Newport. On our recent IOW visit, however, Clare and I fitted in a half-day there.

It's a slightly odd town. The sea-front is a long draughty north-facing promenade - with a beach that was very smelly when we visited, allegedly due to rotting seaweed - that hasn't altered in essence since the 1960s, and the very steep main street is mostly an unexceptional town shopping street with the usual complement of charity shops. There's a slight air of neglect, the paint peeling on deco and Victorian villas whose construction suggests a lot of smart money in the town - but a century or more ago. But amid all this, Ryde does have a degree of redevelopment, and a good selection of quirky and interesting independent shops; for example, in the refurbished Royal Victoria Arcade there are some good music, memorabilia and book shops (I managed to find a copy of Isle of White Ghosts III, which features my great aunt's house).

More or less opposite the arcade is another highlight: the Donald McGill Museum. It's behind the Orrery Café, which is interesting in itself for the giant grasshopper on the roof, the trompe-l'œil globe hanging outside (which looks like a mirrored sphere until you notice that it isn't reflecting you, and contains a Tyrannosaurus), and the Alice in Wonderland / astronomical decor done in association with Greaves & Thomas, the Ryde-based commercial globemakers. 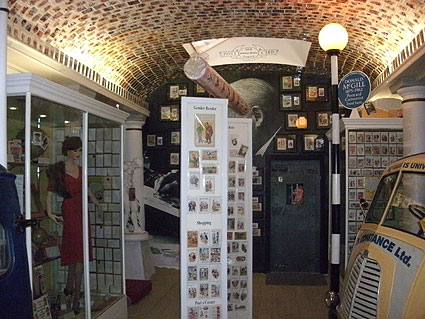 McGill - see Wikipedia - was the classic exponent of double-entendre seaside postcard art, producing some 12,000 postcards.  The one-room museum behind the cafe documents his life and work from its successful era, via a nadir in the 1950s that saw his prosecution and police destruction of cards, to a modern revival where his original works are worth thousands of pounds. I'd never previously seen his wartime anti-Nazi propaganda cards, nor the homophobic ones that invariably depict gay men as wearing makeup, pageboy hairstyles and exaggerated Oxford bags trousers. Whether you find the works quaint and inoffensive by modern standards, or reflective of a ghastly era with multiple prejudices, the museum is very worth a visit.

Personally, I don't find them very troublesome; the redeeming feature is that everyone is insulted; for every card with a sexist depiction of women, you can find one depicting lecherous men as buffoons. George Orwell, despite not knowing whether McGill was a person or a house name, wrote an an astute analysis in 1941, "The Art of Donald McGill" (Wikipedia / article online) that argued McGill's work to be an authentic expression of an irrepressible side of working-class human nature that rebels against high-minded middle-class values.

Society has always to demand a little more from human beings than it will get in practice. It has to demand faultless discipline and self-sacrifice, it must expect its subjects to work hard, pay their taxes, and be faithful to their wives, it must assume that men think it glorious to die on the battlefield and women want wear themselves out with child-bearing. The whole of what one may call official literature is founded on such assumptions. I never read the proclamations of generals before battle, the speeches of fuhrers and prime ministers, the solidarity songs of public schools and left-wing political parties, national anthems, Temperance tracts, papal encyclicals and sermons against gambling and contraception, without seeming to hear in the background a chorus of raspberries from all the millions of common men to whom these high sentiments make no appeal.
...
They stand for the worm's-eye view of life, for the music-hall world where marriage is a dirty joke or a comic disaster, where the rent is always behind and the clothes are always up the spout, where the lawyer is always a crook and the Scotsman always a miser, where the newly-weds make fools of themselves on the hideous beds of seaside lodging-houses and the drunken, red-nosed husbands roll home at four in the morning to meet the linen-nightgowned wives who wait for them behind the front door, poker in hand. Their existence, the fact that people want them, is symptomatically important. Like the music halls, they are a sort of saturnalia, a harmless rebellion against virtue. 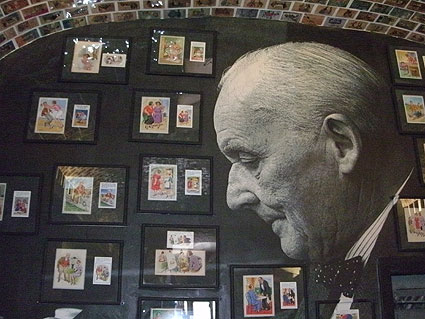 See the official museum site - www.donaldmcgill.info - for more background. The British Cartoon Archive has a couple of hundred McGill cards.