To Moretonhampstead and back 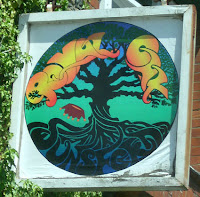 I like the sign for the Royal Oak inn at Dunsford, Devon. I don't know who painted it, but the psychedelic-era retro style is surprising to see in a very traditional village: yet it works. I especially like the way the word "Dunsford" is incorporated into the tree roots.

I photographed it while the bus was stopped on the way back from Moretonhampstead (we were visiting my mother-in-law in hospital there). The 45-minute bus trip from Exeter (the Country Bus 359) is worth doing, as it goes through remarkable countryside. First climbing from Exeter, through rolling foothills with deeply-cut valleys, as far as Dunsford, it then reaches a striking escarpment - see Geograph - when it crosses the River Teign at Steps Bridge, and continues to climb up one side of the wooded gorge of the Teign past an alpaca farm before dropping slightly to Moretonhampstead, which is in a kind of bowl-shaped plateau with views of Dartmoor's uplands beyond.

The whole terrain is highly explicable geologically: see the geological map of Devon. As far as the Teign, the road is crossing Carboniferous sandstones, and the escaprment is the edge of the outcrop of Dartmoor granite. It's so handily reachable from Exeter that we'll definitely go back to walk there some time.

As the DEM (left) shows, Devon is extremely hilly, with rapid elevation changes. The flood plain of the Exe (Exeter is the yellow dot) is about the only moderately large flat part of Devon.