Ameliaranne and the Linking R 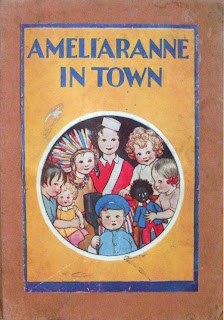 I've just been reading the 1930 Ameliaranne in Town, one in the long series of early 20th century children's illustrated books published by George Harrap and featuring the adventures of Ameliaranne Stiggins.  Ameliaranne is a country girl who lives in an unnamed village with her washerwoman mother Mrs Stiggins (no Mr Stiggins ever makes an appearance) and five younger siblings. The series started in the 1920s with Ameliaranne and the Green Umbrella, written by Constance Heward and illustrated by Susan Beatrice Pearse; the latter (a prolific illustrator of book and cards) drew the series throughout the unageing Ameliaranne's thirty-year career, while the stories were written by various authors including Heward, Natalie Joan, Margaret Gilmour, Eleanor Farjeon, and Ethelberta Morris.

The stories tend to be rather slight. Ameliaranne is a helpful and competent girl who goes around overcoming difficulties in largely realistic circumstances. For instance, Ameliaranne in Town tells of her visit to an aunt in London who has connections with a large toy store. Due to a mix-up, she isn't collected at the station, but safely negotiates the Underground and gets to her aunt's house unaided. Later, she is accidentally locked in the toy store, but is unafraid, finding a bed to sleep in, and guarding its four corners with four benign toy animals she identifies with the Matthew, Mark, Luke and John of her bedtime prayer. When a fire breaks out on a floor below, she raises the alarm and helps fight the fire, and consequently she and her family are rewarded by the directors of the store. 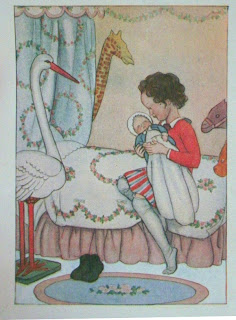 A cynic might find Ameliaranne a poster-girl for the clean, pious and socially obedient working-class. DL Kirkpatrick's Twentieth-century Children's Writers (1983) notes that the feisty little girl of the early books (in Green Umbrella she tries to smuggle food from the Squire's tea-party for her siblings, who can't attend through illness) became "a collection of virtues" toward the end of the series. Nevertheless, the books are very charmingly illustrated and the stories satisfyingly resolved; they've become highly collectable.  See Ameliaranne and other stories ... and Ameliaranne and knitted elephants for more pictures (and of course Google Images).

A point that became forgotten as the series proceeded was the origin of the name "Ameliaranne" - quite clearly a representation of "Amelia Anne" or "Amelia-Anne" with the linking/intrusive r that appears at vowel-vowel transitions in some UK dialects. This is explicit in the very first imprints of Green Umbrella, where both the cover and text refer to the heroine as "Ameliar-Anne" (as in the image at this post at the blog Umelecky Reconsidered).

Her name was Ameliar-Anne Stiggins. She was a pale child with black hair which she wore in curl rags from Friday night till Sunday morning. Her mother was poor and took in washing; because, besides Ameliar-anne, who was the eldest, there were some five other little Stigginses to feed.

This r-insertion and the country setting, we can assume, fits into with Ameliaranne being among the now-diminishing rhotic rural speakers of southern England. I'm not sure much else can be deduced about her background, because the writers didn't make much attempt at dialectical consistency. In Green Umbrella, she speaks with a dialect more consistent with urban London (with its dropped aitches and hypercorrected form of "awful") ...

"Oh sir, I'm glad you saw, 'cos I didn't take a bit more'n what I could easy 'ave ate; and the five of them's got colds in their 'eads, and when I left them they was all howlin' somethink horful, and I couldn't bear to go home and tell them everything and them not 'ave a bite, as you might say."

... but in Ameliaranne in Town, her speech shows no sign of any non-RP dialect at all.

Constance Heward et al weren't the only authors to note the r-phenomenon as it manifested with the name "Amelia", and "Ameliar" crops up in a number of late 19th century and early 20th century texts.  For instance:

Deer Ameliar—I ope this finds you well, as it leaves me at present. I received your kynd note, which as I now confess I did not expect, for I know well the duties of high life take up a great deal of time ...
- p222, The Ganges and the Seine: scenes on the banks of both, Volumes 1-2, Sidney Laman Blanchard, 1862

One cried out " Oh !" the other began to laugh; and with a knowing little infantine chuckle, said, " Missa Pen-dennis !" And Arthur, looking down, saw his two little friends of the day before, Mesdemoiselles Ameliar-Ann and Betsy-Jane. He blushed more than ever at seeing them, and seizing the one whom he had nearly upset, jumped her up into the air, and kissed her : at which sudden assault Ameliar-Ann began to cry in great alarm.
- p125, The History of Pendennis, William Makepeace Thackeray, 1869

"You won't have to wait long. There's apoplexy in that woman's red face and short neck, as sure as my name is Ameliar Berringer."

Mrs. Berringer was not above introducing a superfluous " r " at the end of a word, any more than she was above uttering virulent ill-nature, in spite of her "good-heartedness," against her professedly dearest friend.
- p300, Only Herself, Annie Thomas, 1869

A few passers-by, attracted by Ameliar's cries, have collected round them, and are looking on with that eager, delighted interest in a "row" always manifest on such occasions.
- A great mystery solved: a sequel to 'The mystery of Edwin Drood', by Gillan Vase, Elizabeth Newton, 1878

But though authors tended to stereotype it as a feature of uneducated speech (or American speech), the reality was (and still is) quite different. As I mentioned previously, the philologist Henry Sweet was probably the first to notice that it was also an unacknowledged feature of educated Southern English speech.

The fact is that the statements of ordinary educated people about their own pronunciation are generally not only valueless, but misleading. Thus I know as a fact that most educated speakers of Southern English insert an r in idea(r) of, India(r) office etc. in rapid speech, and I know that this habit, so far from dying out, is spreading to the Midlands; and yet they all obstinately deny it. The associations of the written language, and inability to deal with a phonetic notation, make most people incapable of recognizing a phonetic representation of their own pronunciation.
- A Primer of Spoken English, 1890, Preface, page viii.

Addendum: if this is a general phenomenon, one might predict that it would appear in relation to similar names. It is: again, used by authors as a marker of non-prestige speech.

"Sartain, ma'am, he gin it to me hisself; an' he said I should 'form you, Miss Celiar, he would n't be so ill-mannerly as to send his bill, only as his landlord craved him for money, an' he was out of pocket."
- "The Travelling Artist", AMF Buchanan, Godey's Magazine, 1840

Now Hamlet was a prince upon
A throne, and flunkeys kep';
So never did conductin' on
A humble bus door-step.
They call him a philosophar,
Who overtaxed his brain;
His treatment of Opheliar
Vos certainly insane.
- "The Cockney Bus Conductor", Woodin's whimsies: satiric, comic and pathetic, W. S. Woodin, 1868

I wouldn't hurt you for the world, you know that, Ceciliar." The girl winced slightly ; his pronunciation of her name was one of the little things that grated on her sensitive taste ; but a superfluous letter or two lose force when the aggressor is handsome and spirited.
- Donahoe's Magazine, 1892