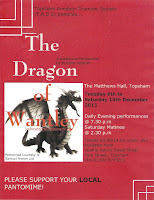 Recent post refreshed, in case I have local readers, as a reminder of the current TADs pantomime. Do check it out; I had a peek this evening and was tickled to find one of the numbers is my favourite movie song, Happy Working Song from Enchanted.

Topsham town is in great peril! The beautiful surrounding countryside has been sold to property developers incurring the wrath of the vengeful forest fairy Mauxalinda. Angered at the prospect of a Tesco superstore, she places a terrible curse on Topsham and all its people. Only the dashing principal boy Squire Benjamin can save them but in his way stand the devious Walter de Warthog, Mauxalinda, her evil henchmen and one very hungry dragon...

With a large and colourful cast including idiot bailiffs, a good witch, two outrageous 'dames' and a dancing horse the TADS 2011 Pantomime is packed with comedy and dramatic spectacle and promises to be a real festive treat for all the family.

Group concessions will be available on Tuesday 6th at dramatically reduced rates for eligible groups. Any community youth groups, schools, Scout/Guide groups etc who would like to attend should email rekadom@hotmail.co.uk for further details.

The background to this is interesting, because this is a modern retelling of a story that goes way back, and it retains the original's anti-capitalist sentiments.  As the Wikipedia Dragon of Wantley article explains, it was an anonymously written satire in the style of a mediaeval ballad, portraying a legal battle about parish tithes in Wharncliffe, near Sheffield. The lawyer More of More Hall is portrayed as a knight slaying the dragon, representing Sir Francis Wortley. The version in Percy's Reliques of Ancient English Poetry has a footnote explaining the origins - see page 417 - though, given the general murkiness of historical recollection, the explanation feels far too pat.

The earliest version of the ballad appeared in the 1685 broadsheet A True Relation of the dreadful Combate between More of More-Hall, and the Dragon of Wantley, which you can read at the English Broadside Ballad Archive (record 22210) or in an early reprint in Playford and D'Urfey's Wit and mirth; or pills to purge melancholy (being a collection of the best being a collection of the best merry ballads and songs, old and new. Fitted to all Humours, having each their proper tune for either Voice or Instrument : Most of the Songs being New set), Volume III (see pages 10-15).

The fight (which the knight wins by hiding in a well and hitting the dragon in the mouth as he drinks, then kicking him in a tender spot with a spiked boot) is described in robust language ...

14.
Oh, quoth the Dragon, pox take you come out,
Thou that diſtrub'ſt me in my Drink;
And then he turn'd and ſhit at him,
Good lack how he did ſtink!
Beſhrew thy Soul,
Thy Body is foul,
Thy Dung ſmells not like Balſam;
Thou Son of a Whore,
Thou ſtink'ſt ſo ſore,
Sure thy Diet it is unwholeſome.
...
17.
At length the hard Earth began for to quake,
The Dragon gave him ſuch a knock,
Which made him to Reel,
And ſtraight way he thought
To lift him as high as a Rock;
And thence let him fall,
But More of More-Hall,
Like a Valiant Son of Mars;
As he came like a Lout,
So he turn'd him about,
And hit him a kick on the Arſe.

18.
Oh! quoth the Dragon, with a Sigh,
And turn'd ſix times together,
Sobbing, and tearing, Curſing and Swearing
Out of his Throat of Leather.
Oh, thou Raskal,
More of More-Hall,
Would I had ſeen you never,
With the thing at thy Foot,
Thou haſt prick't my Arſe Gut;
Oh, I am quite undone for ever.

19.
Murder, Murder, the Dragon cry'd,
Alack, alack, for Grief,
Had you but miſt that Place, you could
Have done me no Miſchief;
Then his Head he ſhak'd,
Trembled, and Quack'd,
And down he layd, and cry'd;
First on one Knee,
Then on back, tumbled he,
So Groan'd, Kick't, Shit, and Dyed.

... and tends to be bowdlerised in many later editions. For example:

It is not strength that always wins,
For wit doth strength excel;
Which made our cunning champion
Creep down into a well,
Where he did think this dragon would drink,
And so be did in truth;
And as he stooped low, he rose up and cried, boh!
And kicked him in the mouth.

Oh! quoth the dragon, with a deep sigh,
And turned six times together,
Sobbing and tearing, cursing and swearing
Out of his throat of leather.
More of More-hall, oh thou rascal!
Would I had seen thee never!
With the thing at thy foot thou hast pricked my throat,
And I'm quite undone forever!

Murder, murder, the dragon cried,
Alack, alack, for grief;
Had you but missed that place, you could
Have done me no mischief.
Then his head he shaked, trembled and quaked,
And down he laid and cried;
First on one knee, then on back tumbled he;
So groaned, and kicked, and died.

The satirical tradition for the story continued in one early adaptation. One was Henry Carey's 1737 "Burlesque Opera", which I guess could be viewed as an adult pantomime satirising operatic staging, with a political dig at Robert Walpole's tax policies. The full libretto is at the University of Virginia Library, The Dragon of Wantley. There's a brief account of it on pages 165-166 of Busby's 1825 Concert room and orchestra anecdotes of music and musicians. Carey wrote a 1738 sequel, Margery; Or, A Worse Plague than the Dragon.

Another take on the story was Owen Wister's 1892 The dragon of Wantley, his rise, his voracity, & his downfall, a romance. Well off Wister's best-known territory (he was author of the groundbreaking Western The Virginian), it's a romantic burlesque. During a Christmas drinking session, the sacristan of the monastery of Oyster-Le-Main has a fright when he opens a cupboard to fetch wine, and a crocodile skin with wings falls out onto him. He kicks it, but is admonished by his superior, Father Anselm, for mistreating "the carcase of our patron saint". Father Anselm then proceeds to tell the one true story of the Dragon of Wantley, in which the dragon is revealed as a convenient fiction aiding the agendas of a number of people, not least the monks of Oyster-Le-Main. There's an edition, nicely illustrated by John Stewardson, at the Internet Archive (ID ofwantleyh00wistdragonrich).

Coming up to date, The Dragon of Wantley looks to me an interesting choice for TADS, as the traditional fairytale-themed pantos have in my view become very stale. Who even knows what, if any, the plot of Mother Goose is? The Norman Robbins version is itself a modernisation of a Victorian pantomime by EL Blanchard, whose sumptuous Dragon of Wantley; or, Harlequin and Old Mother Shipton was staged in Christmas 1870 at the Drury Lane Theatre, London, though it also draws on older incarnations of the story. The character names Mauxalinda and Gubbins, for instance, come from Henry Carey's 1737 burlesque. I've seen the playscript, and the author's intro says:

The Dragon of Wantley is another of those huge, spectacular pantomimes so beloved by Victorian audiences, yet in the 21st century, is totally forgotten by all but historians ... Modern audiences, however, would have found much to mystify them had I simply updated Blanchard’s masterpiece. Pantomime in Victorian times was a far different animal and its humour stemmed from very different sources. In writing my version of this story (based on an English legend involving real people), I have discarded the great spectacular scenes that were used merely to dazzle and amaze, and concentrated on the comedy. Some ofthe character names are those used by Carey and Blanchard, but the rest are my own invention.
- Norman Robbins, The Dragon of Wantley

Non-literary footnote. It's tempting to wonder if TADS' choice of anti-capitalist panto is self-referential, in the light of its dispute earlier this year concerning the lucrative Saturday Morning Market's earlier refusal to downsize by a few stalls to allow sets to stay in place for Saturday matinee performances. See the Exeter Express & Echo: Echo helps drama group to win stay of execution (Feb 5, 2011) and Committee denies pantomime claims (Feb 9, 2011).