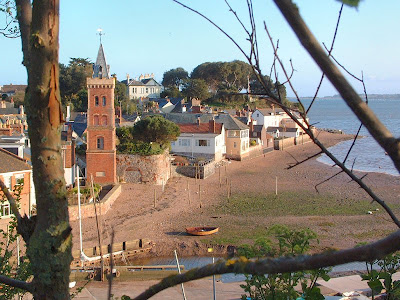 WW raises a couple of verbal questions. One is where Phillpotts' now non-standard spelling of "dinghy" as "dinghey" fits into the scheme of things. The other is "But who the Hoogly?" (that is, what is the "Hoogly" in the 1895 Encyclopaedic Dictionary definition for "dinghy" as "A row-boat of the Hoogly, which probably gave the name to the little jolly-boat of the merchant service").

The second is pretty straightforward, knowing that "dinghy" is a loanword from the Indian subcontinent. "Hoogly" is evidently a variant transliteration for the Hooghly, a distributary of the Ganges in West Bengal, India.

The first is more involved. "Dinghy" had quite a few competing transliterations - the OED also has "dingy, dingee, dinghee, dingey" (see Hobson Jobson for more background on its origins). "Dinghey" seems to be uncommon enough to have escaped the attention of dictionaries; it is, however, in books and for unknown reasons, had a peak of usage from 1880 to 1930 (see Google Books Ngram Viewer - dinghey). But to put the whole bunch in context, from 1880 "dinghy" rapidly rose to become the dominant form, swamping the alternatives (see Ngram Viewer for dinghey, dinghi, dinghee, dingey, dinghy).

I couldn't directly include "dingy" in the stats because of the confusion with the adjective "dingy", but comparing "ship's dingy" and "ship's dinghy" shows that "dinghy" similarly dominates.

It's usually impossible to tell why one form goes bigtime compared to others. Sometimes use by an influential or official source helps things along; sometimes it could be argued that one spelling is more in tune with English orthography than others. Nowadays, anyway, "dinghy" has become the standard.

It's not actually knowable from published examples whether "dinghey" was Eden Phillpotts' preferred spelling, as spellings in books also reflect publishers' house style. Out of (obscure) interest, "dinghey" also appears in his 1916 Faith Tresilion, his 1925 Up hill, down dale, and his 1932 They could do no other; but it's spelt "dinghy" in his 1906 The sinews of war (co-written with Arnold Bennett), his 1913 The old time before them, his 1923 Black, white, and brindled, the 1934 Macmillan edition of his Redcliff, and his 1938 Portrait of a scoundrel.

Go figure, as they say.