It's been about ten months since I took up bayan, and I guess I've reached a stage of consolidation: hitting the long-term learning curve. Having got thoroughly comfortable with the instrument (no more arm and shoulder pains), now I'm spending a lot of time on building a repertoire - learning medleys as well as distinctive individual pieces - and various aspects of technique.

It's a strange sensation being at this level. For the first time in my life, I feel truly at home with an instrument; on holiday I missed playing it. But getting to the point of competency opens up a vast and terrifying prospect of what needs doing in order to go beyond just competent - especially as I know I'm not musically gifted. Music for me is just a facet of generalism.

Particular areas for work include developing left-hand technique (counterbass scales and chord work beyond the basic keynote-chord motif I was used to on my old non-counterbass piano accordion); right-hand chord shapes beyond the basic major and minor chords; general right-hand technique (things like how to play triplets); and non-keyboard skills such as bellows control. Lack of tuition, beyond what I can see on YouTube, carries a huge risk of getting into mistaken habits, so I'm ordering Friedrich Lips' The Art of Bayan Playing, a classic tutorial that's only fairly recently been translated into English.

One thing I can work on without needing any deep secret: confidence in public playing.  All there is to that is taking every opportunity to do it. On Sunday I played - two slots of three pieces - at the first of the new TOPJAM music sessions at Topsham Rugby Club (see Facebook). That went very well, though to a small audience who were perhaps as much wowed by the unfamiliarity of the instrument as by the playing of it!  And if rehearsals go to plan, I'm playing a double act (with Lily Neal on violin) at the A La Ronde Community Christmas Tree Festival in Exmouth on Saturday. 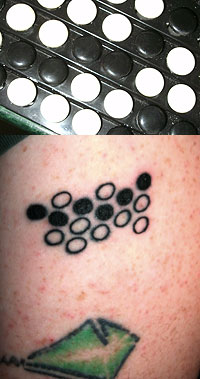 I copied this image across from my other blog. I had this upper-arm piece done in April, when I was already aware what a milestone experience learning the bayan was turning out to be. For those into such things and in the East Devon area, I highly recommend Glory Bound Tattoos, on Rolle Street in Exmouth. I'd had a couple of recommendations from others, and their work online looked good. The shop has a nice atmosphere and the staff were very friendly and efficient; they also didn't mind taking on a quite precise self-designed image that didn't offer much artistic scope (the dots are actually round when I'm not contorting to take a self-photo). Regular readers may recognise the older one below as a stylised Isle of Wight.