The roots of fiction

As with Cecil Torr's Small Talk at Wreyland, described by The Times as being about "first of all (though he did not know it) Cecil Torr", weblog topics tend to have a stream-of-consciousness relationship to their authors. So with today's topic of dentists in fiction, no prizes for guessing where I was today. I had a root canal treatment on a molar, which went fine except for a bad few hours after the anaesthetic wore off.

As it happens, Bill Ott and his Booklist column was there before me on October 15th 2000. It's reprinted on page 196 of The Back Page (Bill Ott, Joyce G. (FRW) Saricks, 2009).  Ott starts with a venerable example, the antihero of Frank Norris's 1899 McTeague, who once debarred comes to a bad end in Death Valley (see the Internet Archive ID mcteagueastorys00norrgoog), and continues with examples such as Rick Boyer's crime-solving Doc Adams; Captain Waldowski, the "Painless Pole" from Richard Hooker's MASH: A Novel About Three Army Doctors; Dr Marvin Bruce Fleckstein, the blackmailing dentist found murdered on the first page of Susan Isaacs' Compromising Positions; and "the evil Nazi dentist in The Boys from Brazil" (I think he may be confusing this with Laurence Olivier's role as Dr. Christian "Is it safe?" Szell in Marathon Man).

I can't much improve on this list at this instant, but there are some interesting-looking sources. On the general topic of dentists in fiction I'd like to read, for instance, the paper Dental questions in Frank Norris's novel "McTeague" ...

Frank Norris's McTeague, one of the first novels in which the main character is a dentist and dentistry is central to the plot, has been a minor member of the American literary canon for over a century. Possibly because Norris was such a committed and practicing realist/naturalist, his characterization of McTeague as a believable dentist has not until now been questioned. Nor has his use or misuse of the California Dental Licensure Legislation of 1885 to bring about McTeague's downfall been subjected to historical analysis. Such analysis may cast doubt on the credibility and reputation of the novel.
- L Scanlon, J Hist Dent. 2002 Mar;50(1):17-24.

... as well as the compendium Foley's footnotes: a treasury of dentistry (Gardner P. H. Foley, 1972) and Suzanne Poirier's paper Comedy or Cruelty: The Dentist as Portrayed in Literature and Art. Bull Hist Dent, 1987;35:1-7, which (as far as I can gather via Google Books snippet view) collects examples and analyses the negative portrayal of dentists in the arts, and offers the counterexample of "one of the few multi-dimensional dentists in fiction", the village dentist Russell Maude in Janet Frame's 1965 novel The Adaptable Man. 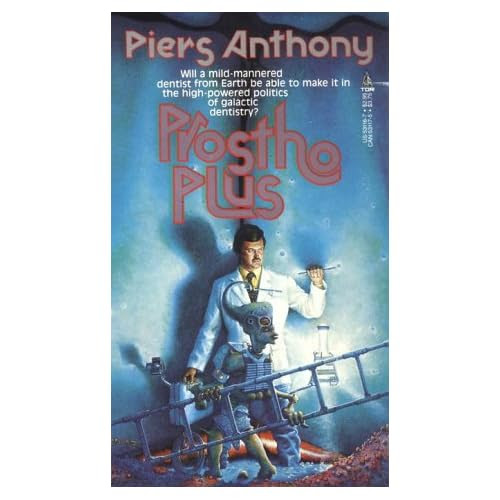 However, I can offer another positively-portrayed dentist: Dr Dillingham, the hero of Pier's Anthony's 1971 comedy SF novel Prostho Plus. Dillingham is a rather jaded Earth dentist who gets unusual visitors: aliens who require dental work for one of their number (they communicate by making cuneiform-like bite marks on plastic rods). Kidnapped by the aliens - the "Enens" - he finds himself as property on their world as an "exodontist".

The Enens farm him out to treat a prince, the child of the "high muck-a-muck" of the ocean world Gleep (the comic names are a translator artifact). This child turns out to be a giant whale-like creature whose dental cavity is so large that Dillingham has to excavate it from the inside. After the treatment, however, he finds himself a prisoner, sold to Gleep as a permanent dental maintainer living inside the Gleep prince, until his contract is purchased by the diplomat Trach, a vegetarian dinosaur. He acquires his freedom by saving Trach's career by curing his halitosis.

Dillingham continues to successfully treat patients, such as an "Electrolyte" who has become aphasic from gold inlays on conductive teeth; the latter, out of gratitude, sponsors him to attend the Galactic University of Dentistry. Here he is dismayed to be studying alongside creatures with immense technical advantages such as eidetic memory and specialist organs for dental work. On the night before an important test, he takes the time to fill the tooth of a tiresome, elderly oyster-like creature, during which procedure he has to fight off the latter's laser-wielding grandson. As a result he achieves only 3% on the test, and is further dismayed when the ethical decisions of his previous work are stringently criticised.

And I'll stop there. It's a good yarn, dentally authentic, and worth finding; inexpensive copies are easy enough to come by on Amazon.

Addendum: see Felix Grant's The Growlery - Prostho Plus - for further discussion on this.  We both managed to find copies, and are very much enjoying re-reading it. As I said to Felix, the dentistry details are deeply rooted, so to speak, in the dental technology of the time it was written.  Unrestrained SF exploration of the theme of dentistry would not be about the mercury amalgams and gold inlays that appear in Prostho Plus; it might be about tooth transplants and stem cell implantation of tooth buds to grow new teeth (even now it's outdated: my dentist puts some kind of optically-cured ivory-coloured plastic into cavities, not metal). On Earth, Dillingham has irritating patients, such as the woman who wants healthy teeth replaced because it's fashionable, and the old man who refuses proper treatment of his extensively-filled teeth in favour of "patching them up so they won't blow", and he finds exactly the same kinds of problem on alien worlds.  Prostho Plus is essentially an SF pastiche on the dentistry of the time it was written - but no less good for that.