The Old Lime-Kiln on the Lake Shore 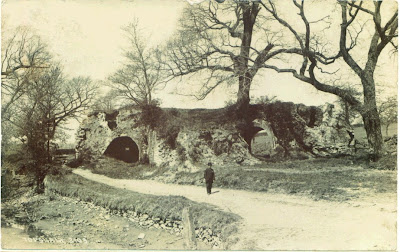 Further to last year's post Literary limekilns: Dr Sadru Bhanji kindly sent me a scan of the above postcard image, dated 1927, showing old limekilns near Topsham (at "Marsh, near Clyst St George"). It's in Dr Bhanji's collection, and probably my favourite image from the recently released Topsham: The Historic Port of Exeter.

It's such a classic ruin that I was interested to find if any trace still existed. It was obviously an unsafe structure, but I thought at least a tump might remain. But the 'closure' to this search proved surprisingly disappointing. The ruined kilns no longer exist; they're not on the 1933 Ordnance Survey map, and must have been demolished to clear space for the house that now stands at their former location (adjacent to the road from Topsham to the George and Dragon, directly opposite Darts Farm llama enclosure).

I found an unbelievably apt poem, The Old Lime-Kiln on the Lake Shore: July, 1881, from John Brayshaw Kaye's 1882 Songs of Lake Geneva: and other poems (this is Lake Geneva, Wisconsin, not the Swiss one). The poem recalls how a lakeside lime-kiln used to be the meeting place for swimming, fishing parties and boyhood high jinks - but years later, disused, it's just a ruin, and in time even that ruin will cease to exist. It's dripping with pathetic fallacy, personification and sentimentalism; as I mentioned in Literary limekilns, a working limekiln was a polluting and occasionally lethal presence on the landscape. Nevertheless the description is very like that in the photo above (not on a lake shore but by a sluice off the River Clyst) and the poem is still a strong evocation of transience. From the ending:

But things have changed since the " long ago,"
For the ever-moving tide of years
Has borne from thence in its ceaseless flow
All those who rowed to that night bird's cheers,
While sun and storm, growth and decay
Have all been busy in their way,
And ruin is tenant now, at will,
Of all that 's left of the old lime-kiln.

Now the the circling walls are fallen in,
And the grass grows green round the crumbling stone,
And the brave old oak that so long had been
The kiln's companion, is lying prone, —
As though it could not bear to stay
When its warm, old friend had passed away,
It has stretched itself along the hill
And died on the grave of the old lime-kiln.

The rude stone arch, too, has disappeared,
And in the front where the fireman stood,
A white-barked birch has sprung and reared
Its ghostly trunk, and two young oaks brood
In mournful silence close at hand,
And the three in full-leafed beauty stand,
to shade and mark and memorize still
The sunken tomb of the old lime-kiln.

A few more years and the well-known spot
Will not retain e'en a single trace
That it ever was, — it will be erased
By the ever-busy hand of time.
A few more years and the world will not,
Of all who once sported about its base,
Have kept for itself a single name
Or preserved one memory uneffaced,
But all will simply be forgot.
Unspoiled by praise, untouched by blame,
What lot could be truly more sublime?
But while they live, like a sweet, wild chime,
The memories of the past shall thrill
Their hearts when they muse of the old lime-kiln.

Google Maps view of the site of the old Marsh limekilns, Topsham. The kilns were adjacent to the main road where you can see the white vehicle, centre. The sluice running diagonally up toward the road is that at bottom left in the postcard image. The path where the man is standing in the postcard still exists; it's now the Route 2 cycle network path by the Topsham Bends @ Darts Farm Gateway.