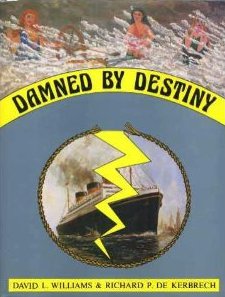 I was looking at the pile of books Lily was selecting for the new thematic window display at the Topsham Bookshop, and saw this.

Damned by Destiny (David Williams and Richard P. De Kerbrech, Teredo Books, 1982) is a fascinating and long out-of-print book about the surprisingly large number of major passenger liners (20,000 tonnes and up) that never made it to their intended purpose, or at least didn't last long in it:


A complete account of all the World's projects for larger passenger ships, which, for one reason or another, never entered service. Some were still-born, some met with disaster after launching, and some were diverted to other purposes during war. Potentially, some were the greatest liners ever conceived and would have surpassed the most famous, not only in speed and splendour, but in their very size and appearance. They were victims of circumstances.

Examples include the unfinished White Star Oceanic III; the SS Justicia (built as a replacement for the Lusitania, but immediately requisitioned as a troopship and torpedoed after a few trips); the Principessa Jolanda, that sank at launch; the Kashiwara Maru and Izumo Maru, that became the Imperial Japanese Navy aircraft carriers Jun'yō and Hiyō; the never-built President Washington and Cunard "Q3"; and many more.

This is a superb book, exhaustively researched and well-illustrated; if you're interested, it's currently (11th April) in the window of The Topsham Bookshop.

It's well-illustrated, that is, except for the odd piece of art on the cover. It obviously represents the Moirai, the classical Three Fates: Clotho at left spinning the thread of life, Atropos at centre cutting it, and Lachesis at right, as far as I can see just going "OMG". Presumably the implication is that the thread of life for these ships went straight from being woven to being snipped, without Lachesis getting a look-in to do the measuring; but the artistic execution is very naïve. It's uncredited, as far as I can see, and I wonder at the editorial processes that went into considering it an asset to the cover image.

The contemporary reviewer in Ships Monthly agrees with me:


Teredo Books are famous for their publications and this one does not let them down, except for the peculiar design of dust jacket which shows the three Fates, representing Destiny, and a shattered portrait of the White Star's third but never completed Oceanic. However, the rest of the book is splendid ...
- Ships Monthly, Volume 17, 1982

Teredo Books was, incidentally, a highly respected publisher of maritime titles founded by the sailor and author Alexander Anthony Hurst (1917-1999).