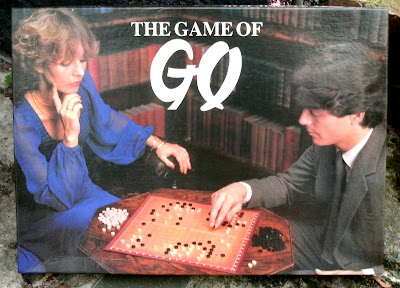 I was amused by this box image from the Michael Stanfield (MS) Go set. The makers haven't gone for the obvious Japanese-themed illustration, and have instead tried to portray a kind of 1960s middle-class sophistication. Full marks for the depiction of the man using the correct traditional stone placement method (between index and middle finger). But the game itself is a bit of a mystery: there are a lot of peculiar stone placings that don't further the game's aim, to surround territory, usually starting with the corners and then the edges. 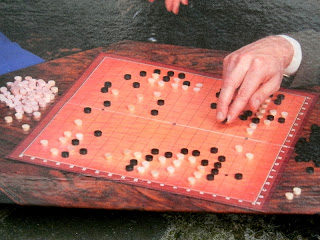 It is, however, vastly better as a portrayal of a Go game than the completely random board position in Kunyoshi's 1843 Raiko Tormented by the Ground Spider. Considering the general attention to detail, you'd think Kuniyoshi would have known better.


A real Go game tends to look like this at the end of the opening phase: 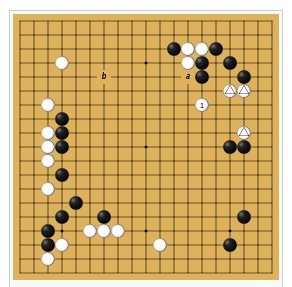 This is the Wikipedia image of Game 1 of the 2002 Korean LG Cup final between Choe Myeong-hun and Lee Sedol.