Athletes tend to be highly superstitious when it comes to anything that might improve performance. So they're a ready market for commercially-hyped scientifically-unproven talismans, which this Olympics manifested in the practive of sticking magic blue go-faster tape on themselves (see Olympians Showcase Superstition With Mysterious Kinesio Tape, Scientists Doubtful, Peter Murray August 12th, 2012).

Whatever the actual claims for this stuff may be, a number of news media sites have circulated this factoid about its claimed mode of operation:


... it separates the upper layer of the skin from muscle tissue. This extra space allows for muscles to fire and recover more quickly.

I don't know who originated this, but did no-one put brain into gear about this statement? The skin is anchored by the underlying 'superficial fascia' to the fibrous 'deep fascia' that sheaths the muscles. To separate these would involve major subcutaneous tearing of tissue, and I doubt that would do much for athletic performance ...

I was tickled by one commenter's ridicule of the idea - "you could turn round in your own skin" - as it reminded me of the ríastrad (battle frenzy) of the Celtic mythological hero Cúchulainn, as described in the prose epic Táin Bó Cúailnge (aka The Táin). Turning around in his own skin was just one of many weird physical transformations; Cieran Carson, one translator of The Táin, rendered "ríastrad" as "torque", but I much prefer Thomas Kinsella's term "warp spasm". One such description is:


"The first warp-spasm seized Cúchulainn, and made him into a monstrous thing, hideous and shapeless, unheard of. His shanks and his joints, every knuckle and angle and organ from head to foot, shook like a tree in the flood or a reed in the stream. His body made a furious twist inside his skin, so that his feet and shins switched to the rear and his heels and calves switched to the front… On his head the temple-sinews stretched to the nape of his neck, each mighty, immense, measureless knob as big as the head of a month-old child… he sucked one eye so deep into his head that a wild crane couldn't probe it onto his cheek out of the depths of his skull; the other eye fell out along his cheek. His mouth weirdly distorted: his cheek peeled back from his jaws until the gullet appeared, his lungs and his liver flapped in his mouth and throat, his lower jaw struck the upper a lion-killing blow, and fiery flakes large as a ram's fleece reached his mouth from his throat… The hair of his head twisted like the tange of a red thornbush stuck in a gap; if a royal apple tree with all its kingly fruit were shaken above him, scarce an apple would reach the ground but each would be spiked on a bristle of his hair as it stood up on his scalp with rage."

I first ran into the word, not realising its credentials, in the comic strip Sláine in the comic 2000 AD. Its barbarian hero Sláine is somewhere between Cúchulainn and Conan the Barbarian, and the series is a very ingenious adaptation of Celtic mythology as fantasy with SF elements. 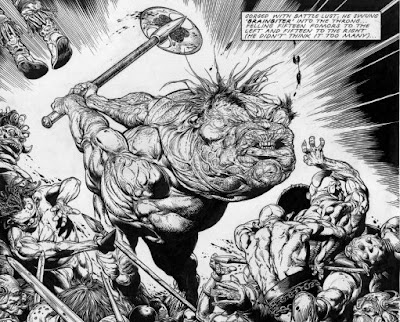