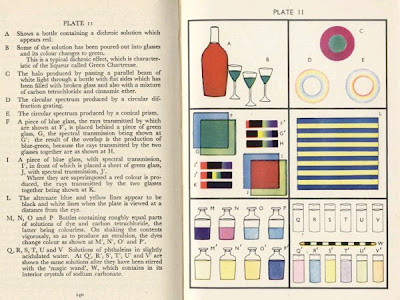 I love the way the Internet often brings to the surface dimly-remembered things. I remember from around 1970 coveting a very pretty book about optics in the school library. I can remember nothing about it except that it had interesting colour plates, and a reference to unusual colour properties of Green Chartreuse liqueur.

Google finally traced it: Colours and how we see them (Hamilton Hartridge, Bell & Sons, London, 1949). There are some scans at Chris Mullen's The Visual Telling of Stories website (which has a wealth of material on colour, and more) and one of the plates - shown above - illustrates the Chartreuse as red in the bottle, green in the glass. The actual book - a write-up of Hartridge's Royal Institution Christmas Lectures 1946-47 - looks readily findable, but I was more interested in having traced the detail I remembered, which refers to this optical phenomenon called dichroism (a material having different colours under different lighting conditions):


This change of colour with thickness of solution is known as the 'Chartreuse Effect', because it was first noticed in connection with the famous liqueur which was manufactured by the Carthusian monks. When in the flagon the liqueur is a deep ruby red; when poured out into the glass it is a brilliant emerald green. Nothing could be better than to actually use the liqueur itself for demonstration purposes, but this may not be easy.

It easn't easy, and is actually a bit of a mystery, because I'm familiar with Chartreuse liqueur (you can readily find images online) and I've never seen any sign of it displaying this red-green dichroic effect. It's green in both the bottle and glass.

Nor do there appear to be any references to this "Chartreuse effect" except in Hartridge and a handful of later optics books - such as Frederick W Clulow's 1972 Colour: its principles and their applications - that I'd bet money just recycled the factoid from Hartridge. Have the Carthusians changed the recipe since he wrote about it? Was he simply mistaken? Or could he even have invented the observation? I raise this option becase his 1976 obituary in the British Journal of Opthalmology mentions his work as:


"Director of the Vision Research Unit ... set up to give Hartridge a chance to test the polychromatic theory of colour vision which he had promulgated with few real experiments but many publications ... From this point of view, the venture was a predictable disaster"

So, can anyone shed any light on this claimed property of Chartreuse?

So we know what we're talking about, here's a household example: a Fairy detergent liquitab, whose content shows a very nice dichroism, from green by transmitted light, changing to deep blue by reflected light. 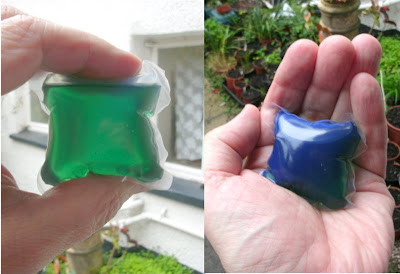 A more celebrated example is the Lycurgus Cup, a late Roman glass goblet which, due to the presence of colloidal gold and silver, is olive-green when viewed under normal circumstances by reflected light, but wine-red by transmitted light. See The Lycurgus Cup - A Roman Nanotechnology (Freestone, Meeks, Sax and Higgitt, Gold Bulletin, 4, 4, London, World Gold Council, 2007).

Addendum, 7th Oct 2013. A few days back, the quiz and general knowledge programme QI mentioned this effect. It featured an experiment, credited to Dr Alice Bowen, showing the creation of a cocktail comprising equal parts of the liqueur Blue Curaçao, clear cranberry juice, and lemonade. It displayed a strong red-blue dichroism. This'll probably be online soon.