View Babbacombe to Shaldon walk in a larger map

As I decided at the end of Teignmouth and Shaldon: revisit, yesterday I walked the 6-mile section of the South West Coast Path from Babbacombe to Shaldon. It's extremely handy for access from here: Torquay, Teignmouth and Topsham are all on the same direct train route. A promenade walk and quick bus ride at the Torquay end gets you to Babbacombe, and the ferry across the Teign connects Shaldon to Teignmouth. The forecast said warm but not intolerably so (20°C), with a bit of a breeze and some showers likely, so it looked just the day for it.

The walk starts along the clifftop promenade at Babbacombe Downs; on a clear day there's a fine view of the walk ahead, and right across Lyme Bay to Branscombe (as well as of the landslip and semi-demolished Ridgemont House - see An afternoon in Torquay #1). At the northern end, a small service road takes you to the upper depot of the Babbacombe Cliff Railway, and you join the South West Coast Path there.

Click to enlarge
A short section along suburban roads - via the Model Village, St Marychurch Road and Petitor Road - takes you to the Coast Path proper. An initial section by Torquay Golf Course leads to the first main segment of the walk, a winding (both horizontally and vertically) woodland path that passes the tops of two popular coves with red Permian cliffs, Watcombe and Maidencombe. It's lovely and (to me) very familar terrain typical of English south coast clifftop/landslip: a tumbling woodland of sycamore, elder, ferns, the odd Buddleia, and a lot else I don't recognise (Clare's better at botany, but she doesn't like the heat, and - it turned out sensibly - declined this walk). As the path rises, you get good views back to Babbacombe Beach and the headlands of the Torquay peninsula.

Click to enlarge
Shortly, you get a glimpse of Watcombe Head, the promontory above Watcombe Beach, before the path crosses the metalled road down to Watcombe Beach. The next ascent takes you over to the well-known 'Valley of Rocks'. This is a remarkable place, and one hard to do justice in photographs: a deep and wide glade with steep walls in places, and strange ivy-covered rock formations. On its northern side, the Coast Path follows a railed ascent - the Goat Path - to a viewpoint where you can see across the sea of treetops to a crag, Giant Rock, above the valley.

The Valley of Rocks interested me as a very odd landscape; I couldn't work out its origins, which vaguely recalled landslip, but didn't seem quite right. Googling when I got back revealed that it's in part down to quarrying of stone and terracotta. The Torquay Pottery website explains the detail - GP Allen's discovery in 1865 of terracotta in the grounds of the nearby Watcombe House, that led to a century of Watcombe Pottery (rather pleasant and distinctive work quite unlike the stereotypical knick-knacks you associate with seaside resorts). But, contrary to some accounts, the great majority of its striking terrain is natural, pre-dating any quarrying; Watcombe was one of the Devon locations regularly described as "sublime" (that is, beautiful but scary, within aesthetic classifications), and a popular venue for strolls and carriage drives; it was the venue for a couple of fêtes champêtre organised by the Torquay Choral Society (see the following post, Fêtes champêtre at Watcombe, for more on this).

You can find old prints and the occasional photo of the Valley of Rocks before the woodland cover obscured the view, and it looks amazing. (It seems quite a common phenomenon in southern England for change of land use, such as urbanisation or end of grazing, to bury scenic locations as has happened here - I've previously mentioned Pulpit Rock and Hadfield's Lookout in the Isle of Wight, and Sherbrook Chine near Budleigh).

From the viewpoint above the Valley of Rocks, the Coastal Path continues toward a second cove, Maidencombe. The woodland thins out, and there are two options - a higher route following the John Musgrave Heritage Trail, or the more strenuous Coast Path proper that skirts the cliff edge. Maidencombe Cove I didn't think much of: the huge display boasting of good water quality has a tiny disclaimer about this declining under certain conditions when there was urban runoff. It must have been such a day, because right next to the cafe steps there was a damp cascade with horsetails, that was giving off a strong smell of sewage. I got a quick ice cream and carried on toward the final stretch, which goes through the Labrador Bay RSPB Reserve.

Did I mention that it was hot? It had been distinctly close in the woodland section, but once out into the full sunshine, I become well aware that the forecast was well off the mark with 20°C. It must have been 25°C or more; there wen't many other walkers on this section, and most of them looked very uncomfortable. What had looked like a gentle home stroll rapidly turned into a succession of slow climbs - five paces, rest, five paces, rest - and descents, with Shaldon Ness getting no closer. On the third exhausting ascent up the side of a parched field, down to my last inch of tepid water and starting to get thigh cramps, I had a strong twinge of worry as it occurred to me that it's perfectly possible to get heat stroke even on an English coast walk only half a mile from the main road. Fortunately I spotted a sheep trough with a ball-valve inlet that dispensed clean-looking water. I didn't risk drinking it, but I filled my empty water bottles and doused it over myself at intervals. It was a relief to come over the final rise and see Shaldon Approach Golf Course, the Ness and Teignmouth below, and the J2O with ice at the Ness hotel was bliss.

Click to enlarge
The official South West Coast Path site is inconsistent on the matter of this section, which took me about 4.5 hours. One page calls the Babbacombe to Exmouth walk as "easy", though with "tiring ascents and descents" between between Torquay and Shaldon;  another calls the Labrador Bay section "challenging". I'd call it challenging, especially at 25°C. It wasn't as difficult as the Lyme Regis Undercliff or the Beer to Sidmouth sections, but it's still hard work for the occasional walker. A very interesting section of the coast, though. 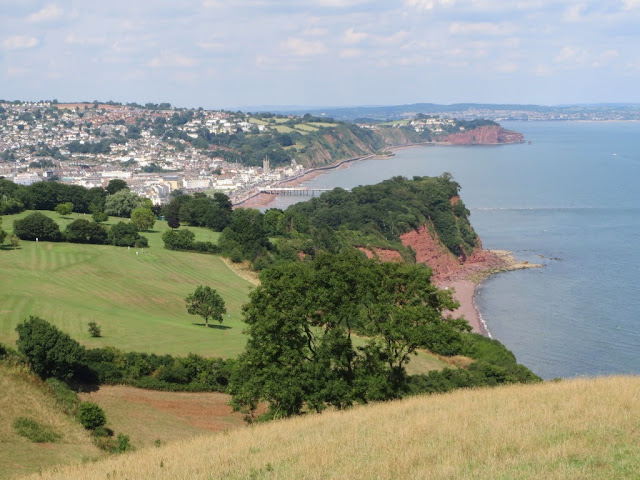