If you've visited Osborne House on foot and are going back to Newport, it makes a pleasant round trip to take the five-minute bus trip to East Cowes, take the chain ferry - the Cowes Floating Bridge - across the mouth of the Medina to Cowes, and get the return bus from there. 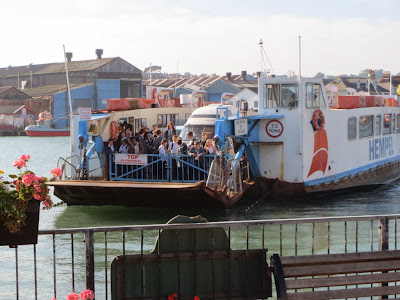 The Floating Bridge has been running in various incarnations since 1859: see historical postcards. It's currently free for pedestrians, and the curving cabins have an interesting selection of local history displays, as well as poetry and artwork. 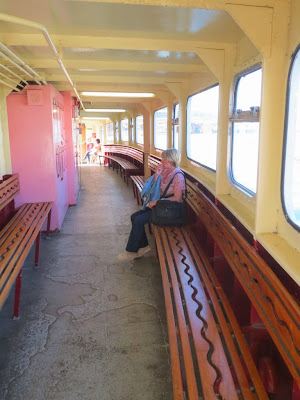 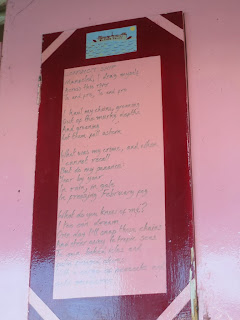 I quite liked this self-referential poem:

Manacled, I drag myself
Across this river
To and fro, To and fro

I haul my chains, groaning
Out of the murky depths
And groaning
Let them fall astern

What was my crime, and when
I cannot recall
But I do my penances
Year by year
In rain, in gale
In freezing February fog

What do you know of me?
I too can dream
One day I'll snap these chains
And steer away to tropic seas
To sun baked isle and
palm fringed shores
With a cargo of peacocks and
gold moidores. 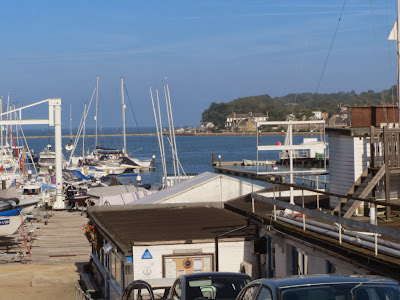 We always seem to be paying flying visits to Cowes. On first glance, it doesn't have much: one folksy pedestrian main street, sandwiched between a very busy port on the Medina, and a lot of fairly uniform residental development on the hillside above. But a quick glance at the map suggests it would repay a bit of exploration: next time, maybe.

Come to think of it, we've not explored any of the north side of the Isle of Wight. While it looks rather nice, if a little gentler than the Cretaceous cliff terrain of the south, the problem is that coast access isn't as comprehensive as the south; the northern coast is either interminable flat esplanade, complicated estuary, or on private woodland. From East Cowes south-eastward, there's no public access to the coast round the wooded Osborne Bay - coastline on the Norris, Osborne and Barton estates - and this section of the official Coastal Path has to bypass the coast in favour of a dismal trudge along the main A3021 road inland.

The Marine and Coastal Access Act 2009 introduced right-of-access legislation for the English coast: but this act doesn't include islands, unless they're accessible by foot from the mainland, or get a special order given by the Secretary of State on the basis that the coastline is long enough to justify such a path. Last year, the Isle of Wight Ramblers association launched a campaign to develop a coastal trail ...


Isle of Wight Ramblers say that around half of the existing path on the Isle of Wight runs either inland or along public roads and that “more than ten miles of our northern coastline between Yarmouth and Ryde have no public access or footpath”.
- Isle of Wight Economy Missing Out On £35m Say Ramblers, On the Wight, 7th April 2012

... and the Secretary of State made a consultation in preamble to such an order. However, despite support from the majority of respondents, the environment minister Richard Benyon decided not to make such an order on the grounds that the Isle of Wight "is not a priority for the coastal access programme". See CampaignerKate - Wight blacked out - for a summary of the story; Coastal access: order for the Isle of Wight under the Marine and Coastal Access Act 2009 for the full report; and the report and analysis from Isle of Wight Ramblers. It seems some voices carried more weight than others, and I've no doubt English Heritage was among them.

Update,  3rd Oct 2013: On The Wight reports that "the Minister has decided to review his decision to exclude the Isle of Wight from the English Coastal Path" - see A ray of hope for Isle of Wight Coastal Path plans. 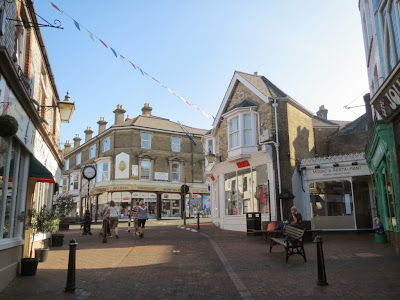 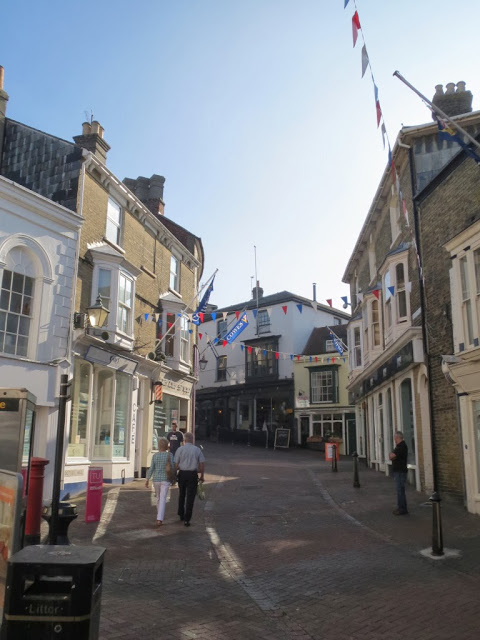 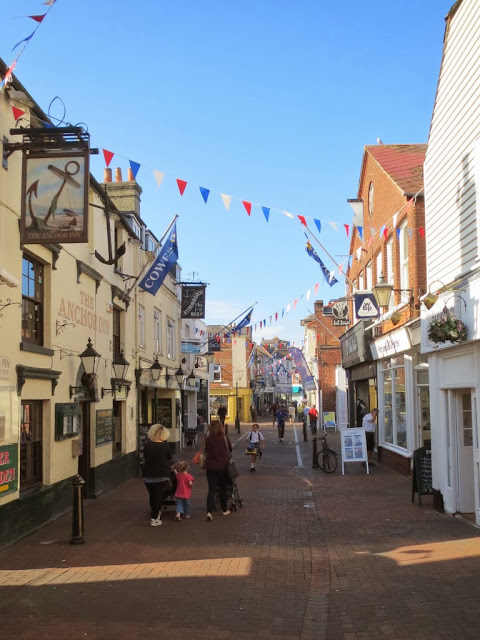 The name Cowes is historically quite recent. It may derive ultimately from a descriptive name of sandbanks at the river mouth, but solidified after Henry VIII established a pair of forts - "cowes" or "cowforts" - on the west and east side. Prior to this, the settlements were called East and West Shamblord (aka Shamelhorde / Shamlord / Shamblers). According to an article in Nomina Germanica, Arkiv för Germansk Namnforskning, Volume 6, 1940, this name derived from "Old English sceamol 'bench, stool' and ord 'point'"; it's preserved now only as "Shamblers Copse", a wood to the south of (West) Cowes.