Emily at the excellent Ephemeral Curios, which largely focuses on biological curios, just commented in response to Mysterious superfruit #2 with another good example of advertising using weird biological images completely unrelated to the product advertised:

Possibly even weirder are these ads for a "weird food" that "kills blood pressure." It's a Glaucus nudibranch! I think they're actually toxic.

Actually, these advertisers don't seem to be very picky about what marine organism they use. A quick Google image search for "weird food" "blood pressure" finds these.

Google images of it: "Glaucus atlanticus".  It's an absolutely amazing little creature.


This one is just some species of squid.
This one you're unlikely to find; it's a well-circulated image of a mutant nine-tentacled octopus that "was spotted at the Marusan Seafood Shop in Marugame, Japan (Kagawa prefecture) on October 26, one day after it was caught in the Seto Inland Sea. Masa Koita, the 60-year-old shop manager, noticed the abnormal Common Octopus (Octopus vulgaris) after he had boiled it in preparation for market." 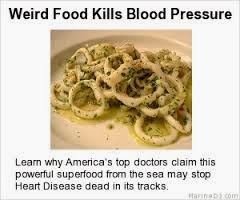 This one is just calamari salad (Insalata di calamari) from the Angela's Italian Organic Oregano website. 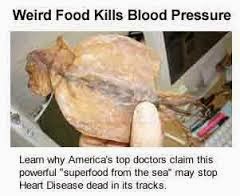 This one is amiyaki surume: a Japanese seasons and dried squid snack. The image appears to have been ripped off from the Snack Attack blog. 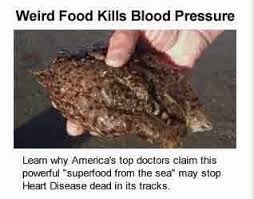 This one is a California sea hare (Aplysia californica). The image comes from the Gray Whales of San Ignacio Lagoon weblog (text by Tom O’Brien, photos by Karen Capp).

Edit: Dan Schwab of Keytoons explains at Weird Food (for yout heart!). There is a partial pertinence, in that the ads are for a new supplement in vogue, partially based on calamari oil; that at least explains the squid.