"The Baby was an anachronism" 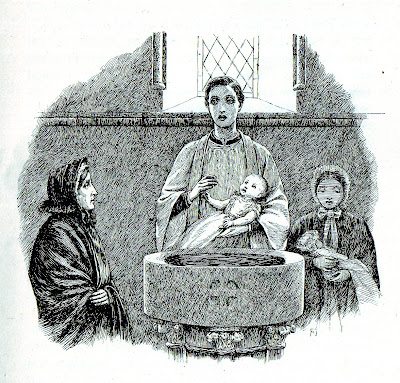 Mirrored from A Wren-Like Note, as potentially of geeky interest:

A while back I mentioned the versatile and prolific Scottish writer Andrew Lang - see Andrew Lang: a sampler - and in particular his 1890 Old Friends: Essays in Epistolary Parody (Internet Archive ID oldfriendsessay00langgoog) which imagines correspondence between various literary characters.

In the light of the current MG project, I re-read "From Mr. Paul Rondelet to the Very Rev Dean Maitland" (see pages 121-125). Dean Maitland we know from The Silence of Dean Maitland: the cleric who gets a young woman pregnant and accidentally kills her father in a fight, his guilt only revealed a couple of decades later. Paul Rondelet is a major character in a distinctly forgotten novel, the social satire The Monks of Thelema (Walter Besant and James Rice, Chatto & Windus,1878, Internet Archive monksthelemaano00ricegoog). Lang has Rondelet - an aesthete turned hack journalist, and apparently based on Walter Pater - escape his responsibilities by doing a runner to a Pacific island, and his letter advises the disgraced Maitland to do the same.

The bit that intrigued me was this footnoted sentence:


[Rondelet writes to Maitland] "And, in your time, no doubt you have loved?" 1

1 Alas, not wisely! But any careful reader of "The Silence of Dean Maitland" will see that the Baby was an anachronism. —Ed.

Lang is presumably referring to some problem with the chronology of the conception and birth of Alma Lee's baby by Cyril Maitland, and I thought I'd check this out. It wasn't wildly difficult, but nevertheless takes close reading; Maxwell Gray is an author prone to subliminal chronologies that take some piecing together from details chapters apart.

The novel starts with Alma Lee hitching a wagon ride to Malbourne on an autumn day. We know it's autumn by the cold weather and the clematis being in seed:


the high tangled hedges, draped with great curtains of traveller's joy, now a mass of the silvery seed-feathers which the country children call "old man's beard"

On this day, Cyril Maitland first meets Alma Lee in Malbourne - they're mutually attracted (in his case, despite his engagement to another woman) - and offers to escort her home from his sister's regular Bible class. Then:

Maitland (after some months away) returns to Malbourne, where the general gossip is that Alma Lee is now pregnant. It's a few days before the New Year, and another character thinks:

We're then told the chronology of Maitland's temporary break-up with his fiancée Marion in that year.


Cyril wrote back to release her from an engagement which he said he perceived had become distasteful to her ... This was in March. At Whitsuntide, Everard spent some time at Malbourne, whence Cyril went to Belminster for ordination at Trinity ... and got himself placed on a mission staff in the East of London, where he led a semi-monastic life in a house with his fellow-curates ...

On New Year's Day (referred  to as that of "sixty-three"), Alma gives birth to a son.

So this connects up to place Alma's first meeting with Maitland as autumn 1861; Maitland's split with his fiancée as March 1862; his leaving Malbourne as Whitsun 1862 (Google finds this to be June 8th); and the birth as January 1st 1863. Thus, given a normal 40ish weeks pregnancy, this timeline easily accommodates Alma's son being conceived in early April 1862. Unless I've missed something, the baby doesn't seem to be an anachronism; I'll probably never know what precisely Lang meant.