The Barn and other butterfly buildings 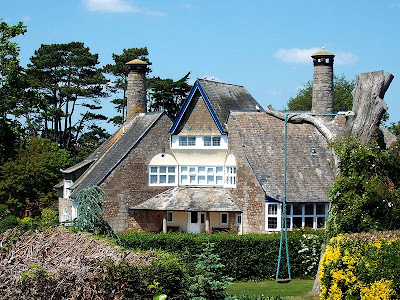 If you happen to be taking the upper footpath from Orcombe Point toward Exmouth, the one above Marine Drive (aka Queen's Drive), take a peek over the hedge as you descend Foxholes Hill, and you'll see an unusual and significant building. The Barn, which dates from 1896, is acclaimed as a masterwork of the architect Edward Schroeder Prior, who was a prime mover of the Arts and Crafts Movement of the late 1800s and early 1900s.

Originating as a reaction to Victorian revival styles and mass-produced design, Arts and Crafts design produced some monstrosities - part of its legacy, for instance, includes stereotypical pseudo-rustic garden fixtures such as crazy paving and fake wishing-wells. But it also produced stylish and innovative buildings, of which The Barn was one; using a striking "butterfly" design, its wings provided an imposing entrance on the landward side, and enclosed the seaward-facing terrace to make a sheltered sun-trap.

The Barn was so radical that it inspired Hermann Muthesius, the subsequent promoter of Arts and Crafts ideas in Germany; its influence on the design of his 1907-1908 Haus Freudenberg in Berlin is very obvious. Another Arts and Crafts house, Happisburgh Manor in Norfolk, also notably resembles The Barn, although its architect Detmar Jellings Blow said its design was not influenced by it, but came from "my friend Mr Ernest Gimson, who sent me the little butterfly device on a postcard". 1 Lutyens' Papillon Hall, now demolished, used a similar ground plan. 1 Prior himself went on to develop the concept further: probably the most ambitious example was Voewood (later renamed Home Place).

For more background about The Barn, see Not Brutal but Savage at the Continuity in Architecture blog. As well as links to a nice Flickr photoset, it has a picture from Muthesius' book Das Englische Haus in its original thatched form as built for Major Harry Weatherall. After a fire in 1905, it was rebuilt with a gabled front and tiled roof. The Barn is now a hotel; its website's Architecture page has a short history, including floor plans.