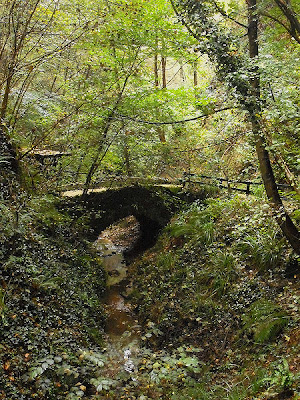 Clare and I just went to the Isle of Wight for a few days, and we highly recommend Shanklin Chine. This deep wooded ravine that cuts down through coastal cliffs at Shanklin is a nice example of a landscape feature discreetly managed to be a visitor attraction while maintaining its unusual flora and fauna (we'd never seen red squirrels before). See the official website for more background, which mentions rather darker aspects in its history: it was used for training commandos for the 1942 Dieppe Raid, and was also the outlet for the first Operation Pluto fuel pipelines. 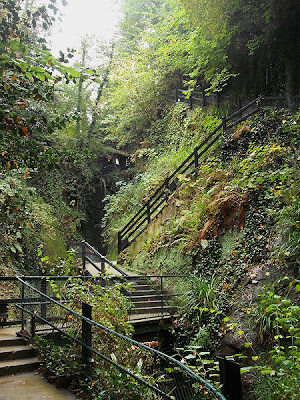 The Chine isn't an entirely natural feature. As this Isle of Wight Beacon feature, Shanklin Chine 2006: A Tale of Life Over 400 Million Years, tells, it offered only "perilous access" until the longshoreman William Colenutt excavated an easier path and opened the Chine commercially in 1817 (a smart move, capitalising on the increased popularity of the English south coast as a resort due to political instability on the Continent). You can see, for example, that the precipice over which the waterfall drops at the upper end is bricked, and capped with a stone to stop further erosion at the knickpoint. Looking at old postcards and the prints from George Brannon's 1820s Isle of Wight guidebooks, you can see the chine's appearance hasn't changed much over two centuries, during which time it has constantly charmed visitors since Keats wrote to Fanny Brawne in 1819:


The wondrous Chine here is a very great Lion; I wish I had as many guineas as there have been spyglasses in it.

Apart from many enthusiastic entries in guidebooks, topographical accounts and memoirs - some double-edged, such as Charles Godfrey-Faussett's description "awesomely twee" - the Chine has inspired a deal of literature. It makes an appearance as a location in, for instance, in SC Hall's 1837 Uncle Horace: a novel, Volume 2; Jacob Abbott's 1867 Grimkie; in Blanche Roosevelt's 1883 novel Marked "In haste." A story of to-day; as the scene of a Struwwelpeter-themed serial murder in MJ Trow's 1985 The Adventures of Inspector Lestrade; and in Jill Dawson's 2002 Fred and Edie: a novel.

It has inspired poems too, of varying seriousness (and quality): see "On Shanklin" in the 1794 Anthologia hibernica: or Monthly collections of science, belles-lettres, and history ..., Volume 3; "Shanklin Chine" in Sporting Magazine, 1806; Thomas Frederick Ball's 1865 "Shanklin Chine"; Canto VI / LXXVI onward of Edmund Peel's 1851 The fair island: a poem, in six cantos; "Shanklin Chine" in Albert Midlane's 1860 The Vecta Garland, and Isle of Wight Souvenir; consisting of original poems on the scenery and beauty of the Isle of Wight; and the anonymous "The Holiday of the Hardworked". Most of the poems on the topic are fairly conventional reactions to the picturesque, but Mimi Khalvati's "The Chine" is very different. The title poem of her collection The Chine (Carcanet, 2002), it uses the Chine as a metaphor for the rift between the remembered past and the present - rather like "the mechanism" in William Gibson's Agrippa. Although born in Tehran, Khalvati was brought up in Shanklin, and the poem powerfully evokes the experience of "walking in both worlds" on returning to a place known in childhood (exactly the circumstances of my own recent visit).

To be back on the island is to be
cast adrift but always facing the same
mother who stays ashore, is always there
despite the mist. My balcony’s a crib.
Through its bars the waves rush in. Not a ship,
not a gull, and the sky in its slow revolve
winding the Isle of Wight with a giant key.

We are spinning backwards in a slow spin;
we are in a time warp, a gap, a yawn,
a chine that cleaves the mind in two, a line
on the land’s belly. Shanklin. Rhylstone Gardens
where an old man rolls tobacco, as spare
with the strands as the years have been with him.
Luccombe with its own chine, barely a stream.

Every childhood has its chine, upper world
and lower. Time itself seems vertical
and its name too implies both bank and stream.
To be back on the island is to walk
in both worlds at the same time, looking down
on talus, horsehair fern notched through the Ice Age,
Stone Age, Bronze Age and still here at our heels;

Every path brings us back to the beginning.
Shanklin Chine is closed for the winter, both ends
barred with notices. But the mind is not.
Or memory. And time is spinning backwards
with the mainland out of sight and the great plain
where herds roamed the floor of the English Channel
and were drowned by it flush again with valleys.

I look down on them, my own that were fed
by chines, from the long esplanade of light
on Keats Green and seem to remember walking
with my mother here, running my hand on railings.
The beautiful inn on the corner’s a wreck
and there, at the bend, where the light’s so bright
and people walking down the steep incline

PS I didn't realise until I just read it that "Shanklin" actually derives from the old name of the Chine, the onomatopoeic "Chynklyng Chyne". See Vocabulary of English Place Names. 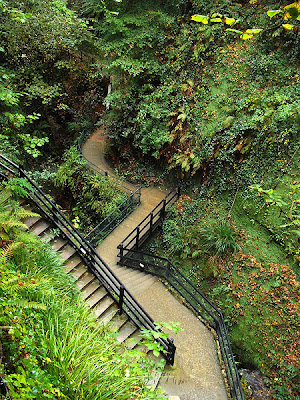 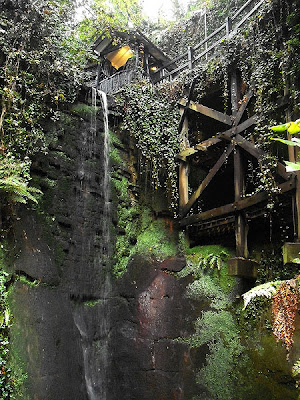