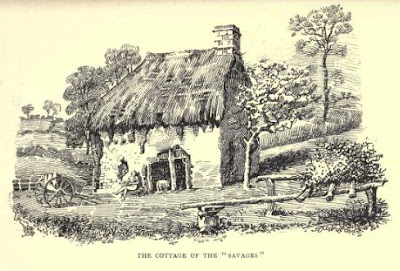 Click to enlarge: the Savages' cottage, from S Baring-Gould's An Old English Home and Its Dependencies. Note the naked figure outside; one of many slurs about the "savages".

We tend to think tabloid smears a modern fixture, but not so; I've just been reading a fascinating paper, "The True Story of the North Devon Savages" by Peter Christie 1, in Volume 124 of The Devonshire Association Reports and Transactions (it's sufficiently interesting that I cross-posted it from the Devon History Society).

The story starts with a piece in The Times (page 9, November 17, 1869) headed "Heathenism in Devonshire". Leading from a report about the conviction of two men for trespass in pursuit of game, it goes on to give a highly hostile report of an unnamed farming family living in rough circumstances in and around a tumbledown farmhouse in the parish of Nymet Rowland. The piece says of them:

To the clergyman of the parish and the neighbourhood they behave in a most shameful manner. They sing obscene songs when the reverend gentleman passes, they perform the most disgusting and nameless acts when he is in the company of ladies and those who are noxious to them they pelt with stones and mud as they go by their wretched domicile. Depredations in the neighbourhood are frequent. Gates and gate-posts and other objects of utility often disappear and threats of violence are common. We may add that members of the family have several times been convicted of offences. And yet these people continue their savage habits to the annoyance and disgust of the neighbours, treating the remonstrances of the clergyman with mockery, ribaldry and obscenity and setting the rules of civilised life at defiance.


The story snowballed, and the family - the Cheritons - gained national notoriety as "the North Devon Savages". The Daily Telegraph did a widely-reprinted special on them in October 1871: A Family of Savages in Devonshire. James Greenwood's 1874 In Strange Company: Being the Experiences of a Roving Correspondent gave a detailed account of them (reprinted here) which adds further sensational detail of them going near-naked and overtly suggests their children to be the product of incest because no men outside the family ever associated with the Cheritons. Greenwood had visited various low-lifes and criminals, but awarded the Cheritons pride of place: "Strangest of all strange company was that which, in my journalistic peregrinations, it was my lot to fall in with in North Devon". Reaction grew more and more rabid as the story spread, until you'd think commenters were talking about Sawney Bean. For instance:


Such, adds the Daily Telegraph, are the leading facts accumulated by our Commissioner, literally at the risk of his life.
...
Now that his work has been so successfully achieved it behoves us to ask two very plain questions. First, is or is not the existence of this abominable Cheriton family a disgrace and scandal to civilisation in general and North Devon in particular? Second, is it or is it not possible to devise some legal means for abating the hideous nuisance?
...
Are they to be allowed to reek and fester in their den, defying the laws of God and man? Cannot the law force them to adopt the habits of human beings?
...
Can or cannot certain offences be brought home to the Cheriton tribe? Have the births of their children been duly registered? Have they complied with the requirements of the Vaccination Act? Cannot their den be overhauled under the provisions of the Nuisances Removal Act? Does not the conduct, these forty years past, of the elder Cheriton, warrant the assumption that he is insane, and might not a Commission de lunatico be advantageously held to investigate the matter? There is no need to strain the law; but in a case so revolting and so flagitious, it is surely expedient to ascertain what its provisions are, and then to put them in force with the view of suppressing a scandal which would not be tolerated in any other civilised country in the world.
...
The Cheriton family in Africa would be bad enough; in an English village and under the lee of a Christian church, these creatues become simply unbearable.
- The North Devon Savages, The Leeds Mercury, October 24, 1871

These stories were further fuelled by letters, such as that in the Morning News accusing their women (inconsistently with Greenwood's story) of corrupting local farmer's boys "to which fact medical men in the neighbourhood can bear revolting testimony". Their notoriety even reached the pages of the New York Times: see A Tribe of English Savages, November 11, 1871, which further exemplifies the hand-wringing they evoked:


Many of the more revolting details of this bestial tribe we have ventured only to indicate. Their existence in one of the most fertile and populous districts of one of the most enlightened countries on the globe, is not a reassuring commentary on modern civilization.

Peter Christie's paper takes a fresh look at the subject, and finds a rather different story, one actually raised at the time. The Cheritons did have defenders, particularly the Reverend TJ Leslie from Appledore, who wrote several letters to the North Devon Journal pointing out that many of the anonymous accusations were libellous and that the Cheritons did attend religious services, and particularly arguing the possibility that rich farmers who wanted the Cheritons out of the parish could easily entertain journalists who wanted to 'interview' a poor family.

Christie's research rather bears this out: documented court cases show the Cheritons' crimes were small, but of the kind such as poaching about which landowners were particularly neurotic. He also notes that many of the cases were dismissed. Furthermore, land records of the period do show a consolidation of land ownership around Nymet Rowland into fewer and fewer hands. Ultimately the story may come down to a land feud in which the underclass Cheritons were less able to play the media than their rich and well-connected opponents. As the abstract to the paper summarises:


The 'North Devon Savages' were a notorious family living in the small parish of Nymet Rowland in the nineteenth century whose story has entered the realms of folklore. This study explores the truth behind their reputation and suggests that their notoriety, though based to some extent on fact, was deliberately exagggerated by local landed interests in order to force them off their land.

The Heard Family History website page A Criminal Past has two pictures of the Cheritons' house taken around 1860 by the photographer William Hector. The artist F. Bligh Bond's impression in Sabine Baring-Gould's 1898 An old English home and its dependencies matches one quite closely, and may be based on it. By Baring-Gould's time, the Cheritons were receding from history into folklore; Sarah Hewett's Nummits and crummits: Devonshire customs, characteristics, and folk-lore has another account, which tells of the just deserts inflicted on a sight-seer who went to gawp at them:


Many inquisitive persons went to Nymet Rowland to get a peep at the "Savages." One man, more curious than the general public, approached too near the house, and was at once pounced upon by a couple of Amazons, who demanded a reason for his visit. " Ladies," said he "I have lost my way, will you be so good as to put me on the right road to Dartmoor ? " " Aw, ess, tü be sure, replied Miss Cheriton, " come theāse yer way an' I'll shaw'e.

She took him into the adjoining yard for the ostensible purpose of directing him, and the unsuspecting wayfarer, venturing too near the edge of the horse pond in following his guide, was suddenly thrust into the filthy liquid, as a " There, thicky's the way tü Dartymoor and be — tü you," fell on his ears.


1. Christie, Peter. 'The true story of the north Devon savages'. Devonshire Association Report and Transactions, 124 (1992), 59-85. ISSN 03097994. If you are a member of a licensed UK higher of further education institution, you can listen to a lecture based on his research about the Cheritons: see here at the British LibraryArchival Sound Recordings site.