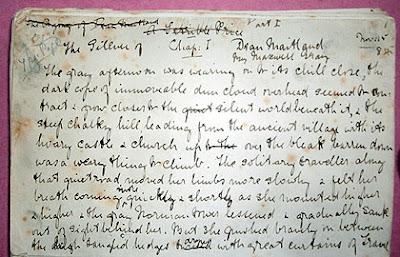 The gray afternoon was wearing on to its chill close; the dark cope of immovable dun cloud overhead seemed to contract and grow closer to the silent world beneath it, and the steep, chalky hill, leading from the ancient village, with its hoary castle and church, up over the bleak, barren down was a weary thing to climb.
- opening of The Silence of Dean Maitland, Maxwell Gray, 1886


Earlier this week we just visited the Isle of Wight again on a short holiday to see my family and get in a little scenery (more on this later). However, there was time to indulge in a bit of bibliographic geekiness: I was delighted to track down and examine the original manuscript of The Silence of Dean Maitland by Maxwell Gray: I knew that it had originally been deposited with Carisbrooke Castle Museum by the author's literary executor, but they had no knowledge of its whereabouts. I found it quite unexpectedly via a different location search at the Isle of Wight Records Office.

It's interesting in a number of ways. One of them is the generally relaxed attitude of publishers in the past about submission format: this document - much-corrected, handwritten not brilliantly legibly, single-spaced on notepaper - would be completely unacceptable nowadays. Another is the title revision history: A Terrible Price revised to The Agony of Dean Maitland re-revised to The Silence of Dean Maitland. Yet another was the associated correspondence in the box, which included a fairly excessive fan letter from the actor J Martin-Harvey, who said that while reading the latter part of the book he had been in a "continual state of hysterical excitement", with his "throat in a state of choking spasm". 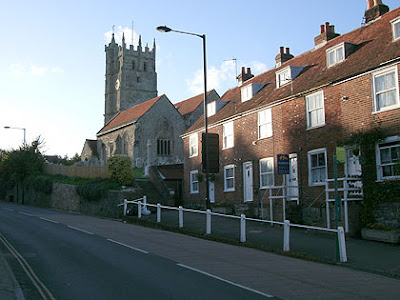 This is a fairly standard shot at the foot of the hill described in the book's opening - see Isle of Wight Postcards and the Isle of Wight Family History Society gallery. The location is High Street, Carisbrooke, and the village's fictional name in the novel, "Chalkburne", well reflects its nature.  The original settlement of the central Island, Carisbrooke is criss-crossed with forded streams, some seasonal, fed by water emerging from the chalk ridge that backs it.  The family of Maxwell Gray's mother, Elizabeth Trickett Gleed, lived at Priory Farm, not far behind the row of houses pictured. My great aunt lives in one near the bus-stop. Small world.

Update: for more shots of Carisbrooke, see A summer morning in Carisbrooke.