I've mentioned Undercliff areas a few times previously: southern English coastal terrains where landslips have created irregular clifftop terraces backed by further cliffs, creating local microclimates. The Lyme-Axmouth one is a remarkable wilderness - the nearest thing England has to a jungle. But the Isle of Wight one is, for the most part, rather gentler; it contains the villages of St Lawrence and Bonchurch, and the small town of Ventnor. Pretty and sheltered, yet easily accessible, it was a hit with the Victorians: a number of sanatoriums were established there, notably the the Royal National Hospital for Diseases of the Chest (now demolished, the site occupied by Ventnor Botanical Gardens). In the days when trains ran direct from Ryde to Ventnor 1, a non-stop service nicknamed 'The Invalid Express' reputedly made the journey in around 20 minutes. Nor did you have to be an invalid; a whole book could be written (and probably has been) on literary figures who lived there or used it as a retreat. For instance, Algernon Swinburne was brought up at Bonchurch; and Charles Dickens, Thomas Carlyle and Thomas Babington Macaulay stayed there regularly. Lesser-known authors included Pearl Craigie (see The writer, the cancer-merchant, his eccentric wife, and the faux castle) and Henry De Vere Stacpoole (see South Sea shenanigans). The Ventnor and District Local History Society has a longer list of famous residents and visitors.

But despite its picturesque villa-studded woodland, the Undercliff is still an active landslip zone, as evidenced by a number of case studies on coastal slip and erosion (see, for example, the Eurosion case study, this one on the Ventnor Undercliff Landslide Complex and this Isle of Wight Shoreline Management Plan report - the last leads with a very nice photo). Two sections are as untamed as the Dorset counterpart: that between Blackgang and Niton (where a whole chunk has become isolated by the destruction of the road - see Google Maps), and the Bonchurch landslip between Ventnor and Shanklin - see ditto). It could be described just in terms of geology, but there's something emotionally compelling about the area: Wendy K Harris, who has written a series of Undercliff novels, describes the fluid nature of the landscape as a metaphor for impermanence:


There’s something about The Undercliff of the Isle of Wight which expresses perfectly for me the impossibility of striving to hold onto anything in the physical world.

When I was a schoolgirl I assumed that geographical maps were accurate and permanent, but now I experience a landmass shifting its shape, adjusting itself to the forces of wind and water, re-contouring, spitting out dinosaur footprints like ancient messages from eroding cliffs, whilst simultaneously concealing more recent secrets waiting to be unearthed.

It's certainly a lesson in acceptance of the nature of all things physical. But also, sitting quietly, simply being here, the movement of life itself feels unquenchable and eternal.

I agree. A couple of years back, in The disappearing chine, I wrote something similar about the erosion of Blackgang Chine, "how this piece of landscape progressively fraying away is a very literal metaphor for the departure of the past into memory". 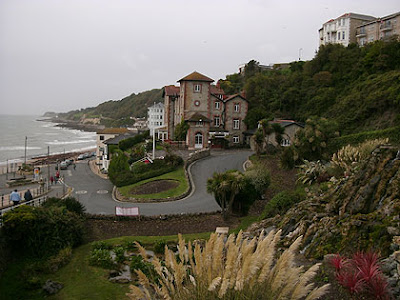 Anyhow, last week we walked one of the shorter Undercliff sections. We started at Ventnor (above - the IOW tourist board will probably shoot me for saying so, but I found it thoroughly depressing.  It was, however, a deeply overcast day, and off-season too, with the well-known Isle of Wight paddling pool drained for the winter). I was going to say hello to Ventnor Rare Books - I've bought a couple of Maxwell Gray books from them - but they were shut for lunch and we had limited time.

From Ventnor we walked along Wheelers Bay, a not terribly interesting coast with cliffs of chalk rubble fronted by a concrete sea wall with tetrapod defences. At Bonchurch, however, the scenery picks up; the path ascends to clifftop level, passing close to Bonchurch Old Church (this itself has a literary connection: Charles Hassard Wilcox, cousin and godson of Lewis Carroll, is buried in its churchyard - while his burial is mentioned in Carroll's diaries, the grave was only rediscovered in 1998 2). The path then runs through about a kilometre of occasionally strenuous ups and downs through the wooded landslip. One possible detour (or access route) is the scary gully called the Devil's Chimney.  Another, after the path leaves the landslip section and levels out, is down Luccombe Chine to Luccombe Beach, though last week it was inaccessible due to path repair work. After Luccombe, the main path joins the road down to Shanklin. You can either take it past the upper entrance to Shanklin Chine or take a flight of steps down to Shanklin Beach. All in all, it's a very nice walk if you want to experience the Undercliff and don't want to take all day.

Update: we revisited this area at the end of May 2012, and I've reported on it in more detail. See The Landslip - Bonchurch to Shanklin.

1. I just about remember this from childhood; the train went through a tunnel under St Boniface Down and emerged in a quarry (see Disused Stations). The tunnel has been kept open to carry Ventnor's water supply and other cabling. There have been a number of proposals to reopen the line.
2. See Bandersnatch, 1998. Wilcox was dying of tuberculosis, and Carroll wrote The Hunting of the Snark while sharing with other relatives the task of nursing him. Like many TB sufferers, Wilcox came to Ventnor in the hope of improvement, but died there on November 10th 1874, aged 22.
- Ray
at 11:54