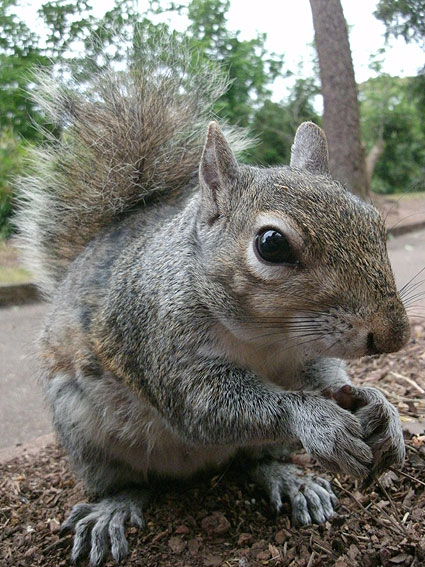 ... or at least the best I've ever managed to take. Clare and I regularly take a detour from shopping in Exmouth to feed the squirrels on Bath Road, the wooded parkland at the foot of the cliffs under the Beacon (see Google Maps). No special camera - just my inexpensive GE compact - but I managed to distract the squirrel with enough peanuts to get it in macro range.

I never get tired of Bath Road, with its restful sheltered parallel footpaths; it's one of the pleasanter parts of Exmouth seafront. William John Wesley Webb's 1872 Memorials of Exmouth mentions that the plantations and public walks on and under the Beacon are down to Exmouth's major benefactors, Lord and Lady Rolle.

The road name is a historical fossil from the late 1800s, when it led to a seafront bath-house owned and run by Thomas Burridge and Thomas Burridge Jnr. (according to the Rootsweb listings, the father was a master builder, the son a builder and the manager of a water company). Bradshaw's Shilling Handbook says the establishment provided both hot and cold baths. The building is now a pub, The Bath House (formerly called the Deer Leap). I can't immediately find much about its history, beyond it having been extensively developed; according to the pub-explorer entry:

One of the only original features remaining are two pillars behind the bar which formed the original doorway of the first building. Also, unseen underneath the Ladies and Gents toilets, are parts of the flooring and tiles from the baths.