Despite the relative smallness of the Isle of Wight, the south-western coast - the "Back of the Wight" - retains quite a degree of isolation. The coastal A3055 (aka Military Road) has no regular bus service, and there are no shoreline villages because the sandstone plateau between the chalk downs and the sea ends abruptly at a crumbly 150-foot cliff. From the shape of trees and bushes you can see how windswept it can be - the coast has a long history of shipwrecks - but last Friday was clear and sunny with a light onshore breeze, and Clare and I managed to get sunburnt as we rambled from Chale Green down the lanes via the hamlet of Pyle to the coast, then along the coast path to Chale and Blackgang (see Google Maps). 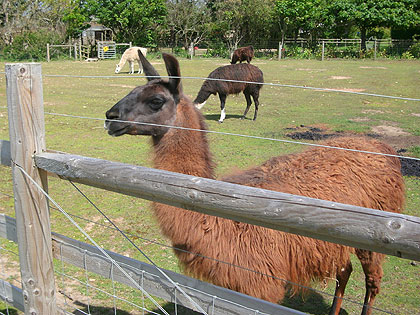 Where the lane from Pyle meets the Military Road, we were pleased to make the acquaintance of Bruce (above) and his colleagues Manuel, Ebenezar, Kipper and Spotty, who all work for Wight Llama Treks. From there, it was a short walk to the coastal path.  Due to a nicety of geology, coastal erosion rates and stream flow, this section of cliff is cut by a succession of chines, sharply-incised miniature ravines.


Most of them, such as the above New Chine, are quite small, but Whale Chine is the most spectacular: a deep vertical slice that cuts almost to sea level down through the clifftop farmland. 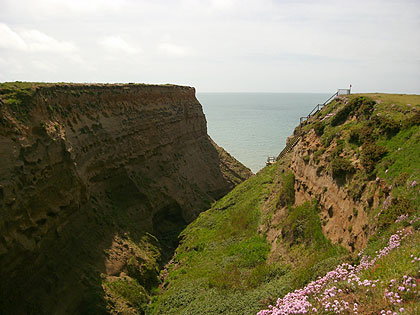 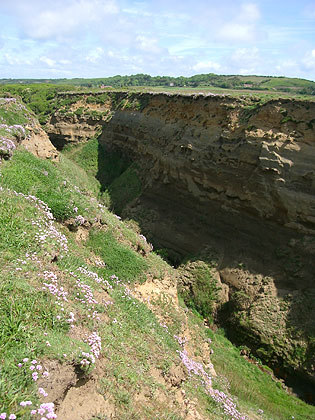 I've been here once before, around 40 years ago, on a geological tour with a schoolfriend. I remember that visit as being on an overcast drizzly day with seaspray blowing up the chine, and the wooden steps down to the beach dangerously slippery. Now, it's much greener and brighter than I remember, but the steps are in disrepair (temporarily, according to the notice at the top) and you can't get down at all. Mimi Khalvati's poem The Chine - quoted previously - although written about Shanklin Chine, seems very fitting:

Every childhood has its chine, upper world
and lower. Time itself seems vertical
and its name too implies both bank and stream.
To be back on the island is to walk
in both worlds at the same time, looking down
on talus, horsehair fern notched through the Ice Age,
Stone Age, Bronze Age and still here at our heels;
...
Every path brings us back to the beginning.
Shanklin Chine is closed for the winter, both ends
barred with notices. But the mind is not.
Or memory. And time is spinning backwards
with the mainland out of sight and the great plain
where herds roamed the floor of the English Channel
and were drowned by it flush again with valleys.

- from The Chine, Mimi Khalvati