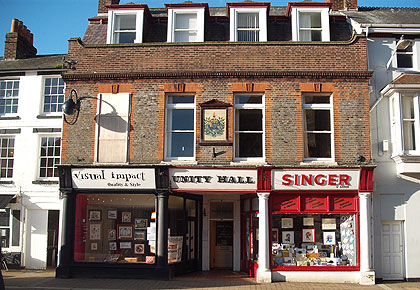 Clare and I just spent a few days in the Isle of Wight to go to my father's 80th birthday party, and as usual, multi-tasked: we visited relatives in Newport and Carisbrooke, we got in some walking, and I pursued a few Maxwell Gray leads. In aid of the latter, while passing through St Thomas's Square (Newport's central square around St Thomas's Church, a.k.a. Newport Minster) on impulse I dropped into Unity Hall, the Vecta Lodge of the Newport branch of the Oddfellows Friendly Society.

I was specifically interested in the possibility that they might have group photos of members, as I've been looking for a photo of Frank Bampfylde Tuttiett (MG's father, who was a long-standing member of the Oddfellows, being lodge surgeon for the Earl Yarborough Lodge (the old name of the Vecta Lodge - I assume the name refers to Charles Anderson Pelham, Earl Yarborough, 1780 - 1846, who is commemorated by an obelisk on Culver Down).  Dr Tuttiett is mentioned several times in the Oddfellows magazine in the late 19th century, mostly for his attendance of anniversary dinners for the Earl Yarborough Lodge, including one in April 1887 when he was toasted for having filled the office of surgeon for 43 years to the satisfaction of all.

The Vecta Lodge did indeed have group photos, but unfortunately none for the 1800s. However, the visit wasn't wasted, as Prue Osborne, the Secretary, extremely kindly showed us the meeting rooms. A notable observation was that the Oddfellows seem to have been considerably ahead of their time in having female members and officers at the beginning of the 20th century.

In the 19th century, the Earl of Yarborough Lodge must have seen some highly sumptuous junkets. You can get the flavour from this account of its 32nd Annual Dinner at the Star Hotel, Newport, in the Hampshire Telegraph for March 17, 1866:

The table was most excellently and liberally supplied with the good things of this life, doing the greatest credit to the landlord (Mr M Newman). The table having been cleared, the following toasts were given and received enthusiastically, being occasionally interspersed with good songs (accompanied on the pianoforte by Mr Mew) - "The Queen", "Prince and Princess of Wales, and the rest of the Royal Family", "Army, Navy, Milita and Volunteers", "Board of Directors and the M.U.", "I of W. District", "Early Yarborough Lodge and the Presiding Officers", "The Honorary Members", "The Surgeon, F. B. Tuttiett, Esq.", "The Secretary, Mr. William Sutton," "The Relieving and Visiting Officers", "Kindred Societies", "The Sick Brothers", "Trade of the Island", "The Host and Hostess", "The Press", "The Chair and Vice-Chair".

That's a lot of toasts. But the society had more a serious role than annual booze-ups; in the days before the National Health Service, subscribing to such sub-Masonic membership organisations provided support for members at times of hardship: medical care, sickness and accident insurance, funeral expenses, and so on.

As described in History of the Oddfellows  / Oddfellows over the years and The Rise and Progress of the Manchester Unity of the Independent Order of Oddfellows, 1810-1904, the Oddfellows have a long history, with various schisms; it's also a surprisingly controversial history. In the paranoid years of the late 18th century, when the government saw any kind of labour solidarity as a precursor to revolution, membership was criminalised. Even in the early 19th century, friendly societies were seen as an attack on landowners' and employer's interests, and the Oddfellows had to alter their practices to avoid the same scammy use of a 1797 law against oath-taking organisations that had been invoked against the Tolpuddle Martyrs.  For more background, see Behind closed doors: the power and influence of secret societies (Michael Streeter, New Holland Publishers, 2008).

The Vecta Lodge is a branch of the largest present-day incarnation of the Oddfellows in the UK, the Manchester Unity Order of Odd Fellows, which celebrated its bicentennial in 2010.  In the heyday of the Oddfellows, the late 19th century, there were several lodges on the Isle of Wight including the Earl Yarborough, East Medina (based in Ryde), Northwood (in West Cowes), Hambrough (in Ventnor), and Culver (in Sandown). The Vecta in Newport is the only remaining on the Island.