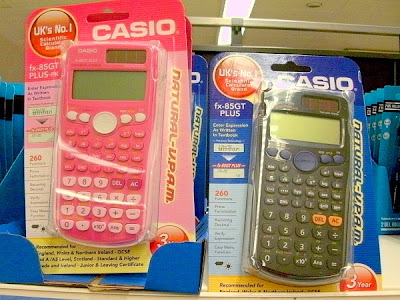 A CALCLIST reference to the Greener Calculator (nothing to do with better colour or better environmental credentials) reminded me of this photo I took recently of this pair of Casio FX-83GT Plus calculators. Gender stereotypes are still with us, it seems. If I needed one, I think I'd get the pink out of sheer perversity; and it'd be far more findable in my office, which is full of gloomy black hardware. I already have a very nice pink geometry set, one of a number of Helix maths sets that come in pink and blue gendered versions. 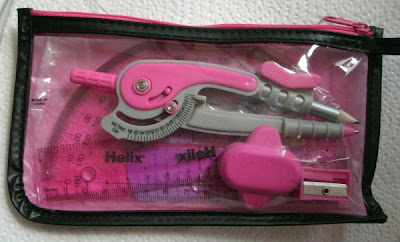 Addendum: I also feel that JML Dryer Balls are gendered. Whose idea was it to have a pink ball with rounded protrusions, and a blue one with angular? But as described in QI - Series G - Girls And Boys - the pink/blue female/male convention is very recent - and in fact reversed - historically.

Addendum 2: I find that the pink Casio FX-83GT Plus isn't entirely unprecedented. Texas Instruments have done a dark pink special edition of their TI-84 Graphing Calculator, and there's also a Canon pink scientific calculator.  TI do scientific calculators in various nice colours, such as the blue-cyan TI-34 MultiView. They come in lime green too, such as this Canon one. And there's a serious side beyond aesthetics: this Sci-Plus Scientific Calculator range for visually impaired users has casing in colours including ruby red, blueberry, bumblebee yellow and lime green to improve keyboard visibility.

On balance, knowing that pink scientific calculators are part of a wider continuum of colours makes me less bothered about the stereotyping angle. Anything that makes mathematical tools more accessible - especially at school and student level - can't be bad.