Voyage into the Deep 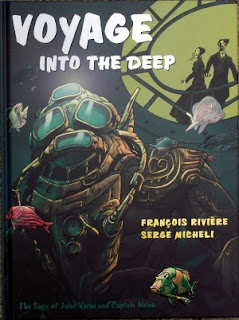 Also from Salisbury, a very nice find in a charity shop: a 75p hardback copy of Voyage into the Deep, a graphic novel written by François Rivière and illustrated by Serge Micheli (originally published in French in 2003 as Voyage sous les eaux).

The name derives from Jules Verne's working title for his 1870 Twenty Thousand Leagues Under the Sea, and the book is an SF/fantasy exploration of the creation of the novel. It begins in 1866 in the seaport of Le Crotoy, where a mysterious boy - Verne calls him 'Bert' - gives the author a cryptic letter and bottle of green-glowing water "with electric properties". Inspired, Verne begins to write, and the book tells interwoven narratives of Twenty Thousand Leagues Under the Sea and Verne's own adventures; these include acquaintance with an Indian self-styled Princess, Mikah, who is searching for her father; an artist called Daniel Wragg, whose architectural design for his London 'Sarcophagus Club' becomes reflected in Verne's concept for the interior of Captain Nemo's Nautilus; and a Nosferatu-like Margate medium called Robert Lee, whose seance makes direct contact between Verne and Nemo.

Rivière explains in the afterward that the story sprang from his personal fascination with Verne and the character of Captain Nemo, and the book is rich in internal allusions to Victoriana, Verne's life, and his works. Mikah strongly recalls Princess Aouda in Around the World in Eighty Days, and there's reference to Verne's repeated legal issues over plagiarism (both accused of doing it, and being plagiarised from - see Jules Verne: journeys in writing, Timothy A. Unwin, 2005 and Twenty thousand leagues under the seas, Jules Verne, trans. William Butcher, 1998). "Daniel Wragg" is fictitious, but his Sarcophagus Club appears to allude to the architecturally eclectic club of that name in Thackeray's Book of Snobs. (I did spot one anachronism here - Verne likens it to Luna Park, an amusement park near Porte Maillot, Paris, but this didn't exist until two years after Verne's death).

Any graphic novel exploring the mythos of Captain Nemo is bound to fall under the shadow of Alan Moore's The League of Extraordinary Gentlemen; and Rivière's story, while interesting and evocative, is not as tightly plotted, leaving far more loose ends. Who is 'Bert', and why does he closely resemble Verne's wife? Is Mikah Nemo's daughter? What is the vicious aquatic homunculus that makes several unexplained appearances? Is the whole adventure Verne's fabulation in a fever? Some of these questions are probably answered in the second volume, Voyage sous les eaux: L’île mystérieuse, but Voyage into the Deep is nevertheless more than adequately accessible as a standalone work. It's beautifully-drawn, and thought-provoking: a good 75p's worth.