MetaFilter just had a good compendium of links to articles critical of the sexist conventions of superhero costumes in comics (see "You don't remember anyone named Dick?" "No." "Garth? Dustin? Vic?" "I can't recall." "Lilith? Gar?" "You are boring me.") - to which the antithesis is the excellent Women Fighters in Reasonable Armour. 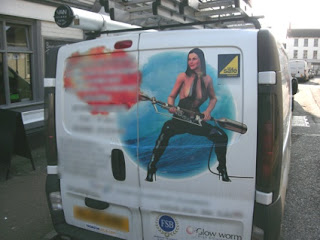 I finally got a good picture of the lady above, who - apparently suffering from severe hip dysplasia - has clothing highly unsuited to wielding a flame-thrower. She comes from the van of a local firm, who deserve some kind of prize for the most jaw-droppingly naff and sexist trading logo I've seen for years. Some artist actually went to the considerable effort of designing it for them: did he or she not advise them how wildly inappropriate it is as a professional logo in the 21st century? It's tempting to "name and shame" the firm, but that risks giving them better Google ranking.

The design has a strong similarity to this Sony.com wallpaper image of Lucy Liu for the 2003 movie Charlie's Angels: Full Throttle. While just as impractical, it's rather more decent; and she at least looks like she's serious about the flame-throwing, unlike the strangely simpering character on the van. In the film - see this filming locations page - she wears a long-sleeved high-necked tunic and gloves. 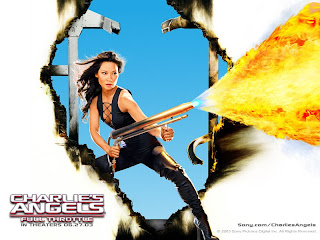