Round The Point: Exmouth

Saturday 24th was a beautiful and extremely mild Spring day, sunny but hazy. As Clare was at a writing event and I had an errand to do (of which possibly more later), I decided to take myself to Exmouth.

I've come to really like Exmouth. It's like a number of southern seaside towns in having a not especially folksy centre surrounded by a suburban sprawl. But it has good shops (small useful ones, not megastores or little boutiques selling frilly tat), traces of faded Victorian elegance, plenty of open space, and superb coastal and river vistas.


I decided to walk to and from The Point, the easternmost tip of Exmouth by the docks. It's quite surprising in some ways; you walk south-west past the railway station, sports centre and sports ground, then along Camperdown Terrace, which looks like a perfectly normal late-Victorian residential road - except when you reach the end there's a slipway revealing that the houses on the north side back straight on the Exe estuary. This is the older part of this end of Exmouth.


Turning right and going down the slipway, at low tide you can walk with caution on to Cockle Sand, a large expanse of sandy shingle on the estuary adjacent to the town, and follow the shoreline left round The Point by the new Exmouth Dock residential developments.


Although the whole modern development at The Point and Exmouth Quay is subject to considerable ongoing negotiation - see Exmouth Quay Residents' Association - and perhaps I'm missing a deal of controversy, it does seem to be steering a successful course between residential and maritime use.

From The Point you can walk round to the seaward side of Exmouth via Exmouth Quay (which forms a harbour inside the residential complex) and across the bridge by the ferry landing that serves the Exe and coastal cruise boats, as well as the Starcross ferry.


Round the corner, you can either follow the upper promenade or take the steps down to the foot of the sea wall; either way, you can walk back toward the Esplanade, Exmouth's more conventional resort frontage, which is topped by the Beacon, a row of the town's older clifftop houses whose past residents have included Lady Nelson, and Lady Byron and her daughter Ada (later the Countess Lovelace of computing fame).


You can either continue to the Bath House pub (originally just that, a Victorian bath house) and back into Exmouth centre via the tree-lined (and squirrel-populated) Bath Road. Alternatively, Alexandria Terrace cuts straight back to the centre, past the Imperial Hotel with its neo-classical Temple, and across Manor Park back to the shopping centre.

See The Temple and Tower at Exmouth for a detailed piece on the Temple. 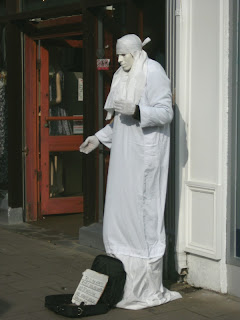 Back at the centre, and the scary statue-man was still there ...

It was a pleasant, level stroll for a Spring afternoon - about 1.75 miles. However, the weather was so invigorating that I decided on impulse to walk home to Topsham along the recently-completed National Route 2 Exe Estuary Trail: of which definitely more later.