What D'you See in Pictures?

Above, the results of a partially successful search: an introductory segment from the seldom-shown 1954 film Three Cases of Murder. This British film, a portmanteau film of a sort no longer made, comprises three murder-themed shorts, all featuring Alan Badel, and all excellent. One, You Killed Elizabeth, is a very English darkly comic whodunit concerning a rivalry between two business partners for the attention of a woman that leads to murder. Another, Lord Mountdrago, features a Somerset Maugham psychological drama with Orson Welles as a high-ranking politician whose thoughts turn to murder when he experiences humiliating dreams involving Owen, a Welsh MP whose career he ruined - dreams whose content Owen seems aware of. However, the third, In the Picture, seems to be the one that people find most memorable.

In the Picture (directed by Wendy Toye from a screenplay by Donald Wilson adapted from a Roderick Wilkinson story), is a wonderful piece of English Gothic that starts in a picture gallery with Badel's character - who is never named -  sitting opposite a painting with broken glass. He accosts a mild-mannered guide, Jarvis, enquiring about the latter's fascination with the painting - a country house in a gloomy landscape titled Landscape - Artist Unknown. After expressing the view that the composition could be improved by a light in a window, "Mr X" proceeds to talk Jarvis closer and closer and into the painting with him. They enter the house to find a draughty expressionist interior and its two other occupants: an unnamed woman and an artist-taxidermist called Mr Snyder. It turns out that the three have been "assigned" to the painting as a kind of purgatory, and Mr X is the artist who painted it. The visit rapidly turns to horror for Jarvis, who finds he's the pawn in a bargain between Mr X and Snyder; Mr X gives him Jarvis as a vivisection victim in exchange for the use of Snyder's coveted candle. We hear a scream from the painting as Mr X lights the candle with Jarvis's matches. The segment ends with Mr X dissatisfied with the composition - he wants another light - and he exits the painting again to sound out another victim, a young woman with a cigarette lighter. 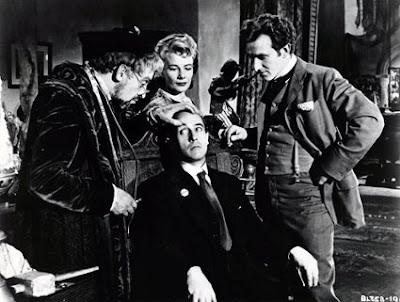 There's been a deal written about this piece: see, for instance, the account at British Horror Films (Three Cases Of Murder); and Drawn and Quartered: Wendy Toye’s In the Picture (Jorge Didaco, Senses of Cinema, Issue 34), which says of it:


British cinema has drawn extensively on these patterns of ghastly horror (from Hammer to Amicus and beyond), but rarely so quietly shocking and perverse as in Wendy Toye’s adaptation of Roderick Wilkinson’s short story “In the Picture” (with a screenplay by Donald Wilson)


I was interested in tracking down the original story, and as I said above, I was partially successful. It was slightly difficult because virtually all accounts get the story name wrong: it's not In the Picture but What D'you See in Pictures?. I managed to trace it, or at least a reprint after the film was made, to a 1964 edition of Short Story International magazine (Google Books snippet view here - though the Google Books metadata is wrong; the edition is Short Story International, Volume 1, No. 11, September 1964). The blurb runs:


What D'you See in Pictures? by Roderick Wilkinson
Have you ever seen a painting that made you want to walk right into it and become a part of the scene? Don't ever wish too hard. What D'you See In Pictures? is reprinted from Courier Magazine, a British Publication.

A trifle annoyingly, this is one of those instances where Google Books snippet view doesn't recover enough to skim the story, and often purports to show snippet view but shows an irrelevant or blank portion of the page. All that was findable was the start and finish of the story. The start is similar to the film, except that the narrator is a draper ...


If I say a word of it to the authorities — or even to my wife — they'll take me away. But I'll tell you.

It was in July. You remember the hot spell we had — lovely summer weather. I was in the park one Tuesday afternoon (I'm a draper by trade and Tuesday's my day off). I felt very warm out there so I came into the Galleries because I thought it would be cooler. The Galleries were very quiet — and I didn't meet anyone until I came in here. And it was here I met him. He was sitting here on this very seat. I sat down beside him. He was a queer-looking type — dressed in a black raincoat with a sort of cape at the shoulders, and he wore a big-brimmed hat; it was black too. ...

... and at the end, the narrator escapes the painting, failing to rescue another character from it.


another form in front of me — the dark form of the hole in the ground.

I threw myself head and shoulders first through the cavity, shouting all the time — "Come through — come through. Give me your stick — your walking stick. I'll pull you through."

I don't know what happened. I think I must have fainted. When I came round to my senses the first thing I saw was the grain of that wooden floor in the art galleries. When I got to my feet I stared at the painting.

He was there — just as you see him now — hanging by the neck from the third gallows.

Sane? Mad? I don't know. I have only one small link in the chain to show me that I must be sane. It must have happened. When I picked myself up from that floor in the galleries I was leaning on his walking stick.

I don't know what happens in between - maybe it's excellent - but the narrator's survival rather puts in the bracket of "cosy" horror. Donald Wilson's screenplay, with the urbane and completely amoral Mr X as framing character and chief driver of the plot, makes it a much darker and stronger story; and Wendy Toye's overall visual treatment of the piece, including the stunning chiaroscuro of the best black-and-white films of that era, raises it to perfection.
at 13:20