The Secret of the Desert: across Arabia by chariot-boat-tank

I wrote previously about the author Edward Douglas Fawcett, after seeing Kevin Dixon's Torquay’s Other History post The Science Fiction of Edward Douglas Fawcett, and linked to his 1893 novel Hartmann the Anarchist; or The Doom of the Great City. As an update, I just found among the growing collection of digitised works at the British Library another of his SF works, the 1895 The Secret of the Desert, or How We Crossed Arabia in the “Antelope“.

The overall thrust of the story is a fairly typical colonial-era exploration adventure. Three gentlemen, Thiselton, Symington and Archer, get together at Thisleton's house on Warberry Hill, Torquay, and discuss plans to go to Arabia to find out the fate of Arthur Manners, an explorer colleague who has been missing two years. The SF twist is they go on this adventure in the Antelope, an armoured vehicle of Thisleton's invention. 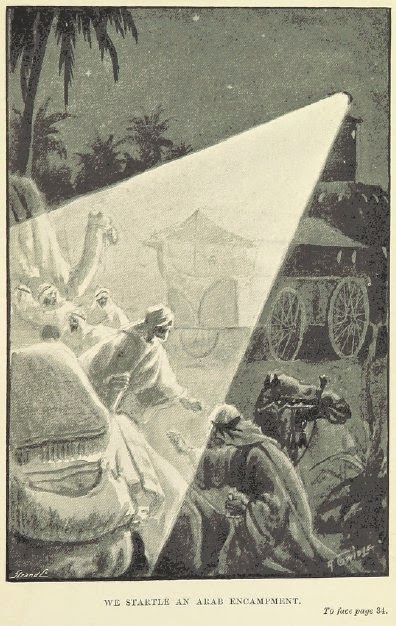 The Antelope has been taken as Fawcett's anticipation of the tank, but it's not at all styled like one; it's more like a boat-chariot hybrid on six giant bicycle wheels, with an eccentric design featuring an antelope's head at the front and an armoured cupola at the back. It's not actually amphibious, as The Encyclopedia of Science Fiction says, just styled somewhat like a boat.


So this was Thiselton’s mysterious ‘Ship of the Desert’! What we saw was a yellowish-brown craft, of seemingly forty feet or so in length, which was supported on three pairs of tube-spoked pneumatic-tyred wheels, the central pair having diameters of fully eight feet. A figure-head, resembling an antelope, horns, head and neck, rose above us, to a height of seven or eight feet, curving downwards and inwards till the lower portion of its base joined the deck-frame or platform at a point at about three and a half feet above the floor of the shed. Along the edge of this frame or platform ran a light scrollwork railing, four feet high, broken between the front and central wheels by a gap, serving as a  gangway, but reaching, if we ignore this break, nineteen feet or so from the rear of the figure-head to a point opposite the insides of the hubs of the great central wheels, where it gave place to the steel-plated walls of a sort of deck-house or citadel that rose with a dome-like sweep to a flat roof some ten feet above the deck. The area of the roof in question was little more than half that of the citadel-base. Planted in its centre was a conning-tower, having small square ports, and capped by a movable apparatus, seeming designed to furnish a ‘search-light’; this device was poised on a short thick stem, over twenty feet above the shed floor. The lower portion of the citadel was studded with loopholes. At the rear of the citadel ran a semicircular fringe of railing bounding a small portion of clear ‘deck,’ comprising the stern-enclosure of this extraordinary craft. A stairway led from this enclosure to the roof mentioned above.

‘Here are some particulars which may prove of service,’ said Thiselton, thrusting a sheet of paper into my hand. ...’

Fawcett goes at this point into immense geeky detail: a list of more dimensions; descriptions of the chain-gear steering; the tyres' treads and puncture-proofing; the braking system; and, of course, the means of propulsion. The latter, I guess, makes the story early 'dieselpunk' rather than 'steampunk', as the Antelope is driven by an internal combustion engine, running off a reservoir of liquefied gas so calorific that nowhere in the novel does it need refuelling:


The only hypothesis that I could find tenable was that Thiselton had invented some novel kind of gas-engine.

‘Not so far wrong,’ said he, when I put the question to him; ‘but the gas in question is neither the vaporized oil or the ordinary coal gas you imagine. It is a nitrogen compound, discovered after arduous experiment in the laboratory. What it is precisely is my secret. The world will, perhaps, be initiated into this secret after I have tested its importance thoroughly on this expedition; but I intend to keep it to myself for the present. If the compound is a discovery of the importance I believe it to be—well, it will revolutionize industry, and probably much else. However, this by the way. Now, this gas explodes with great force, not too great, however, for the resisting and stress-bearing capacities of good cylinders and rods. And in this lies the power that will drive the “Antelope.” Do you see that large steel reservoir in the corner over the farthest cylinder? Well, then gas is stored in it at a pressure of 300 pounds to the square inch. The quantity contained can be made good from time to time by vaporization of the liquid form of the gas, which is kept at a very high pressure in specially strong steel receptacles for use when required. Of that anon ...’

The story itself is a rather routine adventure, researched in often excessive topographical detail (e.g. agricultural dissertation) clearly based on travelogues and reference works. As Fawcett writes:


I desire to acknowledge my indebtedness to the general literature of Arabian travel, and, more particularly, to Palgrave’s most interesting ‘Central and Eastern Arabia,’ for the geographical and like facts required as the support of this story.
- The Author, Winthorpe, Torquay 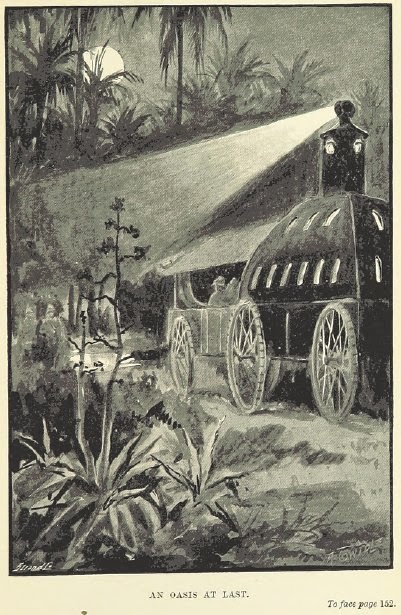 They meet friendly and unfriendly Arabs (shooting the latter); overcome difficulties such as a simoom and hot sands; pick up a French explorer, who is rapidly killed off; are temporarily imprisoned and have to retake the stolen Antelope (shooting large numbers of their pursuers); change a tyre in the middle of a battle (shooting many more); brave a visit to Nejd, where Fawcett's descriptions become vitriolic about the "devoted followers of El Wahhab, leader of a sect of fanatical Mohammedans"; run short of water; find a Lost Race; find the mythical Oasis of Gazelles and its treasure-laden temple; and so on, until (no apology for spoiler, as this is given away in the frontispiece picture) they rescue Manners. 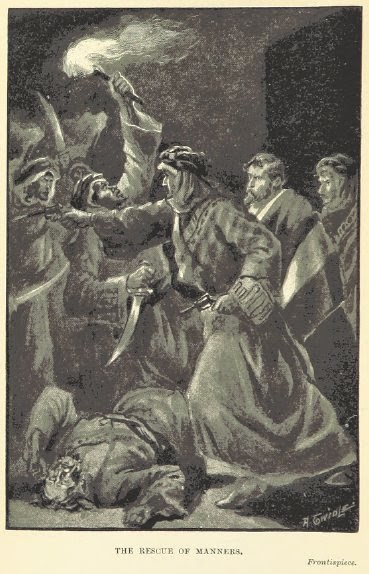 I'm not sure what to make of the book. It's all very energetic, with a kind of Jules Verne flavour, and it's interesting as early SF. But it really is a product of its time, as a killfest of stereotypical foreign enemies. All ends happily for the explorers, back at Torquay.


We are now leading prosaic lives at home, but I am by no means sure that Arabia will not see me again. From time to time Thiselton throws out mysterious hints that he is perfecting an invention with which the poor old ‘Antelope’ herself was but a clumsy toy. His adventures have whetted his appetite for travel; and I do not believe that the cosy villa at Torquay will be permanently garrisoned by its owner.