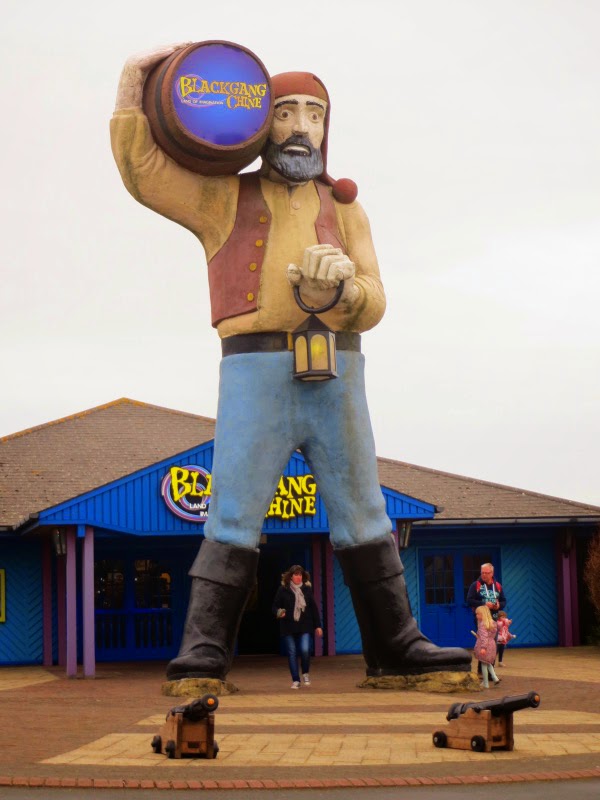 Founded by Alexander Dabell in 1843 - see Blackgang: a whale of a chine for something on the origins - Blackgang Chine is Britain's oldest theme park, and also one in a precarious situation. Set on the edge of an eroding landslip, it has been constantly in retreat, and reinvention, ever since it was established. The chine - the coastal ravine whose scenic attraction was the reason for its setup - has been destroyed by coastal erosion over the 20th century. Yet some elements of the original park still remain, notably the skeleton of a whale washed ashore in 1842.

I came to Blackgang Chine with a fairly complex mix of expectations (and worries). Given that it has a strong focus on family entertainment, I was a trifle worried that Clare and I would be out of place as a middle-aged couple. Actually I was more worried on Clare's behalf, as I was bringing along a deal of nostalgia from a dimly-recalled childhood visit in the early 1960s (I can remember a maze, a frightening pirate cave with a diorama of a dimly-lit ship heaving on an oilcloth sea, the whale skeleton that formed the ceiling of the curio room, peepshow machines showing innocuous things such as the inside of an ants' nest, a wishing chair, an "electric shock chair", and, chiefly, gardens and scenic paths). And on top of that, there was the anticipation, and potential for disappointment, at visiting a location I now know inside-out, geologically and historically, from years of fairly intensive research. 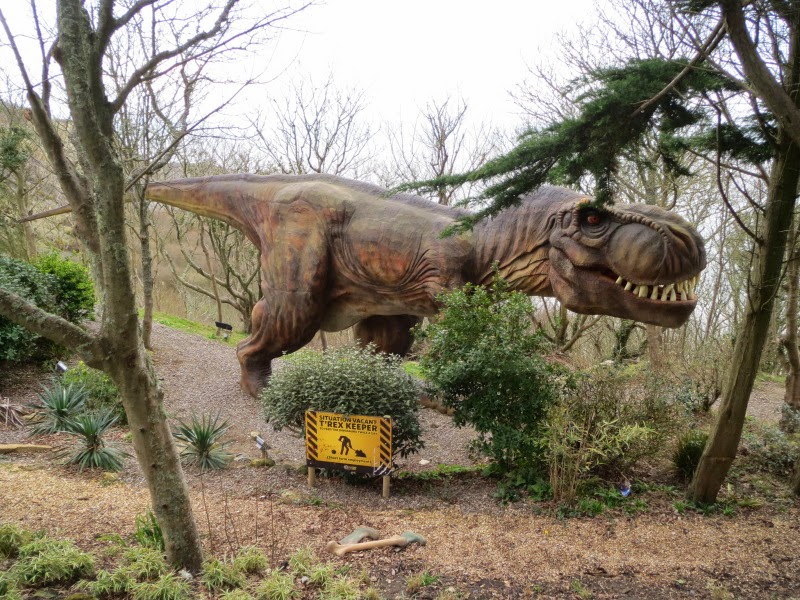 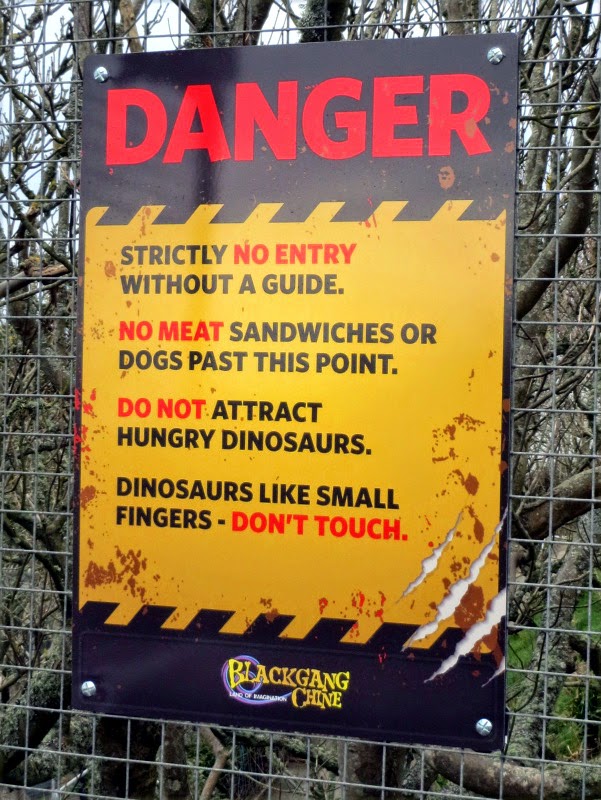 On the first count, we needn't have worried. While we weren't going to play on the pirate ship or put on cowboy hats, the site has "an eclectic mix of attractions", with children's attractions very well integrated with those of more general interest. The style is what might be called 'modern quaint': well-designed animated displays, of which pride of place must go to the new Restricted Area 5, a circular outdoor walk through a wittily-captioned dinosaur enclosure, alongside Rumpus Mansion, a goblin-infested house (the former Five Rocks villa). 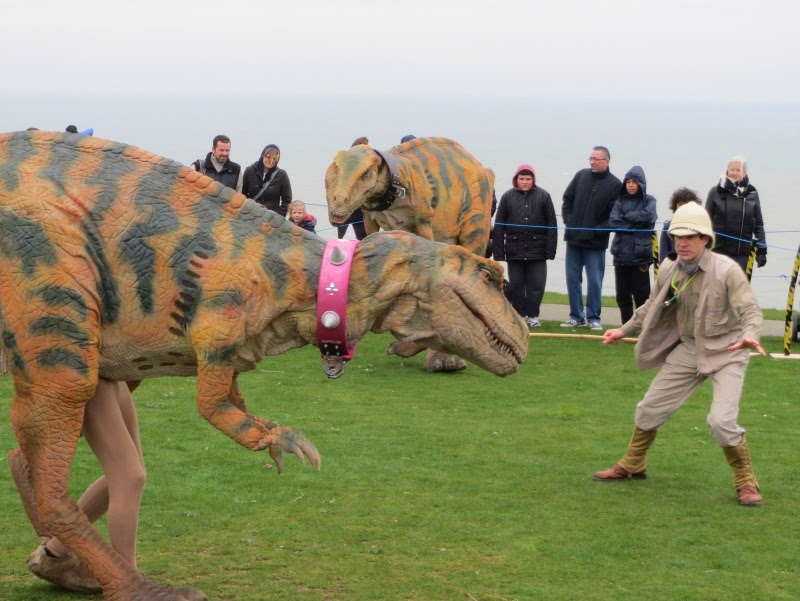 You'd have to be a miserable toad not to enjoy these, or the Musical Pet Shop with its singing animals; the Valley of the Dodos; the Crooked House; the Triassic Club, where you're weighed up to go on the menu for a very affable dinosaur; the Smuggler's Cave (which still has the heaving ship I remember); and the live 'Shadow and Sheila' T Rex sheepdog trials held on some days. 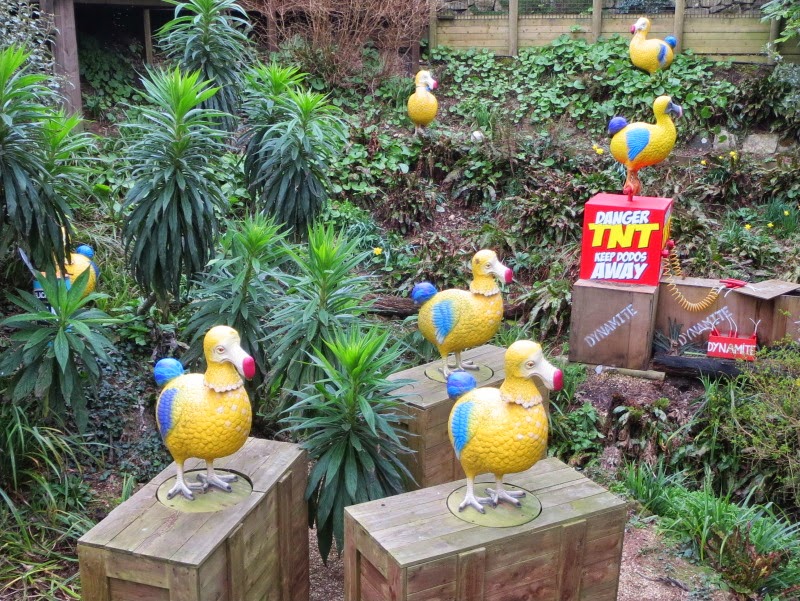 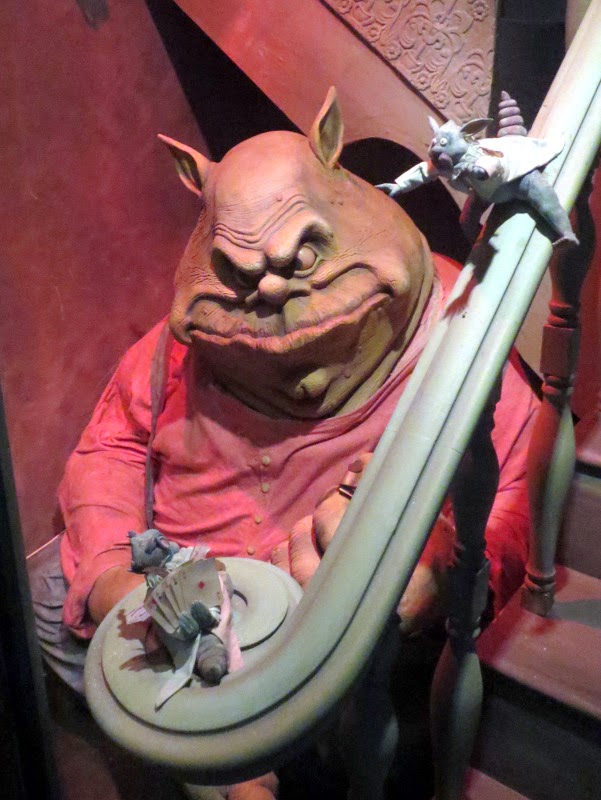 Recent years have seen, furthermore, the development of sections of more mature interest: the World of Timber (a display of the traditional wood industry), the Wight Experience (a cinema showing an HD aerial movie of the Isle of Wight), and Disappearing Village & BBC Coast (a very polished museum relating particularly to Blackgang's past - and housing the famous whale skeleton). 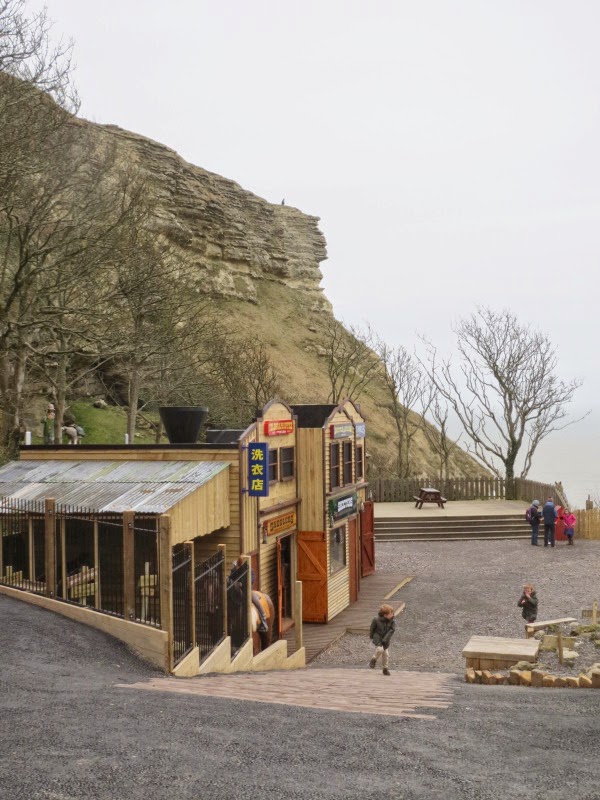 Admission gets you a multi-day pass. We didn't need it, but easily spent four hours there, and anyone with children, visiting all the attractions (which include a small roller-coaster and water-slides) wouldn't have trouble with multiple visits, there being so much here, despite the park's relatively small footprint. The Park Map, while topologically accurate, doesn't fully convey the terrain; apart from a central flat area, the park rambles up and down the multi-level terrain of a wooded landslip, often with spectacular views along the coast, across the crumbling cliff edge - where you can see remnants of the park's former paths - and down to the sea. For instance, Fairyland section is up in the woods above the car park, and the Western-themed Cowboy Town is even higher, right below the crags of Gore Cliff (which we visited in far better weather in 2012 - see The road more travelled ...). 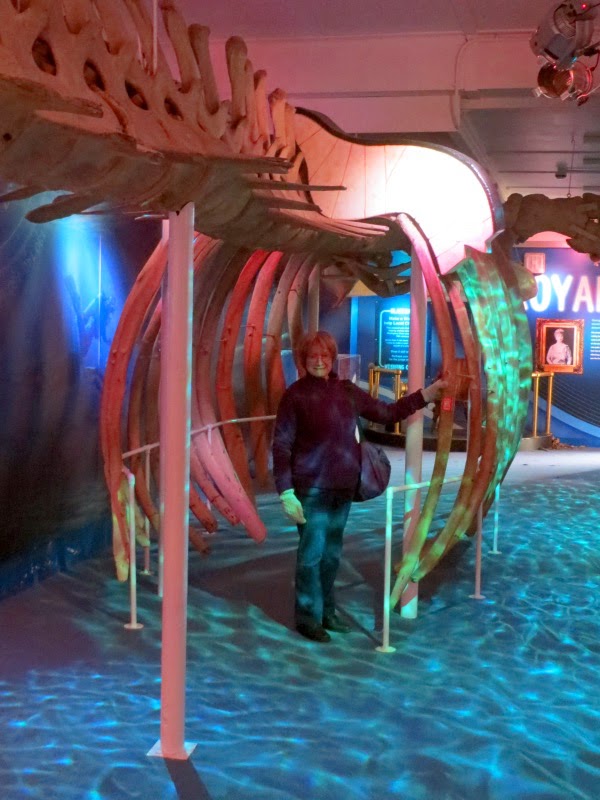 What else? Food: you won't starve. We'd had a huge cooked breakfast, so didn't eat, but there are two cafes (the conventional Chine Cafe, and the Western-themed burger bar and takeaway, La Cantina). If you want a slightly more sophisticated snack, there's also Chocabloc, a waffle and crepe shop that sells decent coffee, as does the Captain Jack's stall in Pirate Cove.

I'm writing more about the 'Undercliff geek' aspects of the visit in the following posts (there have been both direct spinoffs, and literary out-takes). But for now I'll say that we both thoroughly enjoyed it.
See the Blackgang Chine website for further information.

If you don't mind spoilers, YouTube - search "Blackgang Chine" -  has plenty of videos, both current and historical.