The Beauties of the Shore and bogus quotations

I have a regular peeve about misquotations, but I suppose it was more forgiveable a couple of centuries ago when you couldn’t Google sources. Nevertheless, you occasionally run into positively wilful examples that arent explicable by good-faith misremembering, as in DM Stirling’s 1838 The Beauties of the Shore; Or, A Guide to the Watering-places on the South-east Coast of Devon.

The Beauties of the Shore (Internet Archive beautiesshoreor00stirgoog) is is a mildly interesting account of East Devon towns and villages. It's very impersonal and completist – the reader will tend to glaze over at the 'laundry list' historical detail in places, such as the lengthy chunks of heraldic descriptions of church monuments. I don't get any impression of beauties of the shore; this is a real Gradgrind account of the region - possibly unsurprising given that the author was a headmaster.

Consequently I found myself sidetracked by looking up the uncredited poetry quotations Stirling uses to head some of the chapters. They mostly turn out to come from very different contexts than the texts they accompany. While there’s nothing inherently wrong with this, Stirling is distinctly cavalier with the texts; most are misquoted in some way, but also he's often blatant in ripping off poetry written about other Devon locations, even rewriting to splice in substitute placenames or to make other 'improvements' (in one example, changing a sunset to a sunrise).

Here are the offending specimens. The names in bold are Stirling's chapter titles.


Seaton
'Through glory-streaming clouds, the sun's broad orb
Appears: the gilded vapours wave along
The verdant vale, where bright rivers wind,
Delicious in the sweetness of the morning air:
The shadowy distance melts to fluid gold,
And magic grandeur kindles into day.'

This is a poorly-remembered (or deliberately embellished) chunk of Nathaniel Howard's 1804 Bickleigh Vale...


Thro' glory-streaming clouds, the sun's broad orb
Descends: the gilded vapours wave along
The verdant vallies, where bright rivulets wind
Delicious is the sweetness of the air :
The softening distance melts to fluid gold ;
While to the east, soft ruddy hues recede
Slow-fading to a colder, leaden dye.

... and Stirling has revised Howard's sunset into a sunrise. See Bickleigh Vale, with other poems (Internet Archive bickleighvalewit00howa).

Axmouth
“In her once glowing vest, to thee my lyre
Shall oft be tuned, and to thy nereids green,
Long, long unnoticed, in their haunts retired.
Nor will I cease to prize thy lovely strand.
Thy towering cliffs, nor the small babbling brook
Whose shallow current laves thy deep-sunk vale.

This comes from Hugh Downman’s 1788 Infancy, or The management of children, a didactic poem, in six books, (see Internet Archive infancyormanage00downgoog) and is actually  referring to Dawlish. See, previously, Downman's Infancy.


Rowsedoun
Hail to the rising waters,
Bright, buoyant, fresh, and free;
Hail to thee, dimpling daughter
Of the far-rolling sea!
Pure from the azure fountain
Of the unfathom'd main,
Thou bring'st to the parched mountain
The cup of joy again.
Voices of music follow
Thy silver-sandall'd feet;
Rock, mead, and woodland hollow.
The ocean-stranger greet
But now as swiftly fleeting
Unto her native deep,
See the bright nymph retreating;
Away the wild waves leap.

This is from The Inland Tide by Henry Sewell Stokes, from his 1836 collection The Vale of Lanherne and Other Poems (Google Books ID K8o_AAAAYAAJ).

This is an Anglicised version of ...


“There simmer first unfald her robes,
And there the langest tarry”

... from Robert Burns’s Highland Mary. (Stirling, of Scottish stock, ought to be ashamed at 'correcting' Burns's dialect). Burns is referring to the scenery around Coilsfield House (later called Montgomery Castle) near Tarbolton, Ayrshire, where his love Mary Campbell worked.

This seems to originate with William Beloe’s 1786 The Rape of Helen, from the Greek of Coluthus, with Miscellaneous Notes (Google Books ID zY4pAAAAYAAJ):


Fresh and alert, forth from the silver tide,
The blooming Paris sprung, with conscious pride.

It seems to be a regularly lifted classical allusion; elsewhere you can find the "conscious pride ... silver tide" couplet used to refer to the Avon, the Exe, and the Griese (a river at Ballitore, Ireland).


Widworthy
“Here green was the com, as I journied my way,
And bright were the dews on the blossoms of May,
And dark was the sycamore's shade to behold.
And the oak's tender leaf was of em'rald gold.
The thrush from his holly, the lark from his cloud.
Their chorus of rapture sung jovial and loud ; —
From the soft vernal sky, to the soft grassy ground.
There was beauty above me, beneath, and around.”

This is from The Spring Journey, c. 1817, by Bishop Heber (Reginald Heber, Lord-bishop of Calcutta). Heber was actually writing about a horseback journey into Wales. The poem is quoted in volume 1 of the biography by Amelia Heber (Internet Archive lifeofreginald01hebe).


Farway
“Here down the flow’ry vale, on either side,
Within the hedges, dress’d in flow’ry pride,
The votive warblers make the covers ring
With love’s fond notes, which they in transport sing.”


“While all along the vale, on either side,
Within the hedges dress’d in flow’ry pride,
The coupled finches make the coverts ring
With love’s fond notes, which they in transport sing.”

There are lawns, and habitations of wild beasts,
and a youth patient of labour, and contented with a little.

That one checks out, although some versions have “exiguoque” rather than “parvoque”.

For once, this one is authentic (if uncredited). This is part of a sonnet in the anonymously-written 1816 The beauties of Sidmouth displayed. See the 1820 edition (Internet Archive beautiesofsidmou00butc), which identifies the author as the Rev. Edmund Butcher.


Bicton
Now see how Bicton beautifully lifts
Her bank, high peering o’er the eccentric stream!
Mark how the pensile woodlands from the brink
Of the clear labrinthian waters, clothe
The slopes;—one deep and dark and graceful sheet
Of verdure, climbing to the aerial ridge.

This is from NT Carrington’s 1820 The Banks of Tamar, a Poem, in which the original line was:


But see, how Devon beautifully lifts


Exmouth
….. By breezy hills,
And soft retiring dales, by smiling lawns,
Bold headlands dark with umbrage of the groves,
By towns and villages, and mansions fair,
By rocks magnificent, and potent rush
Of the mysterious ocean, we have attain'd
The gay and beautiful town of Exmouth.'

Another chunk ripped from The Banks of Tamar, originally ...


Through every maze perplex'd where Tamar loves
To lead the voyager! By breezy hills,
And soft retiring dales, by smiling lawns,
Bold headlands dark with umbrage of the groves.
By towns, and villages, and mansions fair,
And rocks magnificent, the potent rush
Of the mysterious ocean has impell'd
Our bark to day; but, mark! its force is spent.

... with a placename grafted in.

DM Stirling (Donald McNee Stirling, according to the 1898 Colytonia: a chapter in the history of Devon) is credited on the title page as “Master of the Free Grammar School of Colyton, and author of The Torquay and Teignmouth Guide, History of Newton-Abbot, Discourse on the Seasons, &c”. He really ought to have known better than such shoddy, if not outright dishonest, scholarship. Zero out of 10. 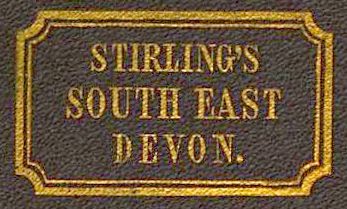