Memorials of Exmouth by the Rev. William John Wesley Webb (aka the Rev. William Everitt) is a pleasant and eclectic late 19th century compendium of Exmouth history and trivia - as the author describes it, a "scrap-book ... put together as a History for the Parishioner rather than a Guide to the Visitor. The latter, however, may get from it as much as he cares to know".

I read it a while back, but it's hitherto been quite difficult to find online. Google Books is generally a good starter for finding 19th century historical texts. But as I've mentioned, a frequent impediment to UK readers is the Google policy of only providing snippet view of post-1865 books. This is purely policy - not a legal issue, since works are long out of copyright - and increasingly you can find such texts at alternative sites that host the Google scans or others: I've found the Internet Archive, Hathi Trust, British Library and Bodleian Library especially useful. In this case, two editions of the book - or rather one and a half - are available digitised as PDFs from the Bodleian.

First, a minor bibliographic puzzle elucidated. There are two editions: the 1872 by "the Rev.William Webb, B.A., Curate of Littleham-cum-Exmouth" and the 1883 by "the Rev. William Everitt, M.A., formerly Curate of Littleham-cum-Exmouth". While it's clearly the same person, there's newspaper confirmation in the form of a legal notice about Webb changing his name in 1880:


CHANGE of NAME.—Notice is hereby Given, that by a Deed Poll, bearing date the 26th day of October, 1880, to be enrolled in the High Court of Justice, I, the undersigned WILLIAM EVERITT (heretofore William John Wesley Webb), clerk in Holy Orders, rector of the Church of Allhallow’s, Goldsmith-street, in the city of Exeter, did ASSUME for myself and my wife, and the issue of our marriage, the SURNAME of EVERITT, instead of WEBB, in perpetuation of the family name of Sir John Everitt, late of Westoning, in the county of Bedford, and of Sloane-street, Chelsea. And I did further declare my intention from thenceforth to relinquish my names of “John and Wesley,” and and on all occasions to be called and known by the name of William Everitt only.—As witness my hand this 26th day of October, 1880. WILLIAM EVERITT.
Witness, GEORGE HIRTZEL, Solicitor, Exeter.
- The Standard (London, England), Friday, October 29, 1880; pg. [1]; Issue 17559. 19th Century British Library Newspapers: Part II.

The contents of the 1872 edition are: 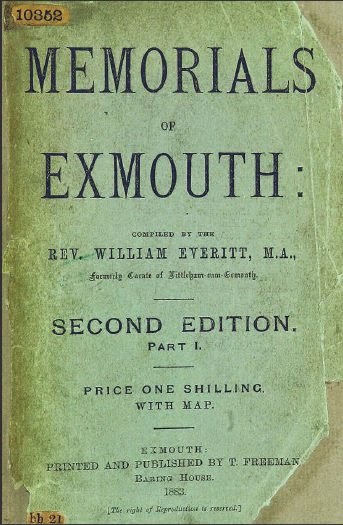 There are plenty of interesting anecdotes in the chronology: descriptions of the former shoreline before the reclamation of land that makes up much of modern Exmouth’s centre; a rather overblown obituary of Agnes Ibbetson, botanist and polymath; the origins of the Temple in the grounds of the Imperial Hotel; the odd freak accident, such as John Radford's horrific shooting with a punt gun (not just with the massive charge, but the 'worm rod' too) and blacksmith James Blackmore's child's fatal swig from a boiling kettle; the spooky story of the infant Fontelautus Dennis (as told in his father's weird Subversion of Materialism, by Credible Attestation of Supernatural Occurrences); anecdotes of Lady Nelson; various contemporary reviews (good and bad) of Exmouth; the many philanthropic works of Lord and Lady Rolle that still shape the landscape of modern Exmouth; the 1847 bread riots; the mysterious and scandalous Hortense de Crespigny; food riots in 1867; and much more.

The 1883 second edition is only findable as part 1, the chronological events section, but it's worth it for the very nice map, Freeman's Plan of Exmouth and its Neighbourhood, that forms the frontispiece. 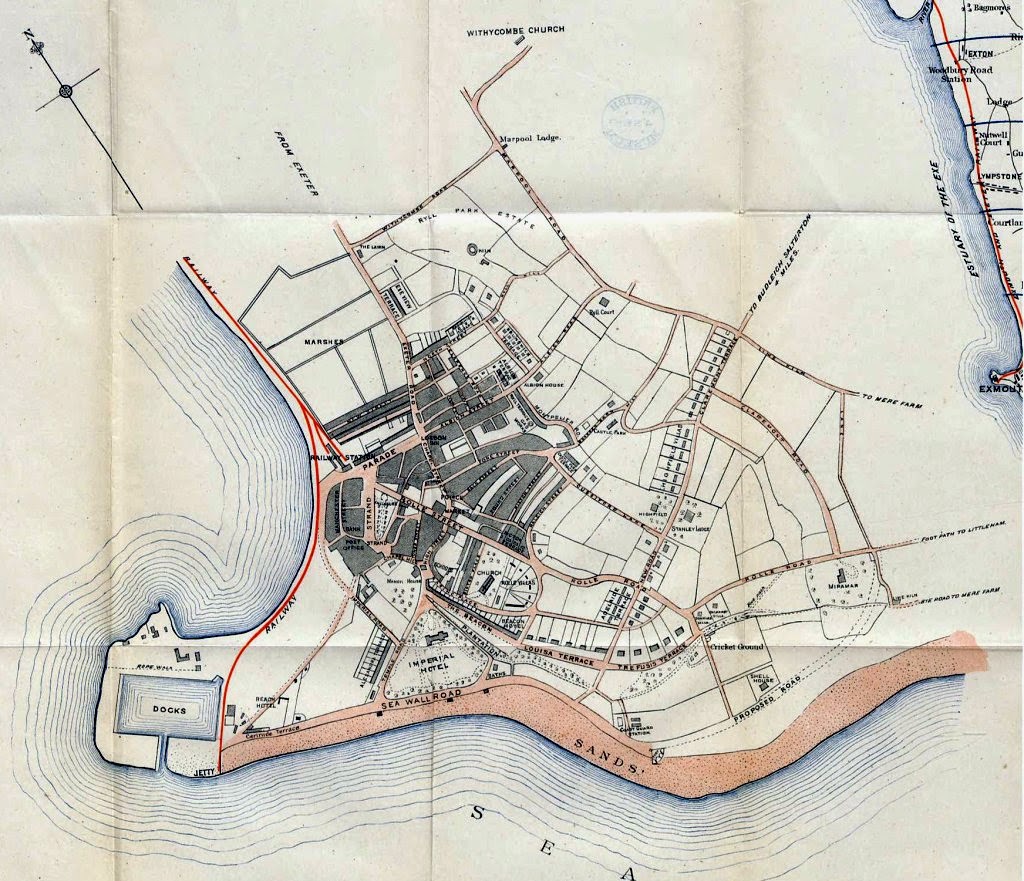 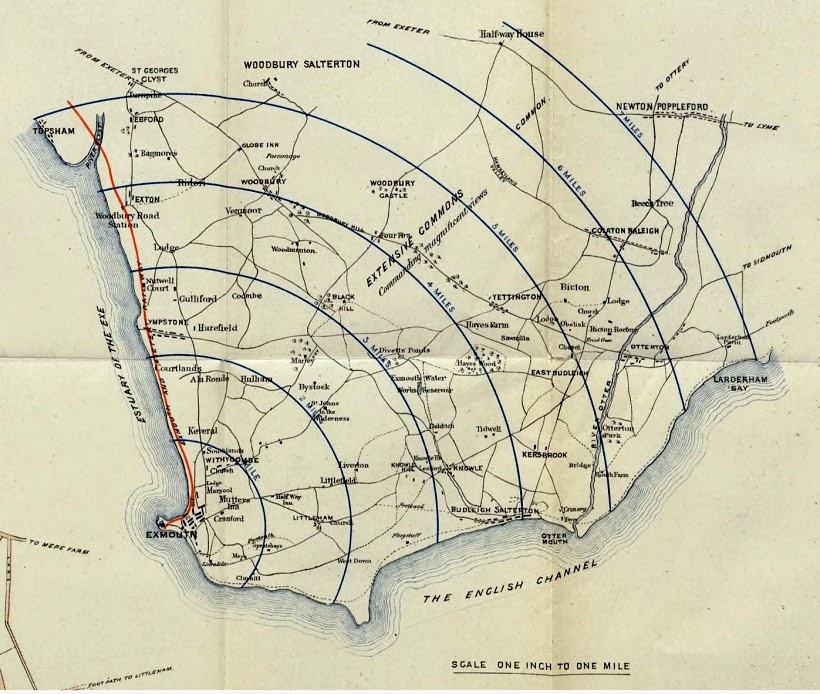 Here are the Bodleian links. Click View Online to view or download the PDFs, which the Bodleian has made available on a Creative Commons Attribution - NonCommercial - ShareAlike 2.0 UK: England & Wales (CC BY-NC-SA 2.0) licence. That is, you can share the files as long as the use is non-commercial and you attribute the original source.