An Episode at Blackgang Chine

A purge of 'out-takes' from a recent post series - see Blackgang Chine, March 2015 - finds this rather static romance story in an 1878 Tinsleys' Magazine, and a slight bibliographic puzzle relating to the authorship of two obscure 1870s novels.

An Episode at Blackgang Chine concerns the meeting between Amory (a very stiff bachelor of independent means who is paranoid about being hit on by impoverished widows) and a lady from his past, Maida (an improverished widow), when Amory is staying at the Blackgang Chine Hotel to recover his health.

Tinsleys' Magazine was something of an advertising wing of the Tinsley Brothers publishing firm, showcasing works and authors to be published by the Tinsleys. Its general catchment and business practices were a little more off-the-wall than many of the literary magazines of that era, sensational stuff such as How They Lynched Me: A Tale of the Far West sitting next to major names and titles; Thomas Hardy's A Pair of Blue Eyes first appeared serialised in Tinsleys'.

So, the story first. Skip if you want; the following bibliography bit is about its authorship, and that of a couple of related works.

AN EPISODE AT BLACKGANG CHINE.
By The Author Of  'Marley Castle,' 'Corrafin,' Etc.

Several weeks have gone by since that happy day; and I must add a line to say that, though still ailing and still under sentence of expatriation, my new-found happiness has already had a most favourable effect on my health; and banishment no longer has any terrors for me, as, before I enter on it, I am to exchange single for double blessedness.

And as the allegorically-named Amory and Maida disappear into the luminous future (luminous apart from his ominous recurring health breakdowns), on to the bibliographics ...

Sir Garnet Wolseley is  Field Marshal Garnet Joseph Wolseley, 1st Viscount Wolseley KP, GCB, OM, GCMG, VD, PC, who is historically notable as leader of the 1882 Nile Expedition to relieve General Gordon at Khartoum. Either this much-decorated Anglo-Irish military veteran was a closet romance writer, or he was fronting for a friend or relative. While continuing suspicion attached to Sir Garnet himself, the strongest candidate for authorship is his sister Matilda.


A novel edited by Sir Garnet Wolseley, entitled 'Marley Castle,' willl shortly be published by Messrs. Remington and Co. Various conjectures have been made as to its authorship. One seems to be the most likely and the most obvious.
- Variorum Notes, The Examiner (London, England), Saturday, July 14, 1877.
...
Week after week passes away, and "Marley Castle" continues to be a target for the cannons and penny pop-guns of criticism. In some quarters Sir Garnet Wolseley is referred to as the actual author of the book, an in others is burdened with undue responsibility as its nominal editor. I should like the critics in question to know that Sir Garnet never read a line of "Marley Castle" before it appeared in print. It is the work of a lady, a near relative of Sir Garnet's, whose publisher made it a sine qua non that the gallant soldier's name should appear on the title page. The result is known. Sir Garnet must be added to the already long list of those whose good nature has joined them to the company of martyrs.
- London gossip (quoting the Whitehall Review) Hampshire Telegraph and Sussex Chronicle etc (Portsmouth, England), Wednesday, October 10, 1877.
...
It seems a pity that Sir Garnet Wolseley should not have been a real, rather than a nominal editor of this novel, written by his sister and bearing his name upon its title-page; but we can trace very few signs of editorship throughout its pages.
- The Dublin University Magazine: A Literary and Philosophic Review, Volume 90, December 1877, page 761.
...
LORD WOLSELEY .... It will be news to most of you readers that this great soldier tried his hand at writing fiction. In the year 1877 appeared a novel entitled "Marley Castle," "edited" by Sir Garnet Wolseley, as he then was; but it was common talk that "editor " was a pious fiction for "author." In spite of his future fame, the book made no mark, and is not mentioned in his autobiography or in any life.
- AN OLD SOLDIER, Curragh, letter, The Irish Book Lover, Volume 4, 1913, page 174.
...
The two novels probably were written by an unidentified author, who may have been a friend of Sir Garnet Wolseley.
- A Guide to Irish Fiction, 1650-1900, Rolf Loeber, ‎Magda Stouthamer-Loeber, ‎Anne Mullin Burnham, Four Courts, 2006
...
Matilda Wolseley [one of Sir Garnet Wolseley's sisters] tried her hand at being a novelist, publishing Marley Castle: A Novel (1877) and Corafin [sic] (1878). The former appeared as 'edited' by Wolseley himself to his intense embarrassment as he considered it 'rubbish': : see SLCM [South Lanarkshire Council Museum], Wolseley Diaries, CAM.H.22. Entry for 8 Aug. 1877.
- footnote in Wolseley and Ashanti: the Asante war journal and correspondence of Major General Sir Garnet Wolseley 1873-1874, Viscount Garnet Wolseley Wolseley, Ian Frederick William Beckett, Army Records Society (Great Britain), History Press for the Army Records Society, 15 May 2009. 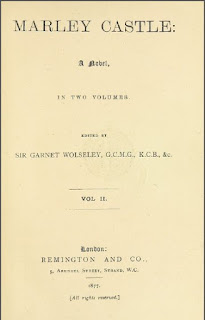 Marley Castle attracted extensive and hostile reviews. I guess reviewers were drawn to it initially by the high-profile and out-of-character name associated with it, and when they found it was poor stuff, they piled on - often compounded with the sexism of the time, the worst reviews tending to be from those who suspected it was written by a woman. The writing isn't bad in an illiterate sense: quite the opposite. It's far too consciously 'literate', peppered with attributed and unattributed quotations ...

... and with absurdly inflated turns of phrase, as noted by the Westminster Review's comments on Marley Castle:


... the penny-a-line style that pervades the book. Thus a silver spoon is called a "buccal ornament" (i. 3). How a spoon can be called an ornament of any kind we cannot imagine, still more how it can be called a "buccal ornament," which, if it means anything, means an ornament for the cheek. A savage might perhaps call .an ear-ring an "aural ornament," or his nose-ring a "nasal ornament, but even he would hardly call a spoon a "buccal ornament." In much the same strain whiskers are termed an "hirsute appendage" (ii. 98), whilst a wig is a "capillary attraction" (ii. 97), and a member of Parliament is "a fractional portion of the wisdom of Parliament" (ii. 102). This wretched would-be-witty style was first begun by Dickens, and has been followed by all his imitators who possess none of his genius and all of his faults. It has now become the property of penny-a-liners, provincial newspaper correspondents, and the writers in fifth-rate comic journals.
- Belles lettres, Westminster Review, [Vol. CVIIL No. CCXIV.]—New Series, Vol. LII. No. II, 187, page 561.


Major Vere, in succeeding to Marley Castle and part of the property thereunto appertaining, obtained a very goodly heritage. But as a rule Fortune only sells the favours she seems to bestow—so manifold are the drawbacks with which they are attended, and so high is the price we have oftentimes to pay for them. And this case was no exception to the rule; for the recipient of the favours in question, though he by no means undervalued them, felt that they had come too late so far as his power of enjoying them was concerned, and he proved that he did so by bidding adieu to all his fair possessions as soon as he possibly could, and going abroad.
- Marley Castle, vol 2., page 1.

Marley Castle chiefly concerns the wanderings of said Major Vere in pursuit of the love of his life, Blanche (who he doesn't know is already married, until he proposes). After Vere has wandered all around Europe, Blanche's husband conveniently dies of drink, and the lovers are happily united.

Corrafin, which got marginally better reviews, is a multi-threaded Irish novel following the fates of four gentleman officers in the same regiment in Limerick barracks. It comprises one central storyline about complications surrounding an arranged marriage, and a body of anecdote:

Sir Herbert Corry is told off to marry an heiress; of course, it being in a novel, he falls in love with her, and equally of course refuses to marry her; in fact, it is “Uncle's Will” over again … The remaining nine-tenths of the work are padding, relating the practical jokes played upon a miserable little creature [a young third officer] called Medge. These jokes are venerable for their antiquity, having been originally invented, we believe, by Adam to relieve the monotony of Eden.
- Vanity Fair, Volume 20, 1878, page 119.

Nevertheless, The Examiner thought distinctly well of it:


“Half-sunshine, half-tears,” is the motto on the title-page of ‘Corrafin,’ and it serves well to describe the contents of the two volumes. The sunshine is somewhat artificially mixed with the tears, there being but slight connexion between the serious main-plot of the story and the rollicking underplot and collateral incidents by which it is diversified, but the mixture is the reverse of unpleasant, the different ingredients being all excellent of their kind. Both the humour and the pathos of ‘Corrafin’are genuine. The writer undoubtedly has the peculiarly Irish faculty of making “the weeper laugh, the laughter weep.” We find ourselves often laughing heartily and grieving tenderly over the pages of ‘Corrafin’ than over those of many tales more artfully constructed. The two volumes, though the title implies a unity, are really composed of three separate stories and a choice selection of racy Irish anecdotes, but we readily forgive the author for treating us to so simple an alternation of comic chapters in consideration of her rare sense of fun and her delicate handling of painful themes. That the writer is a lady, though she shelters herself under the ambiguous gender of the word “author,” seems to be indicated by many little circumstances. Her first novel, ‘Marley Castle,’ which, it may be remembered, was edited by Sir Garnet Wolseley, was rather overloaded with quotations and similitudes from the classics. There is none of this misplaced learning in her present venture, which is light and interesting from the first page to the last.
- Literature, The Examiner (London, England), Saturday, June 15, 1878.

However, the Pall Mall Gazette reviewer, who compared it unfavourably to the works of Charles Lever, wasn't keen ...


... more or less uninteresting throughout … viewed as a whole, it is impossible to discover anything in “Corrafin” to raise it above the level of indifferent novels.
- New books and new editions, The Pall Mall Gazette (London, England), Tuesday, July 23, 1878.

.... and nor was FM Owen (the poet Mrs Francis Mary Owen, regular reviewer for the Academy):

The author of Corrafin, if asked whether he could write a novel, would assuredly have answered as the Frenchman did about hunting, "I do not know, but I will try." He has apparently made up his mind that there shall be a book, and that it shall be an Irish one. So he proceeds to write down everything funny that he can think of, not considering it necessary to arrange his plot or to give any sequence to his incidents. The mirth grows uproarious sometimes, and is not always in the best taste, and the pathos is seldom very pathetic, but two volumes are at last filled with the most commonplace jokes of barrack-rooms, a little hunting and lovemaking, and a good many moral reflections.
- FM Owen, Corrafin, New novels, The Academy and Literature, Volume 14, Nov. 2, 1878, pages 425-6.

Still, in the light of the Examiner review, it looks worth at least a glance. It has, judging by a few direct quotes in that review, some vivid description and weird incident, as when the lead character, Sir Herbert, is introduced to Laurie Harden, a lady brought up in India he is expected to marry, and finds she has caught jaundice during the voyage home and looks like

... a little ghost—and a very yellow ghost, too, for her face and hands were dyed orange colour, and in addition to that she was thin to emaciation; all her features were pinched and drawn, and her lips were perfectly purple.” … “Good Heavens, is that what they want me to marry?”