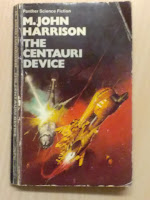 Well, there's always a plus side. I'm in hospital again, and a bit stuck for reading. But among the books in Richard's Room, the little family/chillout room next to the Yeo Ward in Exeter's RD&E - amid Cookson, Cussler, King, Cornell, Helen Fielding ... aaargh! ... I did find just one good book, one I haven't read for around 35 years, M. John Harrison's classic SF novel The Centauri Device.

This is an iconic novel that has a complex mix of many flavours. The cover blurb unfortunately wades straight in with GALACTIC ARMAGEDDON and "the most destructive and mysterious weapon ever made", but this is a cartoon-y summary that completely undersells the complexity of theme. The cover is particularly wrong to compare it to the naff outpourings of E.E. 'Doc' Smith and A.E. Van Vogt.
At a broad level, with its standard tropes of galactic trade, travel, conflict and battle, The Centauri Device is bound to be classed as 'Space Opera'. But it also been viewed as proto-cyberpunk, with its general atmosphere of high-tech combined with low-life (its antihero John Truck, the down-at-heel loser of a space captain in combat jacket and leather hat, is as low-life as you get). It has elements of near-future dystopian SF, with still-relevant present-day politics writ large: the Earth is divided into two power blocs - the IWG (Israeli World Government) and the UASR (Union of Arab Socialist Republics) - which are skirmishing for control of the rest of the galaxy. And there's a general 60s-70s 'New Wave SF' / 'Beat' sensibility to the setting, with a focus on countercultural characters, artists and musicians. There's so much to the mix.
Truck's central importance to the story is that his mother was a pure-bred Centauran, one of a diaspora of many similar low-lifers from a people (human, but not lately from Earth) whose culture had been destroyed in the Centauri Genocide two centuries before the setting of the book.. The Centaurans had one cosmic asset: the unused Centauri Device, an object known only to have immense power - various factions have mythologized it as a bomb, a propaganda broadcaster, even God.
This adds a further level to the book: that it's a competitive Grail Quest. And Truck finds himself dragged along as a follower of that quest. In this there are quite strong thematic similarities to Samuel R Delany's 1968 Nova, which I've mentioned previously. In that, even though the object of the quest is well-known at a mundane level - its "Illyrion" is an unspecified mix of superheavy elements - it's also "something else" ... "many things to many men".
Back to The Centauri Device. The catch is that only a Centauran can activate it. It detects as characteristically Earth-human the urge to chase Grails, and furthermore even to specify what 'boon' the seeker might want. Truck lacks that faculty; and while that evidently accounts for his destiny as a loser with no great visions, it's ironically what also identifies him as a Centauran.