Blossoms from a Japanese Garden

Blossoms from a Japanese Garden by Mary Fenollosa: cover image found during a quick camera purge. 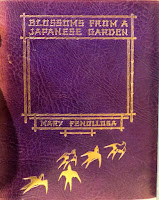 One of our rituals of Isle of Wight visits is to wander from the top end of Ryde (High Street) down to the Pier via the charity shops and a tea shop or two, and last time I spotted this pretty little book: one not enough in my territory to buy, but its content (Japanese-themed children's verse) and its beautiful and subtle colour plates struck me for their very authentically Japanese flavour.

It turns out to be quite an unusual title to turn up in a Ryde charity shop, as it's a vintage book - Blossoms from a Japanese Garden: a book of child-verses - by the American novelist and poet Mary McNeil Fenollosa (née Scott, 1865-1954), who did indeed know her field for this. As the Encyclopedia of Alabama entry explains, at the Boston Museum of Fine Arts she worked with (and later married) the eminent Asian art scholar Ernest Fenollosa, whose Japanese connections included his appointment as Imperial Fine Arts Commissioner for the Emperor Meiji. She also wrote novels as "Sidney McCall", though according to the New York Times Boston Notes (15th September, 1906) didn't identify as the author until the third, The Dragon Painter.

Here's a gallery from the US first edition of Blossoms from a Japanese Garden at the Internet Archive. It looks as if a previous owner must have picked the cover panel off the book I saw in Ryde (possibly the Heinemann edition - somehow I deleted my EverNote note without synching it).

And not forgetting the Ryde tea-shop (actually, Olivo's Italian Restaurant, which I recommend):