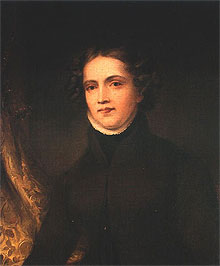 If you didn't see it, you have just under a week to catch on BBC iPlayer yesterday's 60-minute documentary Revealing Anne Lister, "born in Halifax in 1791 ... A Yorkshire landowner, she was a polymath, autodidact and traveller" whose 4 million word encoded diary is an account of her life as "the first modern lesbian".

The BBC TV Blog has an interesting account by the scriptwriter Jane English, Anne Lister's diaries: From page to screen, on the adaptation process for the associated 90-minute dramatisation, The Secret Diaries of Miss Anne Lister. Personally I thought it over-prettified her character. According to the documentary, her sexual attitudes were fairly predatory; and her social attitudes, despite some progressive aspects, were largely those of a Tory landowning snob (e.g. anti- trade unions 1). But she's a historical character I admire a lot for her sheer self-awareness, energy and wide-ranging intelligence. The drama focused on the romantic aspects of her life at the expense of her intellectual and business achievements, not to mention fast-forwarding in the credits over the five-year Grand Tour on which she became the first woman to climb Mont Perdu in the Pyrenees, and the first "official" ascender of the Vignemale.

However, a deal of her intellectual side was covered in the documentary, which also went into the remarkable posthumous saga of her diaries, which were repeatedly discovery and reburied until their publication in 1988 by Virago as I Know My Own Heart: The Diaries of Anne Lister 1791–1840 (edited by Helena Whitebread, who has produced a second compilation, No Priest but Love). The West Yorkshire Archive Service Anne Lister microsite has a a number of transcripts from her journal as well as the key to her diary code, and The Borthwick Institute for Archives has some archival material: see The Story of Anne Lister.

1. See Anne Lister's diary September 1832, in which tells of threatening to dismiss an employee if he attends union meetings.
- Ray
at 07:16