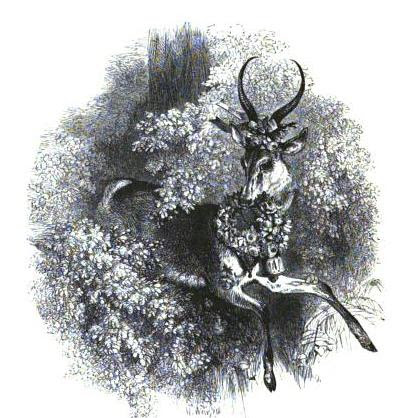 Illustration for Thomas Moore's The Gazelle.

Further to Bad luck with gazelles, Monica just drew my attention to a reference in Agatha Christie's 1936 Poirot mystery, Cards on the Table:


"May be going abroad," said the Sergeant.

Though unacquainted with Lord Byron's famous poem, "I never loved a dear gazelle," etc., its sentiments were at that moment hers. She thought to herself:

"Funny how all the really attractive ones never come to anything. Oh, well, there's always Fred."

As Monica suspected, it is a misattribution. The much-parodied "dear gazelle" comes from The Fire-Worshippers , part of the epic Lalla Rookh by the 19th century Irish poet Thomas Moore (on quotation websites - ThinkExist, for example - it's commonly misattributed to Thomas More). Christie presumably mistook it for Byron's The Wild Gazelle ...


The wild Gazelle on Judah's hills
Exulting yet may bound,
And drink from all the living rills
That gush on holy ground—
Its airy step and glorious eye
May glance in tameless transport by—

opening stanza from The Wild Gazelle, from Byron's Hebrew Melodies.

... or his description of Leila in The Giaour:


Her eye's dark charm 'twere vain to tell,
But gaze on that of the gazelle,
It will assist thy fancy well;
As large, as languishingly dark,
But soul beamed forth in every spark
That darted from beneath the lid,
Bright as the jewel of Giamschid. 1

From the Song of Solomon onward, references to the gazelle in poetry are naturally frequent in works from countries where the gazelle is indigenous, but there a few other sightings of gazelles elsewhere. Apart from the reference in The Fire-Worshippers, Thomas Moore wrote a standalone poem about the "dear gazelle": see page 80 of the 1858 Poetry and Pictures from Thomas Moore. In the poem, the narrator meets (it happens all the time) a gazelle decorated by his lady love.


DOST thou not hear the silver bell,
Through yonder lime-trees ringing?
'Tis my lady's light gazelle.
To me her love thoughts bringing, —
All the while that silver bell
Around his dark neck ringing.

There's The Gazelle of the Menagerie in Hannah Flagg Gould's 1850 anthology New Poems (Gould herself was on the receiving end of misattribution, when her best-known poem, A Name in the Sand, was variously credited to Charles Dickens and the journalist George D Prentice 2). Gazelle is the name of the Native American heroine of Isaac B Rich's 1866 romantic poem set against the American Civil War, Gazelle, A True Tale of the Great Rebellion. And there's Rilke's Die Gazelle (The Gazelle):

Enchanted being: how can the harmony of two
chosen words ever achieve the rhyme,
as with a sign, that comes and goes in you.
Out of your brow rise leaf and lyre,

and everything yours already runs as metaphor
through love songs, the words of which, soft
as rose petals, for the one who no longer reads,
laid upon the eyes, which he closes
so that he may see you: carried about as if
each slender leg were charged with leaps,
not to be fired as long as the neck

holds the head high in listening: as when, while
bathing in a dark forest, the bather interrupts herself:
the forest pool still reflected in her turning face.

The Gazelle was one of Rilke's particularly acclaimed poems dating from 1902: The Gazelle, The Swan and The Panther. The last is especially powerful, the one used by "Leonard L" (as reported in Oliver Sacks' Awakenings ) to express his experience of profound Parkinsonism.

There appear to be conflicting views about how the word "gazelle" (which derives from its Arabic name ghazal) is connected with the name of the Middle Eastern lyrical verse form, the ghazal. It's commonly stated that "ghazal" alludes to the mortal cry of the gazelle, but this may well be a folk etymology. The Encyclopedia of Arabic literature, Volume 1 (see page 249) says "Etymologically the term is associated with the verb ghazila, 'to spin', and, probably by contamination, with the gazelle (ghazal), to which the beloved is often compared" but a critique of this book in Bulletin of the School of Oriental and African Studies, 1999, says "While ghazal is 'Etymologically . . . associated with the verb ghazila' the verb ghazila does not mean 'to spin', but 'to talk and act in an amatory and enticing manner, with a woman, or with women'". The precise origin is probably lost in time.

1. A reference explained here. Byron originally wrote "ruby of Giamschid", but a friend suggested the change as "the comparison of his heroine's eye to a ruby might unluckily call up the idea of its being bloodshot".
2 See page 303, The Dickensian, 1908.