In search of the ochidore 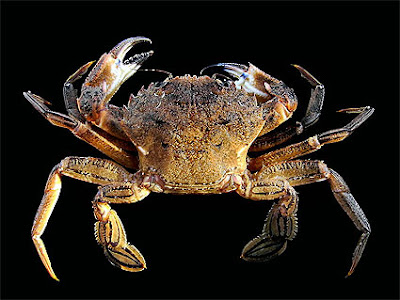 Velvet Crab, Necora puber: On board of RV Belgica from the southern North Sea. Licensed under the Creative Commons Attribution-Share Alike 2.5 Generic license.

The contestant who got it wrong can hardly be blamed, as the word is deeply obscure ...

... and, according to this account at The Awl, "elicited horrified gasps" at the revelation that its root was unknown (National Spelling Bee contestants are allowed to ask about word derivations to get a clue to the spelling). Furthermore the definition comes from a single citation in literature, if not in the whole of the English language, telling of a prank played on an old schoolmaster during a maritime pageant:


And clapping both hands to the back of his neck, the schoolmaster began dancing frantically about, while his boys broke out tittering, "O! the ochidore! look to the blue ochidore! Who've put ochidore to maister's poll!"

It was too true: neatly inserted, as he stooped forward, between his neck and his collar, was a large live shore-crab, holding on tight with both hands.

It's apparently a Devon dialect word. In 1901, AL Mayhew enquired, apparently without response, to Notes and Queries ...


"Ochidore."—This word occurs with the meaning "shore-crab" in Kingsley's ' Westward Ho !' chap. ii. p. 44. I can find no instance of its occurrence elsewhere. I should be glad if any of your readers would kindly tell me whether " ochidore " is a Devon word. Query etymology ? A. L. Mayhew. Oxford.

... and in 1935, an article on dialect words for marine life - Devonshire Fish Names - elaborated the definition:

- pages 427/432, Report and Transactions of the Devonshire Association for the Advancement of Science, Literature and Art, Volumes 67-68, 1935

I haven't been able to hack the Google Books snippet view to find whether there's any explanation of the identification as the Velvet Crab - and anyway the Kingsley passage gives no reason to think that an ochidore is anything but a generic name for crab - but I assume it's to do with the "blue" description. The Velvet Crab (pictured above) does have blue-black tips to its claws, but it doesn't seem sufficiently blue for schoolboys to exclaim "Look to the blue ochidore". Blue crabs do exist - the blue crab (Callinectes sapidus) and the blue swimmer crab (Portunus pelagicus) - but neither of them are native to British waters. Perhaps the one in Westward Ho! was an escapee; they very rarely turn up after transport in ships' ballast (see the recent news item Rare Blue Swimmer Crab discovered in Cornwall).

As to the word itself, the trail on "ochidore" has gone very cold.

Addendum: Felix Grant adds this detail (I should have had the brain to click on the OED's etymology tab):


[Origin unknown.
Apparently used only by Kingsley (see quot. 1901), and probably invented by him; compare the following:
1901 T. L. SIMKIN MS Let. 10 Dec. (O.E.D. Archive), It does not appear whence Kingsley got this name. One old fisherman, still alive at Clovelly, remembers that Kingsley so called the Spider-crab Maya Squinado (not the Shore-crab): but he never heard any one else do so.]

I admit I don't quite understand the point of this anecdote in the OED. If the implication is that Kingsley made up terminology, this isn't a data point. The spider crab is called Maja Squinado, so the story merely means the old fisherman didn't know the Latin name, not that Kingsley was unreliable. However, the absence of "ochidore" elsewhere - for instance, in the good number of 19th century works on and in Devon dialect - is a trifle suspicious.