A book on my search list: Salutation Inn. A novel (Richard Gray, pub. Michael Joseph, 1941). I stumbled across some reviews, and found from one that the novel's setting is actually Topsham's Salutation Inn. Here's one:


Although it is a first novel, "Salutation Inn" is a powerful story that shows its unknown author as a gifted writer. It is a psychological study that depends largely on atmosphere for its success. The author uses an old inn in a lonely marshland English village as a retreat from a murderer for whom the police are hunting. At this "Salutation Inn," Inigo Orton, a man of strange passions, who calls himself Mr. Crawley, finds an understanding, appreciative soul in the barmaid, and a welcome from an eccentric old woman. But he can find no peace of mind, and. inevitably, tragedy results when his identity is discovered. This is a decidedly unusual book, with a pervading and inescapable atmosphere that only artistry and true feeling could produce.
- The Advertiser (Adelaide), 20 September 1941

It looks strange enough to be a good yarn, and I'd love to read it. The Catalog of Copyright Entries for 1941 identifies "Richard Gray" as Jasper Salwey, a sufficiently unusual name to be most likely the artist and architect Jasper Philip Salwey (1884-1956).

Update: see Salutation Inn revisited for more on this book.

The Salutation Inn in Topsham has been closed as a pub for around two years, but I was delighted to be given a tour today by the new owner Ed Williams-Hawkes, who is renovating it as a top-of-the-range hotel. I'd previously only seen the ground floor and a handful of the first floor rooms, but it's an amazing 26-room labyrinth over three floors, and architecturally very interesting underneath the many (often hamfisted) modifications over four centuries.


Reverting to Topsham at the time of its prosperity, a further development of the vernacular is to be seen in the Salutation Inn, famous as an hostelry for travellers by road from North to South Devon as well as a rest-house for those travelling by sea to the Continent. This building which, in its external treatment as in the interior details of the Assembly Room and other apartments, follows the mode of 1720, marks another and later stage of the formative development. By this time the Dutch influence had become completely anglicised. The main feature of the design is the prominence given to the Assembly Room, which is placed over the coach entrance and in former days was supported on two timber Doric columns of proved substance. The original stone pedestals are in situ, but the corpulent supports have in the last twenty years been replaced by modern brick piers which lack grace and character, apart from their efficiency as structural supports.
- Regional Architecture of the West of England, Sir Albert Edward Richardson, Charles Lovett Gill, 1924.


It's quite gothic in places, and in the attic there's a mummified cat (above) such as are found occasionally in old buildings. It has been nicknamed "Tonic", because it has a gin trap on one foot. It's unclear if this is how it died, or if this was added as a scary detail posthumously.

The showpiece of the Salutation, however, has to be the Assembly Room that overhangs the frontage, and is a prominent feature of Topsham's Fore Street.  The Salutation must have seen some memorable junkets. As I've mentioned before, in the late 1700s the Salutation was the headquarters for Colonel Robert Hall's Devonshire and Cornwall Fencibles during the War of the First Coalition (see Samuel Carter Hall visits Topsham); and the Assembly Room was the venue for the upper-crust booze-up ...

The officers of the navy and army, resident at Topsham, and the Gentlemen of the town, repaired to the Assembly Room, at the Salutation Inn, to drink the King's health; and the Rev. Mr. Carrington being unanimously requested to take the chair, and having complied in a very obliging and polite manner, many loyal toasts were drank, and many excellent songs were sung, particularly one printed and dispersed amongst the company upon the occasion.


... following the hanging of Tom Paine in effigy in Topsham in 1793 (see Tom Paine hanged in Topsham).


See Exeter Memories - The Salutation Hotel - Exe Street, Topsham - for a bit of the history.  A skim of the British Library 19th Century Newspapers archive finds the Salutation had extremely varied use in the 19th centuries: for balls, property auctions, society dinners, coroner's inquests and even as unofficial mortuary for people found drowned in the Exe. 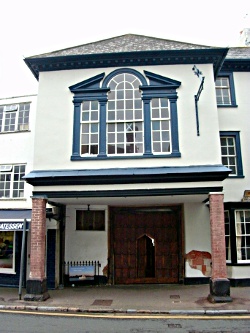 Renovation of the frontage is now visible, involving restoration to historically authentic appearance (slate blue, not black, paint; exposed wood on the gate; and the paint removed from the brick pillars).