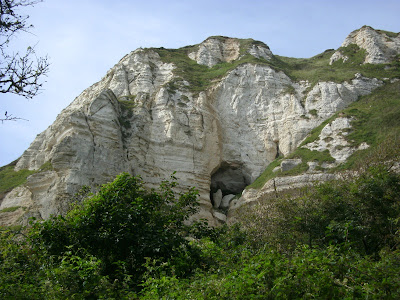 A spot of regional geography. The Express & Echo carried a story yesterday (Man rescued after being taken ill in remote cave while looking for bats, E&E 28th February 2011) concerning a mishap at "Hooken Cave" at the Hooken Undercliff, near Beer.

I've never seen the place called Hooken Cave before; this particular hole in the ground, nicely illustrated here at Wikimedia, is called the Beer Stone Adit or Hooken Adit or Connett's Hole (I've no idea who Connett is/was). It's not technically a cave but a mine entrance formerly used to extract Beer Stone, the local variety of hard chalk. Contrary to some descriptions, as far as I can tell there's no evidence of it connecting to the well-known Beer Quarry Caves a mile inland. A number of accounts, such as Alfred John Jukes-Browne's 1903 The Cretaceous rocks of Britain, mentions that its specific purpose was to extract rock for transport by sea; at least when Jukes-Browne was writing, dressed blocks of stone were still recognisable "lying on the slope below, alongside the pathway leading down to the shore".

There are further geological details at the Beer and Seaton page for Ian West's excellent series of south coast field guides. It notes that the adit entrance is not to be messed with by non-climbers.

Addendum: I've just found a majorly nice image in an Internet Archive copy of Arthur William Clayden's 1906 The History of Devonshire Scenery; an essay in geographical evolution: see the plate (which is zoomable) opposite page 137 of Hooken Cliff and Under Hooken. Connett's Hole is clearly visible, but what's chiefly interesting is the lack of undergrowth - Clayden calls the terrain of Under Hooken a "greensward".  The difference is probably down to the same factors that have made the Lyme Regis Undercliff heavily overgrown: change in land use, with the area no longer grazed by sheep and rabbits.

See Hooken and Beer for our visit in September 2012 revisit.