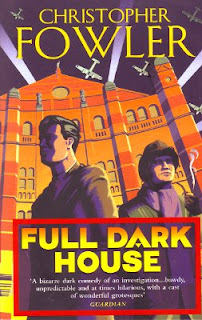 Euw. I just spent most of the day in bed coughing, courtesy of a bug I picked up mid-week. But it gave me a chance to read Christopher Fowler's Full Dark House.

I mentioned Fowler's "Bryant & May" detective series in 2010, when I read his 2008 The Victoria Vanishes. Possibly I dropped into the series at the wrong point (i.e. its then final book), but I've remedied that by reading the first, which Felix kindly sent me.

Full Dark House starts with the rather bold device of introducing an elderly duo of London detectives - Bryant and May - via killing one of them off in a bomb explosion. Then the story proceeds by intercutting the surviving partner's investigation with a flashback to their first case together, a series of gruesome murders (apparently themed serial murder based on the Greek muses) in the Palace Theatre in November 1940, during the London Blitz.

Police procedural is a staple of fiction, but Fowler's angle is that Bryant & May work for the bizarre and underfunded "PCU" (Peculiar Crimes Unit) which - with the exception of the dapper and stoical May - is largely staffed by misfits from other departments. Bryant, heading it, is a "tortoise-like" badly-dressed hypochondriac who sees no problem in consulting mediums as an aid to the investigation of crimes such as the "Leicester Square Vampire". Again, the idea of mismatched detective partners is pretty staple, but Bryant and May are extremely likeable, and Full Dark House is populated with similarly sympathetic grotesques.

The plot is, essentially, an extended 'contrafactum' on The Phantom of the Opera, and the book skilfully portrays the gothic atmosphere, and the relationships and conflicts within a theatre company producing a revival of Offenbach's satirical Orphée aux enfers in what proves to be a controversial adaptation: the faux-nude costumes risk breaching the Lord Chamberlain's then censorship of theatrical nudity. Fowler neatly slots this fictional production into the theatre's real timeline - a gap between summer 1940, when a revival run of Chu Chin Chow ceased due to bombing, and summer 1941, when it restarted. Overall the novel is a vigorous and historically accurate take on Blitz-era London - darkly comic without being the least flippant about the horror of the time - and Fowler's general fascination with the little-known corners and 'deeps' of London shines through (for example, I'd never heard of The Other St Paul’s on Vauxhall Bridge) - but without the book turning into a "research dump" of what the author found out. I highly recommend it.

The only downside is that this is a book where (at least, if you're me) you constantly want to Google the details. The Palace Theatre, of course, still exists, and deserves to be considered in its own right a character in Full Dark House. As is easily findable online, it started out in 1891 as Richard D'Oyly Carte's Royal English Opera House, but rapidly failed in that role (in part due to its initial run of Sullivan's lacklustre Ivanhoe) and became The Palace Theatre of Varieties in 1892. Ir's a building of the astonishing complexity required to contain all the machinery of top-of-the-range stage productions. The arthurlloyd.co.uk Musical Hall and Theatre site has a special feature - The Royal English Opera House - Now the Palace Theatre - with photos, contemporary sketches, and even floor plans of its many levels.

As I mentioned back in 2010, there's more of interest at Christopher Fowler's website. His Independent series on forgotten authors is also worth checking out: the Neglected Books site has usefully collated archive links: “Invisible Ink".