The King of the Cats

Following on from the story of the cat funeral (attributed by Jean Cocteau to Keats) in MK Joseph's poem The Rosy Cats of Doctor Paracelsus ...

It's a very good yarn, which Cocteau retold in his 1969 The Hand of a Stranger: (Journal d'un inconnu). Admittedly, this must get some kind of prize for the retelling most embroidered with irrelevant waffle about the angsts of the storyteller.


On a Cat Story
To be not marvelled at, but believed

As far as I know, Keats' cat story has never been written. It has been passed down by word of mouth, changing as it goes. There are a number of versions about, but the mood is always the same. A mood so subtle that I wonder if that is not why the story better fits speech, with its leisureliness, than the pen, which is impatient.

These are the facts : Keats was to go to the village of F. to lunch with a friend who was the parson there. He had to cross a forest. On horseback, he lost his way in it. Dusk made the labyrinth inescapable. Tying his horse to a tree, he decided to wait for daybreak, and try to find a charcoal-burner's hut where he might shelter overnight. While he was wandering round, afraid to go too far out of sight of his horse, and taking care to blaze a trail wherever he went, he noticed a light. He made his way towards that light. It came from a sort of ruin not mentioned by any guide book, that of an ancient amphitheatre, a Coliseum, a confusion of arches, steps, tumbled stone, collapsed walls, gaps, brambles. The light, which was very peculiar, quivered and lit up the dead amphitheatre. Keats went close up, slipped through a gap past a pillar, and peeped.

What he saw pinned him there with stupefaction and terror. The auditorium was occupied by hundreds of cats, side by side, like the crowd round a Spanish arena, they were milling about everywhere, miaowing at the top of their voices. Suddenly he caught the sound of miniature trumpets, and the cats were motionless at once, their phosphorescent eyes turned to the right, from where came the flickering confusion of light and shadow. The light came from torches, carried by fifty jackbooted cats, heading a procession of other cats, magnificently clad, with cat pages and heralds trumpeting, cats carrying banners and cat standard-bearers.

The procession filed right across the arena and began to wind back, when there appeared four white and four black cats, with cocked hats and swords, they too, just like the others strutting on their hind legs. These four were carrying on their shoulders a little coffin on which lay a small golden crown. Behind this came more cats, two by two, bearing cushions on which were pinned orders, the diamonds of which sparkled in the light of the torches and flashed in the moonshine. The procession wound up with drums. Keats told himself that he must be dreaming, he had fallen asleep on horseback and this was a dream. But dreams are one thing, reality another. He was not dreaming and he knew he was not. He was lost by night in a forest, he was the witness of a rite of which no man should have seen anything, and he was afraid. The moment his presence was discovered that crowd of cats would rush out of the amphitheatre and tear him in pieces with their claws. The heralds trumpeted, the standards fluttered, the coffin was borne, all in a silence made painful by those arrogant little trumpets. After one turn of the arena, the whole procession moved away. The trumpets died down. The lights were extinguished The crowd of cats left the tiers of the amphitheatre. Many of them leapt out through the breach in the wall into which Keats now made every effort to efface himself. The ruin became a ruin again, with only the moonlight to occupy it.

It was now that a much more dangerous idea than the scene he had witnessed came to Keats. It was that he would not be believed. This was a story he would never be able to tell. It would be classified as a poet's falsehood. Now, Keats knew that poets do not tell lies. They bear witness. [And he knew] that it is believed that they do lie. And he became frantic, at the thought a secret like this would remain his property, that he would never be able to relieve himself of it, sharing it with other men. A catafalque of loneliness.

Shaking himself, he went back to his horse. resolved to leave the forest, whatever it cost him. He then succeeded in reaching the parsonage, where he was no longer expected.

The parson was a very cultivated man. Keats had great respect for him, considering him, indeed, competent to understand his poems. He told his story, but without referring to the amphitheatre of cats. The parson had been in bed, and had got up again. The parson's valet was asleep. The parson laid a meal for Keats. Keats ate in silence. The parson was astonished to find him so distracted, and asked if he were not feeling unwell. Keats replied that he was not, but admitted that he was under the influence of a worry, the cause of which he was unable to tell. The parson gave him a friendly shake and said he certainly must explain what he meant. Oysterlike, Keats wriggled, but in the end the parson got him to give way, for once his guest had admitted that his anxiety was he would not be believed, the parson promised to believe him. Keats was not satisfied with a mere promise, but made the parson swear over the Bible. This however the parson could not do. But he did declare that his promise as a friend was really quite as good as the oath of a priest.

"I am all ears," he said, and lay back in his armchair, smoking his pipe.

Keats was about to tell, when he thought better of it. Fear overcame him again. The parson, now very interested, had to let him have his way and say nothing, in order to free his tongue. But at last Keats closed his eyes and told the story. The parson listened in the gloom, the window open on the stars, the fire dying down. Keats described the ruin, the strange gathering and the strange happening. From time to time, he opened his eyes, to shoot a glance at the parson ...
... section unfindable
Then it happened, just as sudden as a clap of thunder, without either Keats or the parson really grasping what was taking place. Keats had got to the procession, the torches, the trumpets, the pennants, the drums, and was describing the costumes, cocked-hats and high-boots. "Four white cats," he said, "and four black cats, were carrying a coffin on their shoulders. On the coffin lay a golden crown."

He had scarcely got these words off his lips when the cat which was sleeping in front of the fire arched its back. Its hair stood on end. "But that means I am now the king of the cats," it cried out in a human voice, and leapt out of the window.

I haven't been able to track it to Keats - this seems to be an invention or mistake on the part of Cocteau (perhaps he was thinking of the remark by WB Yeats on Swinburne's death). But Mary Shelley repeated in her 1824 On Ghosts this version ...


A gentleman journeying towards the house of a friend, who lived on the skirts of an extensive forest, in the east of Germany, lost his way. He wandered for some time among the trees, when he saw a light at a distance. On approaching it he was surprised to observe that it proceeded from the interior of a ruined monastery. Before he knocked at the gate he thought it proper to look through the window. He saw a number of cats assembled round a small grave, four of whom were at that moment letting down a coffin with a crown upon it. The gentleman startled at this unusual sight, and, imagining that he had arrived at the retreats of fiends or witches, mounted his horse and rode away with the utmost precipitation. He arrived at his friend's house at a late hour, who sate up waiting for him. On his arrival his friend questioned him as to the cause of the traces of agitation visible in his face. He began to recount his adventures after much hesitation, knowing that it was scarcely possible that his friend should give faith to his relation. No sooner had he mentioned the coffin with the crown upon it, than his friend's cat, who seemed to have been lying asleep before the fire, leaped up, crying out, 'Then I am king of the cats;' and then scrambled up the chimney, and was never seen more.

... by Matthew G Lewis. who told it to the Shelleys. It appears as an English fairy tale - The King o' the Cats - but, interestingly, one often collected many decades after these literary sources. However, it appears many times in 19th century publications. There's an extremely erudite verse retelling in The Mouser-Monarchy, a piece by John Hamilton-Reynolds in The New Monthly Magazine, Volume 75, Part 3, 1845. Fraser's Magazine in 1837 has a verse retelling "narrated by Washington Irving as having been told by Sir Walter Scott to him" (here). It's also in the 1836 anonymous collection Poems on Several Occasions, from 1793 to 1816 (page 41), and also in the letters of Lord Lyttleton (see Letters of the late Lord Lyttelton, Volumes 1-2, 1785, pp 35-36). And it appears in folklore versions: Notes and Queries, for Dec 15th 1860, mentions the variant story about someone being told by a cat, "Tell Dildrum [that] Doldrum's dead". Stephen Vincent Benét's 1937 short fantasy The King of the Cats is based on the same story. 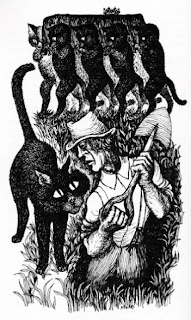 Addendum, 31 Jan 2013: I'm not sure now I missed this one first time round, but David Platt of Small Finds from the Spoilheap kindly sent me a scan and pointer to Joseph Jacobs' version The King o' the Cats (from his 1894 More English Fairy Tales, Project Gutenberg, E-Text No. 14241).