Ventnor - good for lungs and plants

We went to Ventnor again on Friday 25th, a very hot day.  By coincidence, after just mentioning the "New Humorists" of the late Victorian period, I just ran into this piece by one of them, Israel Zangwill:

I did not get to Ventnor without a struggle. Everybody that I met held up hands of horror. "What! Going to Ventnor? You will be roasted before your time." My friends grieved, my very publishers wrung their hands, my newsvendor took me aside and besought me to live on a high hill. Yet through the whole of August I sat coolly writing on a low terrace. There is a superstition about Ventnor, and none of the people who talk glibly about its temperature have ever been there. But I think I have discovered the origin of the great Ventnor myth. The place is a winter resort of consumptives; and Mr. Frederick Greenwood, who was the chief charm of Ventnor, told me that you may take coffee on your lawn in November. The town, then, is warm in winter. The popular mind, with its hasty logic, thinks that this is tantamount to saying it is broiling hot in summer. I fancy there is a similar fiction about Bournemouth. But as a rule the British climate pays no heed to guide-books. By the natives, Ventnor, though as beautiful as a little Italian town, seems to be regarded as a good place to go away from, for every other man keeps a coaching establishment (I don't mean a school), and you cannot walk two yards without being accosted by a tout, who resents your walking the next two. Its regatta is a puerile affair, its own boating crews going off by preference to rival regattas. But in illuminations it comes out far better than Cowes, whose loyal inhabitants throw all the burden of fireworks upon the royal and other yachts anchored in the bay. And besides, Ventnor has a carnival, which I saw in the shop-windows in the shape of comic masks.

Bonchurch, the suburb of Ventnor, which plumes itself upon a very artificial pond, furnished in the best style with sycamores, Scotch firs, elms and swans, is more interesting for containing the old churchyard by the sea which received the bones of John Sterling and inspired the best poem of Philip Bourke Marston:--

Do they hear, through the glad April weather,
The green grasses waving above them?
Do they think there are none left to love them,
They have lain for so long there together?
Do they hear the note of the cuckoo,
The cry of gulls on the wing,
The laughter of winds and waters,
The feet of the dancing Spring?

I was married in Ventnor. At least so I gather from the local newspapers, in whose visitors' lists there figures the entry, "Mr. and Mrs. Zangwill." I do not care to correct it, because, the lady being my mother, it is perfectly accurate and leads to charming misconceptions. "There, that's he," loudly whispered a young man, nudging his sweetheart, "and there's his wife with him." "That! why, she looks old enough to be his mother," replied the young lady. "Ah!" said her lover, with an air of conscious virtue and a better bargain, "they're awfully mercenary, these literary chaps." The reverse of this happened to a young friend of mine. He married an old lady who possessed a very large fortune. During the honeymoon his solicitous attentions to her excited the admiration of another old lady, who passed her life in a Bath-chair. "Dear me!" she thought: "how delightful in these degenerate days to see a young man so attentive to his mother!" and, dying soon after, left him another large fortune.

(The book is a collection of pieces that originally appeared in Zangwill's column in Pall Mall magazine; and this piece comes from the travel writing section Here, There, and Somewhere Else: Philosophic Excursions. See the previous post - Sharland grave, Bonchurch Old Church - for PBM's poem).

Personally, I've also found Ventnor's climate to differ from its general reputation. Its sheltered south-facing cliffside aspect undoubtedly makes it mild in general, but being on the English Channel, it gets its share of blustery days, and I've found it pretty chilly and bleak off-season. The east winds can be especially cold. Nevertheless, the overall picture - one studied in detail in James W Williamson's 1884 Ventnor and the Undercliff in Chronic Pulmonary Diseases (Internet Archive ventnorandunder00willgoog) - is of a climate beneficial for pulmonary cases, and this is what led to the foundation by Arthur Hill Hassall of a sanatorium, the National Cottage Hospital for Consumption and Diseases of the Chest, about a mile west of Ventnor. 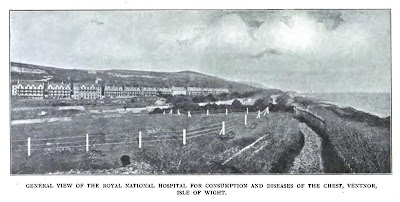 Hassall's an interesting character. Despite being consumptive himself, and frequently unable to work because of it, he managed a long and energetic life (he died at 77) involved in areas such as the betterment of conditions for tubercular patients, campaigning for better water quality, and reporting on food adulteration. Edwy Godwin Clayton's 1908 Arthur Hill Hassall, Physician & Sanitary Reformer (Internet Archive arthurhillhassa00claygoog) is a good short biography. It contains an account of the hospital (see page 45), which arose directly from Hassall's own move to Ventnor in 1866 while recuperating after a near-fatal lung haemorrhage. There's more about Hassall and the hospital in his 1893 autobiography - The Narrative of a Busy Life - which reveals him to be an extremely geeky polymath who took on a humungous workload that would exhaust even a healthy person.

The Ventnor sanatorium - later renamed The Royal National Hospital for Consumption ad Diseases of the Chest - no longer exists; made obsolete by drug treatment of tuberculosis, it was closed in 1964 and demolished in 1969. However, the same climate that benefited TB sufferers enabled the establishment of Ventnor Botanic Garden on its 22-acre site.

It's not a huge general-purpose botanic garden, but a specialist one designed to exploit the conditions of the Undercliff, showcasing plants from the subtropical climate zones of the world (South Africa, The Mediterranean, New Zealand, Australia and Japan). The overall layout is of a roughly east-west vale, with the drier habitats (hosting rock plants, cacti and exotic succulents) on its south-facing northern slope, and moister ones (largely hosting trees and shrubs) in the central vale, which is sheltered from the wind by the wooded higher ground on the coastal boundary of the gardens.

It's not remotely been plain sailing; the planting needed to accommodate the thin chalky soil, and the generally mild microclimate has had spectacular exceptions. The hardest winter for 150 years, in 1986/7, killed around 40% of the plants; and the garden suffered major storm damage in 1987 and 1990. Nevertheless, it's thoroughly flourishing now.

Even if you're not a plant aficionado (and I'm not especially) it's visually interesting and has a delightfully relaxing atmosphere. Admission is free, apart from parking, and it's on the Undercliff bus route between Ventnor and Newport. See the official website: Ventnor Botanic Garden.

I was smug in thinking I recognised this plant as a Pōhutukawa (as mentioned in the previous post, Hutu and Kawa). However, it appears to be a species of Callistemon, as is the yellow one below.
Addendum
Something we somehow missed: the tunnel entrance in the middle of the garden (see Wikimedia Commons). It's not open to the public, but there are pictures at the 28dayslater.co.uk urban exploration forum - Ventnor Hospital Tunnel - Isle of Wight - which explains that it was a chute used by the hospital to dump rubbish in the sea.