The Time of Achamoth 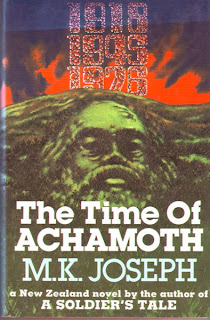 Yesterday afternoon I did a first-pass reading of a book I'm sure I'll return to: Michael Kennedy Joseph's 1977 science fiction novel The Time of Achamoth. MK Joseph (1914-1981) was a British-born New Zealand author and academic who wrote in fairly diverse genres (historical, war, adventure, and SF), all tending to be characterised by erudite historical and literary interests, traditional morality and philosophy, anti-war views, and a distinct interest in experimental writing. I've enthused previously about his experimental SF novel The Hole in the Zero (see The Hole in the Zero and the Update), so it was an opportunity I couldn't miss when I found an affordable UK-sourced copy of The Time of Achamoth on Amazon; it's moderately rare, and was only published in New Zealand.

The Time of Achamoth is a time-travel novel set initially in  near-future New Zealand. It begins with the historian protagonist, Mark Hollister, suddenly finding himself with a rifle in the Waitomo Caves about to shoot an Asian military officer. He doesn't do so, but while fleeing the scene he meets a young man called Harry who somehow knows what has happened. Harry takes him to Tau Station, a secluded research establishment, where he is rapidly recruited into a group called Tempo that is conducting time travel experiments.

Hollister is sceptical, so Tempo offer to send him to "some nice safe neutral spot" as a demonstration. In fact it sends him into the thick of battle in the World War One trenches, where he finds himself as a British officer and only narrowly escapes with his life. On his return, he gets the full explanation: that Tempo is using mental time travel into past lives, mediated by telepathy and the "The Man Upstairs", a shadowy figure from the future.

Hollister goes on three further trips: to the final days of the Paris Commune in 1871; to a jousting tournament (closely modelled on the Eglinton Tournament) at the faux-mediaeval estate of a Victorian aristocrat; and to a house party at a Georgian mansion, where he finds himself using anachronistic methods to solve a murder mystery.

During these trips, it becomes increasingly clear that the Tempo travellers are being attacked by hostile rival travellers from similar projects in the USA and Russia. However, this investigation is curtailed when Hollister returns to find Tau Station under attack by an armed student protest group. While escaping, he is captured in a gas attack, and finds himself imprisoned along with Russian and American travellers, at the Chinese equivalent of Tempo. Although Feng, who heads the project, is initially suspicious, they compare experiences and conclude that they are being set at each other by some unknown party, which is orchestrating the destruction of time travel projects. They agree to cooperate and undertake the dangerous experiment of going forward in time, in the hope of gaining information.

Feng tries, and dies. Hollister goes second, passing through many glimpses of the centuries to come: a dystopian New Zealand of feral teenagers and gated communities; neo-Puritan book burning at Oxford University; a wandering cleric plying airports; a child being told as a bedtime story a far-future mutated retelling of The Emperor's New Clothes; various glimpses of an increasingly decentralised low-population future as humanity eventually reaches the stars ("new planets named such like Poenamo, Elsinore, Merdeka, Kamikaze") ... Ultimately he finds himself in an android body talking to "the Caretaker", who is the "Man Upstairs" who has been guiding the travellers. In fractured English the Caretaker explains to Hollister that their common enemy is a Gnostic sect (headed by the demiurge Achamoth) which seeks to bring about the premature end of humanity by possessing individuals to commit destructive acts at key points in history (this is evidently what had happened to Hollister at the beginning of the novel). In Hollister's era, its instrument is the evil and ancient telepath Achamoth, and the Caretaker gives him a vision of its lair, a stone tomb with a giant head.

Hollister returns to his own time, where he and his colleagues identify the location: Karl Marx's tomb in Highgate Cemetery. Police reports show a recent enigma: the finding in a vault of a giant corpse shot with nylon-tipped arrows, and that of a Russian clerk. Achamoth, it seems, is already dead - but to close the timeline, Hollister and another traveller, Kornilov, have to go back make sure this showdown plays out exactly as history records. Hollister survives the encounter, and finds himself back on his original timeline in the abandoned ruins of Tau Station.

Just viewed as time travel SF, it's a well-constructed novel (its structure is strangely reminiscent of Keith Laumer's Dinosaur Beach). But it works on a number of other levels, primarily as a take on the problem of evil - in fact the same territory as tackled by Colin Wilson in The Mind Parasites, an attempt to explain the perception that history has repeatedly and spectacularly been driven by the dark side of humanity over the past few centuries (the Caretaker and Achamoth are not explicitly identified as God and the Devil, but the implication is there). Joseph's anti-war sentiments also show through, in his vignettes of the horrors of conflict; in a prefatory note, he credits the World War One poets Siegfried Sassoon and Edmund Blunden.

As with The Hole in the Zero and Joseph's mainstream novel I'll Soldier No More, the narrative makes strong use of existential vignettes - snippets of time that Hollister experiences - and Joseph's vivid and erudite prose conveys these powerfully. Many of them appear to be allusions to other writers and works: for instance, Hollister experiences at one point the mind of HG Wells as he coins the word "Morlock", and at another he becomes one of the prisoners in a scene clearly referring to Doré's classic engraving of Newgate Exercise Yard. I'm sure there are other allusions that I haven't yet identified. The Note says:

Frank Jellinek in particular must be the source for the Paris Commune segment; his 1937 The Paris Commune of 1871 is a classic account from a Marxist perspective. Ian Anstruther's 1963 The Knight and the Umbrella undoubtedly informed the segment based on the Eglinton tournament. The book cover is recognisably Karl Marx as depicted on his tomb; the New Zealand Book Council biography mentions that Joseph attended St Aloysius's College, Highgate Hill.


Very little seems to have been written about The Time of Achamoth, but Bruce Alvin King rates it highly in his 1991 The Commonwealth Novel since 1960:


The Hole in the Zero (1967) and The Time of Achamoth (1977) ... were also the first New Zealand novels, possibly since Erewhon, to move into any variety of fantasy, apart from Frame's more psychic variations. Again, Joseph surpassed the realists, for instance, in Achamoth's vivid historical episodes, and in futuristic scenes that rival Wells and Burgess at the same time as they graciously allude to them. Achamoth neatly flips over the conventional role of New Zealand in futuristic fiction as post-cataclysmic haven, by presenting that notion from the local point of view.