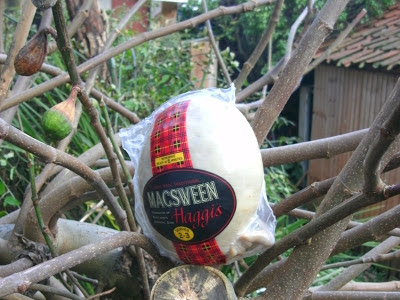 I completely forgot Friday was Burns Night; I like haggis a lot, and it's the one solid excuse in the year to eat it. As luck would have it, however - presumably down to the recent cold weather - I managed to bag a wild one perching in next door's fig tree.

A couple of haggis snippets. Firstly, it's worth reposting the haggis section from Ronald Wright's excellent A Scientific Romance, in the archaeologist protagonist David Lambert, via the HG Wells time machine, travels to 2500AD, and finds the only remaining occupants of a post-apocalyptic Britain to be a tribe of feudal and devoutly religious black Scots, who have an annual mystery play that conflates Christ's passion with Scottish tradition. Their iconography contains a white blond Jesus, whose role Lambert is conscripted to play.


On stage was a table spread with bread, jugs of palm toddy (a new one on me; antique Scotch wasn't the only tipple), and a central plate containing a dark trussed object like a Christmas pudding in bondage. The crowd swarmed at the edge of the platform: wild, eager, fanatical faces, a dark flood from the streets.

In my nervousness, suppressed but not banished by draughts of usquebaugh, my lines deserted me. My eyes flew around in panic, alighted on the crowning ornament of the board. Not a Christmas pud. Nor, exactly, a paschal lamb. It was a haggis - the first - the first I'd seen in Nessie - and Burns came to my rescue. I got to my feet, beamed on the crowd with what I hoped was an expression of
Christly gemütlichkeit, summoned the best stage Scots I could, and stretched out my hand to the blob of dubious meat:

Fair fa' your honest sonsie face,
Great Chieftain o' the pudding-race!
Aboon them a' ye tak' your place,
Painch, tripe, or thairm:
Weel are ye worthy o' a grace
As lang's my arm.

This verse leads me to QI, and a nice translation anecdote.

The first stanza of Address to a Haggis is very well-known, but the poem's not often quoted in its entirety. Here it is:


Fair fa' your honest, sonsie face,
Great chieftain o' the pudding-race!
Aboon them a' yet tak your place,
Painch, tripe, or thairm:
Weel are ye wordy o'a grace
As lang's my arm.

The groaning trencher there ye fill,
Your hurdies like a distant hill,
Your pin was help to mend a mill
In time o'need,
While thro' your pores the dews distil
Like amber bead.

His knife see rustic Labour dight,
An' cut you up wi' ready sleight,
Trenching your gushing entrails bright,
Like ony ditch; And then,
O what a glorious sight,
Warm-reekin', rich!

Then, horn for horn, they stretch an' strive:
Deil tak the hindmost! on they drive,
Till a' their weel-swall'd kytes belyve
Are bent like drums;
Then auld Guidman, maist like to rive,
Bethankit! hums.

Is there that owre his French ragout
Or olio that wad staw a sow,
Or fricassee wad make her spew
Wi' perfect sconner,
Looks down wi' sneering, scornfu' view
On sic a dinner?

Poor devil! see him owre his trash,
As feckles as wither'd rash,
His spindle shank, a guid whip-lash;
His nieve a nit;
Thro' blody flood or field to dash,
how unfit!

But mark the Rustic, haggis-fed,
The trembling earth resounds his tread.
Clap in his walie nieve a blade,
He'll mak it whissle;
An' legs an' arms, an' hands will sned,
Like taps o' trissle.

Ye Pow'rs, wha mak mankind your care,
And dish them out their bill o' fare,
Auld Scotland wants nae skinking ware
That jaups in luggies;
But, if ye wish her gratefu' prayer
Gie her a haggis!

In case anyone's still unclear what goes into haggis, a classic recipe (the first known to appear in print) is in Susanna MacIver's 1787 Cookery and Pastry.

Make the haggies-bag perfectly clean; parboil the draught; boil the liver very well, so as it will grate; dry the meal before before the fire; mince the draught and a pretty large piece of beef very small; grate about half of the liver; mince plenty of the suet and some onions small; mix all these materials very well together, with a handful or two of the dried meal: spread them on the table, and season them properly with salt and mixed spices; take any of the scrapes of beef that is left from mincing, and some of the water that boiled the draught, and make about a choppen of good stock of it; then put all the haggies-meat into the bag, and that broath in it: then sew up the bag; but be fare to- put out all the wind before you sew it quite close. If you think the bag is thin, you may put it in a cloth. If it is a large haggies, it will take at least two hours boiling.
- pages 72-73, Cookery and Pastry, 1787

The "haggies-bag" is the stomach, the "draught" offal - typically heart and lungs. Some modern haggis doesn't follow Mrs MacIver's use of beef meat, and uses offal alone, but the MacSween one, which I prefer and recommend, does.

Contrary to many claims, the origin of the name "haggis" is unknown. The OED says:

Etymology:  Derivation unknown. The analogy of most terms of cookery suggests a French source; but no corresp. French word or form has been found. The conjecture that it represents French hachis ‘hash’, with assimilation to hag, hack, to chop, has apparently no basis of fact; French hachis is not known so early, and the earlier forms of the English word are more remote from it. Whether the word is connected with hag vb. [to cut, hew, chop], evidence does not show.

It's never even been especially Scottish a concept, except in recent tradition. Aristophanes' comedy The Clouds contains an account of an accident Strepsiades, the elderly Athenian protagonist, has with a haggis-like pudding that burst because he hasn't left a steam vent.


Streps. The devil they do! why now the murder's out:
So was I serv'd with a damn'd paunch, I broil'd
On Jove's day last, just such a scurvy trick;
Because, forsooth, not dreaming of your thunder,
I never thought to give the rascal vent,
Bounce! goes the bag, and covers me all over
With filth and ordure till my eyes struck fire.