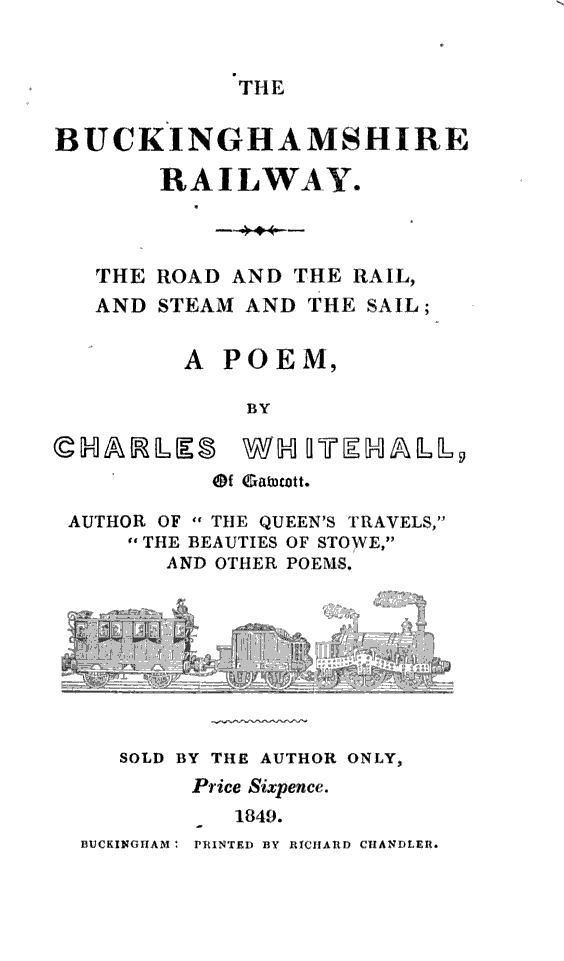 Department of geeky poetry (found while Googling something else): Charles Whitehall's 1849 The Buckinghamshire Railway.


The Author of this little work
A Gardener has been
Most of his life-time has been spent
'Mongst flowers and shrubs so green.

My age now more than sixty is,
And work of late was short;
Thus for some other employment,
To rhyme I did resort.

First I wrote "The Beauties of Stowe,"
With very great success;
Then the Travels of our good Queen,
Indeed they were no less.

And something new this winter did
Across my mind prevail,
To describe the wond'rous benefits
Derived from Steam and Rail.

The Cuttings and Embankments all,
On this, the great Bucks Line;
The Bridges and the Viaducts
Of masonry so fine.

The advantages of travelling,
And great contrast between
The old stage coach, and post-horses,
As on the rail is seen.

And if this meets encouragement,
Which is my expectation,
I'll try and full description give
Of Wolverton's Grand Station.

NOW to describe the great Bucks Line,
I think I'll have a try,
And tell you how the work went on,
Through hills both hard and high;
The embankments stout, and viaducts
The valleys for to cross;
The numerous yards of earth brought there,
Removed by man and horse.
This Line had long time talked of been,
And in Forty-seven began,
Mr. Dixon, the head Engineer
Drew out the final plan.
Then the Surveyor did set to
His level for to gain,
And in good earnest persevered—
George Burnell drew his chain!
Then the Contractors soon appear'd,
Each man his ground to take;
The trees were fell'd, the hedges grubb'd,
Way for the rails to make.
John Tompkins did the first peg drive,
When they did first survey,
And is working for the Company now,

As poetry it ain't great - but I suspect there's a deal of good historical material in there. I haven't been able to find his other works The Queen's Travels and Thoughts in Rhyme on the Beauties of Stowe, and Other Poems, on Various Occasions, but Robert Arnold Aubin's 1936 Topographical poetry in XVIII-century England says of the latter:


Uneducated genius continued to produce — as late as 1844 Charles Whitehall sang the beauties of Stowe in execrable doggerel.